The mismatch between two MRI methods could signify early stroke status, allowing the use of ‘clot-busting’ drug… 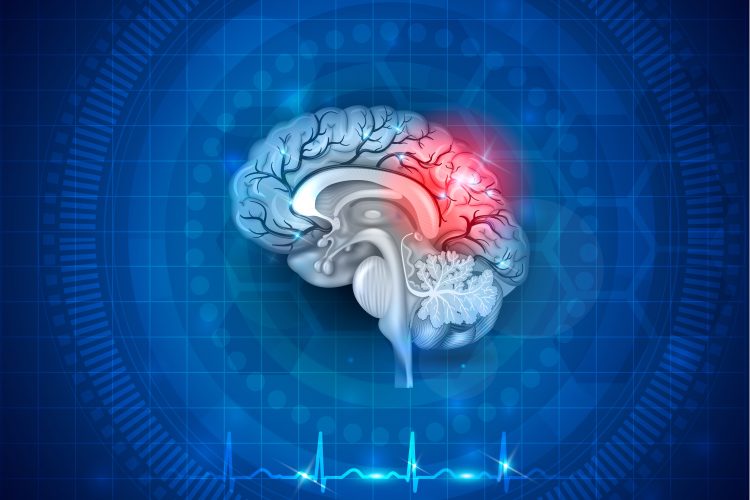 A study led by Massachusetts General Hospital (MGH) investigators may lead to a significant expansion in the number of stroke patients who can safely be treated with intravenous tPA (tissue plasminogen activator), the “clot-busting” drug that has greatly reduced stroke-related disability and deaths in eligible patients.

The report describes the results of a trial using MR-based imaging technologies to identify patients likely to be within 4.5 hours of stroke onset, even though their initial symptoms had not been witnessed. 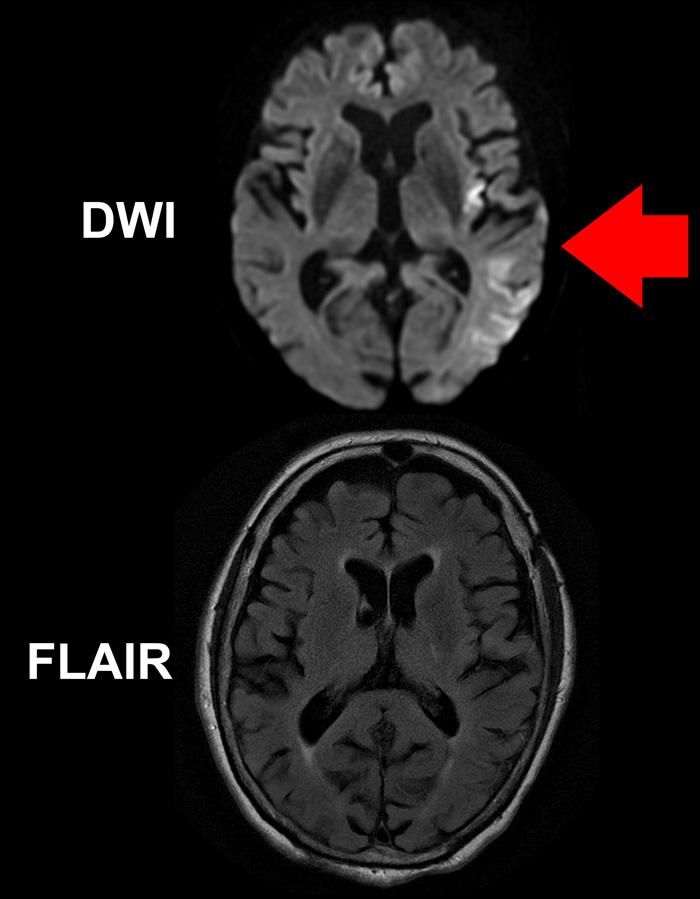 While a DWI MR image (top) of the brain of a stroke patient clearly shows areas of the brain impacted by the stroke (brighter areas indicated by red arrow), the FLAIR image below, taken at the same time, does not reveal obvious acute ischemic damage. The mismatch between the two images implies the patient was imaged within 4.5 hours of symptom onset.  (Ona Wu, Ph.D., Athinoula A. Martinos Center, Massachusetts General Hospital)

“In up to 25 percent of stroke patients, the start of their symptoms is unwitnessed, preventing them from receiving tPA,” says Dr Lee Schwamm, executive vice chair of the MGH Department of Neurology and director of the MGH Comprehensive Stroke Center, co-lead and corresponding author of the paper. “For many of these patients, the first time anything is noticed is when they get up from sleeping. Our study showed – for the first time – that tPA could be given safely to patients with stroke of unwitnessed onset if their imaging suggested the stroke was very early in its progression and they met other treatment criteria. These results pave the way for a large randomised trial of tPA in patients with unwitnessed strokes.”

First approved by the FDA in 1996, tPA – also called alteplase – is used to treat ischemic strokes, which are caused when a blood clot blocks circulation within the brain. The safe use of tPA requires determining that the stroke was not caused by the rupture of a blood vessel, in which case tPA would make matters worse, and that too much time has not gone by between the onset of symptoms and tPA administration, since restoration of blood flow to tissue that has incurred too much damage may cause additional harm.

The original time limit for tPA administration was 3 hours from symptom onset, and the results of a subsequent clinical trial expanded that window to 4.5 hours in 2009. But for patients whose initial symptoms were not witnessed and who were more than 4.5 hours since they were last known to be well, tPA is not approved for use; and this restriction can affect the care of 25 to 30 percent of ischemic stroke patients arriving at hospital emergency departments. A few small studies have reported good outcomes when such patients, specifically those with so-called wake-up strokes, were administered tPA on the basis of MRI studies consistent with the early effects of ischemic stroke.

In the current study, 80 patients with imaging-confirmed ischemic stroke of unwitnessed onset, who were less than 24 hours since they were last known to be well, were enrolled at 14 centers across the US Study eligibility was determined by a mismatch between two types of MR imaging studies – FLAIR, which typically only shows stroke effects on brain tissue after several hours of reduced blood flow, and diffusion-weighted imaging (DWI), a technique first applied to stroke patients at the MGH-based Athinoula A. Martinos Center for Biomedical Imaging that is extremely sensitive to changes beginning in the first minutes or hours after stroke onset.

Study co-lead author Dr Ona Wu, of the Martinos Center explains, “Brain tissue that is abnormal on DWI but not yet abnormal on FLAIR has been seen in patients that were 4 hours or less after known symptom onset. That discrepancy provides a snapshot of tissue evolution as the stroke progresses in the first few hours, and that is the pattern we used to select patients for treatment since they were likely to be similar to patients with known symptom onset who have benefited from tPA. Essentially we used an MR Witness – the name of the trial – to identify patients who might be treated with tPA because their strokes had not progressed to the point of irreversible injury.”

The outcomes for study participants – all of whom received tPA on the basis of the strategy that the research team calls qDFM, for quantitative DWI FLAIR Mismatch – were similar to those previously reported for patients receiving tPA within 4.5 hours of witnessed strokes. The authors note that more than 70 percent of study participants had experienced wake-up strokes, and that the onset of symptoms may have led to the patients’ awakening. On the basis of these results, the researchers hope to conduct a follow-up, placebo-controlled trial that will also compare MR with CT imaging for the identification of patients with unwitnessed strokes who could safely and effectively be treated with tPA.

“If that phase 3 study is successful, it would lead to a paradigm shift in the way acute stroke patients are treated,” says Schwamm, who is a professor of Neurology at Harvard Medical School. “Rather than treating based on the number of hours since a stroke began, we can treat based on how much damage the stroke has already caused and how much brain can still be saved. Because the imaging methods we will use in our phase 3 study are available on any MRI or CT scanner in use today, if the results of that trial are positive, the approach could be put into practice immediately.”

The study has been published online in Annals of Neurology.