Disulphide bonds between cysteines play a critical role in the stability and activity of therapeutic antibodies. Here, Dr Ioannis Papayannopoulos, Principal Scientist at Dragonfly Therapeutics, describes the characterisation of the oxidation state of cysteines and formed disulphides in therapeutic antibody drugs.

DISULPHIDE BONDS in proteins are covalent bonds between two sulphur atoms of the thiol (sulphhydryl) groups that are present on the side chains of cysteines. These cysteines can be far apart along the amino acid sequence, but proteins are not linear molecules and owing to twists and turns in the polypeptide chains (helices, sheets and folds), two cysteines can come into close proximity to form a disulphide bond, the length of which is typically about 2.05A. It is important to keep this in mind, as conventional graphical representations of disulphide bonds (eg, in antibodies, see Figure 1) can suggest that these covalent bonds are very long.

Properly formed disulphide bonds provide stability to the tertiary structure of a protein in its native state by limiting the availability of improperly folded protein conformations.1,2 Improper protein folding can be detrimental to stability, adversely affect activity and may result in immunogenicity. This is quite critical for protein therapeutics such as monoclonal antibody (mAb) drugs, which consist of two heavy and two light chains, and contain multiple inter- and intra-chain disulphide bonds (Figure 1). 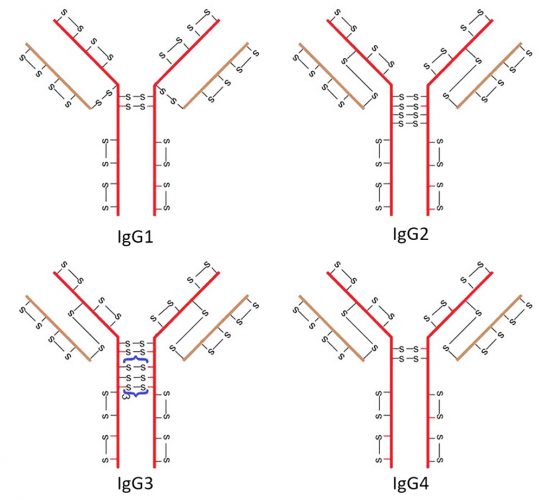 Figure 1: Schematic representation of the major immunoglobulin G (IgG) subclasses. Each IgG consists of two heavy chains (red) and two light chains (brown). Inter-chain and intrachain disulphide bonds (shown as -S—S-) link the four chains and also stabilise the tertiary structure of the molecule. Of these, IgG1-type and some IgG2-type molecules are those typically developed as therapeutics.

Read this article in full