Within four years since their first application in mammalian cell culture, small interfering RNAs (siRNAs) have become essential tools for the analysis of gene function in biomedical sciences. Improvements in chemical RNA synthesis, as well as of delivery systems for siRNAs, has considerably facilitated the application of siRNAs in cell culture. The development of expression cassettes, in combination with the establishment of viral transfection systems for the stable intracellular expression of small hairpin RNAs, provides interesting alternatives to the transient application of preformed siRNAs. Furthermore, the generation of powerful algorithms for the prediction of highly active and specific siRNAs has considerably facilitated siRNA design. As a result of these progresses and due to the high efficiency of such designed siRNAs and the excellent reproducibility of the observed effects, both siRNAs and shRNAs are now widely used for target validation in pharmaceutical chemistry. Moreover, the application of siRNA arrays for the identification of genes involved in cellular processes, such as proliferation, demonstrate the power of RNA interference, not only in the study of a single gene which is implied in a given pathway, but also in the search for new genes not proposed to be involved in a process or pathology so far1.

However, a major fraction of such therapeutically interesting genes cannot be efficiently modulated by, for instance, small molecules with favourable pharmacokinetics. Often, the products of such a gene (RNA or protein) are not ‘drugable’. This leaves the pharmaceutical scientist with the unsatisfying situation that the target is known, but the bullet is missing. Alternatively, one may wish to inhibit only a specific isoform without affecting other isoforms, which may be difficult to achieve with small molecular weight inhibitors. Thus, a bullet is needed but only lead shot is available. In such a situation, it is tempting to think of agents as possible therapeutics that already efficiently and specifically inhibit the gene function in the validation process, but which have unfavourable pharmacological properties in vivo. As already stated, it is comparably easy to design specific and efficient siRNAs. However, their use in therapeutic applications is hampered by low stability in body fluids, very short circulation times in the bloodstream due to rapid renal secretion and inefficient cellular uptake. Despite these limitations, siRNAs are currently making their way through the clinical protocols. This review focuses on the possible therapeutic applications of chemically synthesised siRNAs. The therapeutic application of siRNAs is particularly promising for those diseases where other types of compounds do not exhibit a sufficiently high activity or specificity. For instance, leukaemic fusion genes encoding transcription factors, such as AML1/MTG8, are good examples for potentially valuable therapeutic targets with poor ‘drugability’.

Certain types of therapeutic settings may only require the ex vivo manipulation of cells or tissues with siRNAs. For instance, antileukaemic siRNAs might be used for the purging of haematopoetic stem cells in autologous stem cell transplantation protocols. In such cases, siRNA delivery might be achieved by conventional transfection protocols such as electroporation2. However, the majority of possible applications demand the systemic delivery of therapeutic siRNAs. Currently, the most frequent mode of siRNA delivery in vivo employs the so-called hydrodynamic injection. In this case, a rather large volume of several milliliters of siRNA containing solution is injected within a few seconds into the tail vein of mice. This protocol permits an efficient siRNA delivery particularly to the liver tissue, but is of very limited use for the application in humans. Alternatively, much smaller volumes (200µl or less) of siRNAs may be repeatedly administered by either intravenous or intraperitoneal injection. In each of these protocols, the siRNAs are injected without any transfection agent. The efficacy of, in particular, the intravenous delivery of ‘naked’ siRNAs is limited by poor pharmacokinetics due to rapid renal secretion and to low siRNA stability in body fluids including blood serum3. Nevertheless, several reports describe significant effects in murine disease models upon the delivery of free, unmodified siRNAs4-6. Improved in vivo performance due to chemical modification was shown for siRNA targeting the mouse apolipoprotein B (apoB) gene7. Here, a combination of only three phosphorothioates in the backbone and two 2’-O-methyl groups at ribose sugars gave sufficient protection against exo- and endonuclease degradation. However, this alone was not sufficient to achieve detectable gene silencing in vivo after intravenous injection. In this case, the additional conjugation of a cholesterol moiety to one RNA strand was necessary to deposit sufficient amounts of siRNA in liver and jejunum. Only siRNA harbouring the three types of modifications together, led to inhibition of apoB gene expression in both organs. As a consequence, decreased lipoprotein and cholesterol levels in blood plasma were also achieved. For in vivo applications, increased resistance of siRNA against nucleases were also obtained by using 2’-fluoro8 or 2’-O-methoxyethyl9 modifications of ribose. Locked nucleic acids (LNA) contain a methylene linkage between 2’ and 4’ positions of the ribose. SiRNA containing LNA substitutions possess higher melting temperatures, thus indicating a higher intrinsic stability10. Improved cell delivery of conjugated siRNA was not only observed for cholesterol, but also for lithochloic acid and lauric acid11. Alternative approaches for the systemic siRNA delivery employ transfection agents such as cationic lipids, polyethylenimine (PEI) or its conjugates with polyethylene glycol (PEG) derivatives12-15. All these cationic agents facilitate the endosomal siRNA uptake and the escape of the siRNA from the endosome into the cytoplasm. Particularly the PEI-PEG conjugates show extended circulation times in the blood stream. Those nanoparticles may be modified by the covalent attachment of ligands, such as RGD peptides, to enhance uptake and to specifically target diseased tissues13. Recently, two groups described the efficient intratumourally delivery of siRNA using atelocollagen, a type I collagen derived from calf dermis16,17. Collagen-mediated siRNA administration may be a promising route for the local application of siRNAs.

In this review, we have discussed several examples of therapeutically promising siRNAs and possibilities of administrating them to diseased tissues. The breath-taking progress of taking siRNAs into clinics, however, is based on the experience gained with other antisense molecules such as oligonucleotides and ribozymes. In this respect, one should not forget that many problems such as limited specificity and off-target effects now associated with siRNAs are well known for other oligonucleotide-based technologies as well. Nevertheless, siRNAs will probably be used to complement existing treatment protocols or to establish new treatment modalities. For instance, several reports describe the synergistic effects of siRNA-mediated gene suppression and chemotherapy both in cell culture and in animal models6,36,37. Nevertheless, be it by itself or in combination with other therapeutic agents, RNA interference will very likely expand our possibilities to combat human diseases.

I thank Matthias John for his major input into this article. Work in the author’s laboratory is supported by the Deutsche Krebshilfe (10-2104-He2), the Deutsche José Carreras Leukämiestiftung (DJCLS-R03/10) and the Wilhelm-Sander-Stiftung (2003.169.1). 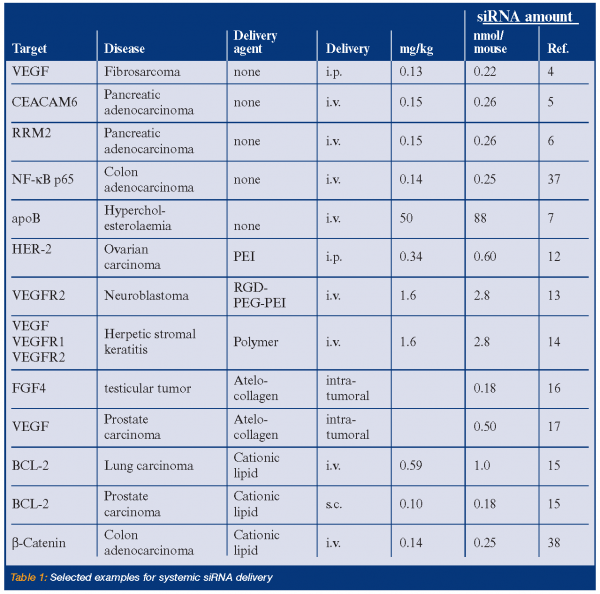