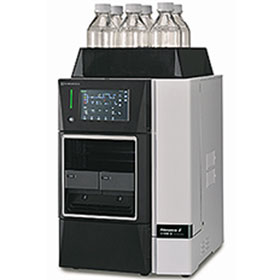 Innovative, intuitive and intelligent functionality advances HPLC for labs of the future

The i-Series systems feature innovative, intuitive and intelligent design so users can begin building the lab of the future. Through the integration of these systems with LabSolutions software, Shimadzu fosters a new relationship between users and instrumentation. The data acquired by the Prominence-i and Nexera-i via interactive communication mode (ICM) is sent to a lab’s data center by the LabSolutions network and managed uniformly by a server.

ICM allows users to perform operations such as purging mobile phases and confirming analytical results from anywhere in the facility with a smart device. It also permits easy access to a system installed in a closely supervised area such as under a hood where highly active ingredients are being analyzed.

The i-Series also allows the direct injection of highly concentrated samples without dilution. Even when injecting ultra-low sample volumes, the systems provide repeatability of 1% or less. In addition, by supporting high-speed multi-analyte processing with a 14-second injection cycle time, the i-Series achieves processing speeds more than twice as fast as previous Shimadzu systems and almost three times faster than other systems.

Users can also achieve easier operation with the i-Series thanks to LabSolutions. The uniform graphical user interface on both the integrated touch screen and the LabSolutions computer screen allows users to easily create analytical methods using the same workflow. Additionally, the quick batch function simplifies batch file creation by permitting users to create batch files while checking the vial positions through the window.

The i-Series smart features also increase work efficiencies for users while providing a built-in ECO mode for saving costs. The entire series of analytical operations can be automated from system startup, including mobile phase purging, column equilibration in preparation for starting measurements, and starting and shutting down analysis. Operations for routine analysis such as injecting samples based on test results can also be automated.

The i-Series can be used for a wide range of industries such as pharmaceutical, biopharmaceutical, chemical, environmental, food, and academic teaching.