Posted: 29 May 2020 | Victoria Rees (European Pharmaceutical Review) | No comments yet

Scientists have designed and synthesised chains of molecules for the purpose of drug delivery with a precise sequence and length to protect DNA nanostructures from degradation under biomedically relevant conditions. 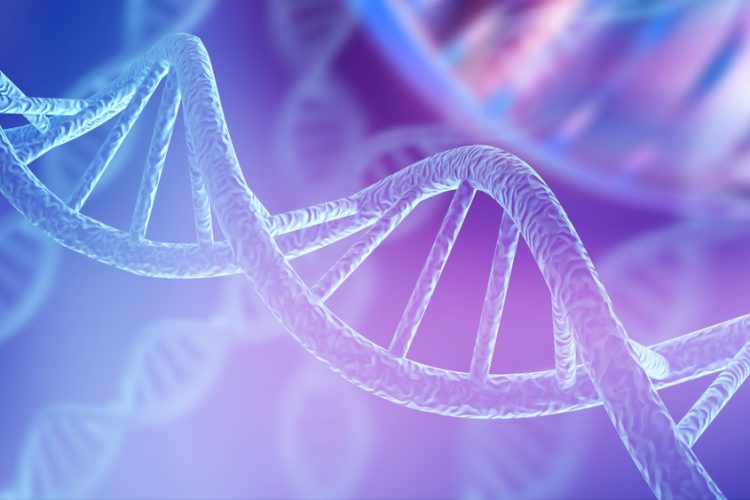 Although safe and effective drugs can be developed, guaranteeing that they target the correct area of the body is another challenge altogether. Scientists at the Brookhaven National Laboratory in the US have now developed a method for formulating peptoids, stabilising DNA origami in physiological environments, to ensure the targeted delivery of therapeutics.

In their paper, published in the Proceedings of the National Academy of Sciences, the researchers demonstrated how these ‘peptoid-coated DNA origami’ have the potential to be used for delivering anti-cancer drugs and proteins while targeting cell-surface receptors implicated in cancer.

“DNA nanotechnology allows us to fabricate precise nano-architectures, which has the potential to tailor how nano-objects interact with biomolecules and cells. However, their use in biomedical applications is challenging due the limited structural integrity of the DNA architectures in complex biological fluids. We show our designed peptoids, with simple and minimal structures, can efficiently stabilise a three-dimensional (3D) DNA construct in biological solutions, without masking or limiting the design of the DNA shapes. Additionally, we went one step further to show that peptoid-coated DNA structures offer the control over anti-cancer drug release,” explained first author Shih-Ting (Christine) Wang, a postdoc in the Soft and Bio Nanomaterials Group of the Center for Functional Nanomaterials (CFN) at the Brookhaven National Laboratory, when speaking to Drug Target Review.

What is DNA origami?

…peptoids are more flexible, owing to the lack of hydrogen bonds in the backbone”

The researchers explain that DNA origami is the folding of long, flexible DNA chains into desired shapes at the nanoscale by linking different parts of the chain with the complementary base pairs of short DNA strands. According to the scientists, these programmable and precisely controlled nanoscale architectures could be beneficial for many biomedical applications, including the targeted delivery of drugs and genes to desired tissues or cells. However, enabling such applications requires solutions for protecting the DNA origami structures in complex biological fluids and enabling new functions that are not inherent to DNA.

The researchers highlighted that one of the limiting factors when applying the structure and shape benefits of DNA origami to nanomedicine is that, placed inside the human body, the DNA nanostructure can be digested by enzymes or degraded in response to changes in solution composition or pH level.

To address this, the researchers made biocompatible molecules called peptoids with a well-defined molecular sequence composition and length. They then coated octahedral-shaped DNA origami, which has high mechanical stability and a large open space for carrying nanoscale cargo such as small-molecule anti-cancer drugs, with these peptoids. The peptoid coatings effectively protected the DNA origami in various physiological conditions and supported the addition of different chemical functionalities.

According to the researchers, the peptoids resemble peptides. However, in peptoids, the side chains of chemical groups attached to the main chain or backbone of the molecule are attached to nitrogen rather than to carbon. Furthermore, peptoids are more flexible, owing to the lack of hydrogen bonds in the backbone. This flexibility can be leveraged to control how they bind to the DNA origami.

Making a bulky coating would change the structure’s shape and how it interacts with and accommodates other biomolecules and the origami would be affected, introducing a variety of complications, highlight the researchers. Therefore, their goal was to make a minimalistic coating that would not add bulk to the origami but also offer enough protection, solubility and compatibility with different biofunctions. 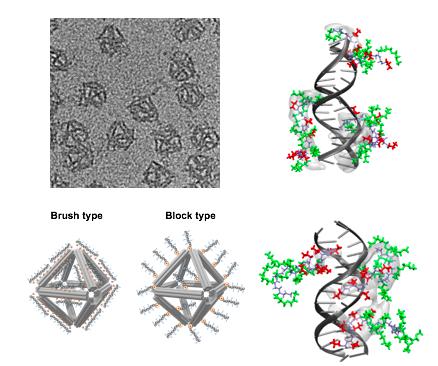 “We first designed and hypothesised several peptoid sequences that contain domains of DNA-interacting and water-soluble molecules for DNA protection and then we reached out to a team at the Molecular Foundry (LBNL) which has expertise in peptoids synthesis and worked with them to synthesise peptoids using their automated synthesis facility,” said corresponding author Oleg Gang, leader of the CFN Soft and Bio Nanomaterials Group and a professor of chemical engineering and of applied physics and materials science at Columbia Engineering, to Drug Target Review.

The researchers synthesised two kinds of peptoid architectures for the protection of DNA origami: brush type and block type. Both architectures have a DNA binding domain (positively charged which binds to the negatively charged DNA) and a water-soluble domain (which ensures DNA is surrounded by water molecules, required for stabilisation). The brush-type architecture alternates between these two domains, while the block-type architecture clusters them to form distinct ‘blocks’.

“We first understood the peptoid interaction with a double-stranded DNA using a fluorescence assay and molecular dynamics simulations and showed that different peptoid architectures can have a different effect on DNA,” added Gang.

To determine which type was better at providing protection, the scientists studied the binding between duplex DNA and peptoids. Experiments with fluorescent dye showed that a specific brush-type architecture was most efficient at stabilising duplex DNA coated with peptoids at high temperature.

According to the scientists, it is most likely that the alternating structure achieved a balance as some pieces sat within the groove of the DNA double-helix structure to confer protection, while the other pieces stuck out to interact favourably with the water. Therefore, the researchers concluded that the optimal configuration is the brush type with 12 DNA-binding and 12 water-soluble groups.

For their experiments, the team used a combination of techniques: agarose gel electrophoresis, a method for separating DNA fragments (or other macromolecules) on the basis of their charge and size; transmission electron microscopy imaging and dynamic light scattering at the CFN; and real-time small-angle X-ray scattering at the Life Science X-ray Scattering (LiX) beamline of Brookhaven’s National Synchrotron Light Source II (NSLS-II). The results indicated that the structure of the origami remained intact after it was coated with specifically designed peptoids and placed in the different physiological conditions.

Following these experiments, the scientists conducted a series of demonstrations in collaboration with researchers at Stanford University, US, to explore how the peptoid-coated origami could be used in biomedical applications. For example, they loaded the chemotherapy drug doxorubicin into the coated origami. Doxorubicin is one of the commonly administered drugs to patients with HER2-positive breast cancer.

“Doxorubicin is known to insert into the DNA backbone in a reversible way and thus drugs can be loaded into a DNA structure at high yield. We showed a continued drug release from the origami structure over a 48 hour experimental time and released less of the doxorubicin than its non-coated counterpart, as measured through the intensity of the drug’s intrinsic fluorescence. Peptoid-coated origamis therefore have the potential to reduce unfavourable release by protecting integrity of the structure in biological solutions,” said Wang. 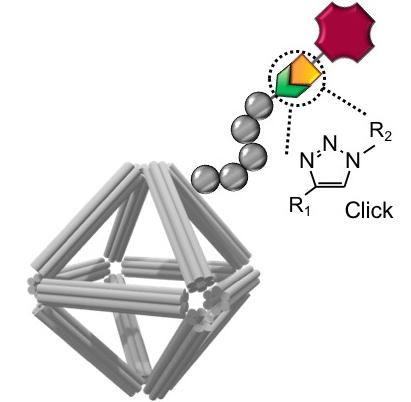 A schematic showing how “alkyne” reactive groups incorporated into peptoid sequences coating the DNA origami can conjugate with fluorophore-labeled nanocargo (such as trastuzumab) that have been modified with “azide” chemical groups (red shape). Through alkyne-azide click-chemistry reactions, the surface of peptoid-coated DNA origami can be functionalised [credit: Brookhaven National Laboratory].

In a second nanocargo demonstration, the researchers investigated whether proteins could be delivered in a similar way. They encapsulated a cow-derived protein (attached to fluorescent molecules for visualisation) inside the coated origami in the presence of the protein-digesting enzyme trypsin. Digestion of this encapsulated protein by trypsin was reduced and slowed due to a combination of the DNA origami itself and the peptoid coating.

Lastly, the team functionalised the surface of the peptoid-coated DNA origami with trastuzumab, an antibody that targets HER2 receptors. Upon binding to these receptors, trastuzumab blocks the cancer cells from receiving the chemical signals they need to grow. The researchers achieved the surface functionalisation by adding chemical groups to specific sites on the trastuzumab molecule and into the peptoid sequences. These groups selectively reacted to form covalent bonds.

“We are currently testing ex vivo targeted drug delivery using the peptoid-coated DNA origami system for treating breast cancer cells with our collaborator at Stanford University. We anticipate demonstrating a potential of structure-defined 3D DNA systems for controlled targeting and drug delivery for therapeutic applications and will expand into other biomedical applications,” said Gang.

“We believe that we can further develop targeted DNA design through the attachment of cell-recognising ligands or antibodies that will allow a targeted delivery,” commented Wang.

Brookhaven’s Intellectual Property Legal Group has recently submitted a provisional patent application for the peptoid design methodology to the US Patent and Trademark Office.