A new field in biomarker discovery and target identification

So far approximately 480 miRNAs have been identified in humans, with the total predicted number to be 1000 or more. They are very well conserved by evolution – many sequences being identical across species, indicating that these small RNA molecules have been involved in the regulation of mRNA function for a long time. The importance of miRNAs in biology has likely been missed so far due to their small size, the difficulties involved in purifying and detecting them and the fact that inactivating mutations had not been discovered. However, the development of new technologies has seen an explosion in miRNA research and a link between miRNAs and disease, especially cancer, has been firmly established. An example of one such technology is the miRCURYTM LNA product line from Exiqon. So far, miRNAs have been shown to be potentially important as cancer biomarkers as well as possible targets for therapies.

miRNAs are expressed either as single copy or multi (poly)-cistronic transcripts and can be found as independent genes or within introns (or even exons) of other genes (Figure 1). The primary transcript (or pri-miRNA) contains a stem-loop structure which is released from the rest of the transcript by a nuclear RNaseIII complex (Drosha-DGCR8) to form the precursor or pre-miRNA. Following export into the cytoplasm, the pre-miRNA is further processed by another RNase complex (Dicer-TRBP) into a ~22 nt miRNA duplex. Mature miRNAs are incorporated into an effector complex known as RISC (RNA induced silencing complex) and converted into single strands ready to target mRNAs.

Each miRNA potentially has up to 200 mRNA targets and it has been predicted that most human genes will probably be influenced in some way by miRNAs. Prediction and validation of miRNA targets is however one of the more difficult tasks within the field. miRNAs bind to the 3’ untranslated region (UTR) of target mRNAs, but the binding sites are frequently not perfectly complimentary to the miRNA sequence. A seed sequence of approximately 6-8bp towards the 5’ end of the miRNA sequence is thought to be important for target recognition. The fact that multiple miRNAs may bind the same target adds further complexity to target prediction.

The function of miRNAs is post-transcriptional regulation of target mRNAs. It is believed that most miRNAs function by blocking mRNA translation and reducing the levels of protein produced without affecting the level of mRNA significantly. However, it also seems that some miRNAs do cause degradation of mRNAs when the binding site and miRNA sequence are perfectly complimentary. In addition it has been suggested that multiple miRNAs may act synergistically to inhibit or fine-tune protein expression.

The biological function of most miRNAs is still unknown, especially in mammals. The first miRNAs to be studied in model organisms such as worms (C. elegans), fruit flies (Drosophila melanogaster) and zebra fish (Danio rerio) have important functions during development in the coordination of cell proliferation, cell death and differentiation. miRNA expression profiles vary between different tissues and during development and it has been suggested that miRNAs may have important roles in differentiation. It is no surprise therefore, that miRNAs have also been implicated in cancer and other diseases.

New technologies for microRNA research based on Locked Nucleic AcidsTM

As discussed above, microRNAs are emerging as important new class biomarkers for diagnostics and prognostics as well as possible targets for therapies in cancer and other diseases. However, miRNAs present a number of new challenges in terms of microarray expression profiling, a commonly used tool for identification of new biomarkers and targets. Due to their small size and relatively low abundance, miRNAs are difficult to detect and capture on microarrays. In addition, many miRNAs are very similar in sequence, varying by only one or two base pairs. The short length of miRNA sequences leaves little room for probe optimisation. Researchers at Exiqon A/S in Denmark have harnessed the power of Locked Nucleic Acids (LNA) in order to develop unique new products to enable miRNA profiling and detection.

Locked Nucleic Acids (LNA™) are a class of nucleic acid analogues in which the ribose ring is ‘locked’ by a methylene bridge connecting the 2’-O atom with the 4’-C atom (Figure 2). LNA™ nucleosides have the same chemical properties as DNA and RNA and are able to form base-pairs according to standard Watson-Crick base pairing rules. The incorporation of LNATM into an Oligonucleotide probe greatly increases the affinity of that oligonucleotide for it’s complementary DNA or RNA target. This feature has allowed the capture probes of the miRCURYTM LNA Array to be designed with a uniform high melting temperature. The arrays are run under stringent conditions, which not only allows highly sensitive and accurate detection of miRNA expression, but also increases the specificity of the capture probes for closely related miRNAs. By using careful design rules regarding the incorporation of LNATM, the capture probes are able to distinguish effectively between microRNAs of 22 nt with a single mismatch.

The miRCURYTM LNA Array (Figure 3) can be used for expression profiling of microRNAs in, for example, different tissues, in tumour versus normal samples or in samples before and after treatment. In order to stay at the forefront of miRNA research, the probe content of the miRCURYTM LNA array is regularly updated to contain all officially annotated miRNAs. The array is capable of detecting miRNAs down to 50 attomole concentration. Due to the high sensitivity, microRNA expression profiling can be performed on as little as 1µg of total RNA, which means that microRNA expression profiling may be performed even from rare or precious samples. There is no need for any enrichment procedure, which could lead to the introduction of artifacts. In fact, the mRNA labeling kit, which has been especially developed for use with the arrays, reduces handling steps to a minimum to ensure highly reproducible results. The array design also incorporates several positive and negative controls to allow quality assessment of the results.

In collaboration with researchers at Herlev University Hospital in Denmark, the miRCURYTM LNA arrays have already been used to analyse miRNA expression patterns in tumour and normal breast tissue. Numerous differentially expressed miRNAs were revealed, including those previously reported to be associated with breast cancer (Figure 4). In addition, several miRNAs that had not previously been connected with breast cancer were identified. Some of these novel miRNA signatures could have diagnostic and prognostic potential for breast cancer patients. The results from the expression profiling study have been confirmed using other methods for miRNA detection. The advantages of LNATM have also been incorporated in detection probes that allow the visualisation of miRNAs by in situ hybridisation or Northern blotting.

To allow researchers to gain access to the LNA TM -based technology without having to invest time and money into setting up facilities for microarray analysis in their own laboratories, an miRNA profiling service is offered. The profiling service thereby offers the advantages of obtaining reliable miRNA expression profiles for biomarker or target identification even more rapidly. Included in the tailor made service is advice and consultation concerning experimental design from experts with broad experience in miRNA expression analysis. A quality control of RNA samples is included in the service and the experiments are performed using automated equipment to ensure high reproducibility. The results from the profiling are analysed and presented in a final report, which also includes quality assessment of experiments.

The use of new technologies to overcome many of the initial challenges in miRNA research, should allow comprehensive studies of miRNA expression patterns and the identification of miRNA biomarkers in cancer and other diseases over the next few years. It is thought that the functional importance of miRNAs could be as great or even greater than other players in gene regulation such as transcription factors and epigenetics. miRNAs could, of course, also be potential targets for therapy, although more knowledge about miRNA function in the biology of cancer and other diseases is first required. Reagents for studying the in vivo effects of miRNAs will be an invaluable tool in this respect. Such reagents can be used to study the effect of miRNA loss of function in vivo. 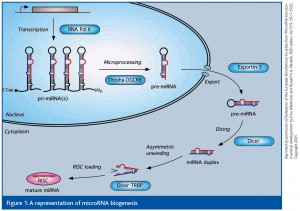 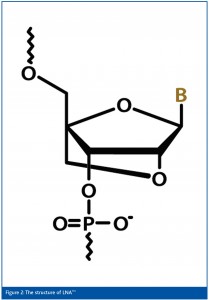 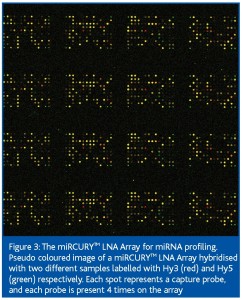 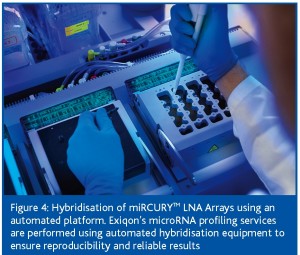