Historically, nasal therapy has focused on the provision of low cost, over the counter, local treatments for nasal allergy and congestion. However, emerging interest in using the nose as a gateway into the blood stream, immune system and even directly into the brain has sparked development of new opportunities, companies and products. While once-daily tablets and capsules remain the drug delivery vehicle of choice, they are sometimes impractical. Acid or enzyme degradation, or a simple inability to penetrate the gastrointestinal mucosa, force the owners of promising new vaccines, bio-molecules or fragile small molecules to seek an alternative way into the body. If the molecule has to act quickly to be effective, but its indication does not justify injection, most companies with molecules that are unstable or incapable of being absorbed sooner or later look at nasal or pulmonary delivery.

While pulmonary drug delivery accounts for a larger share of the pharmaceutical market (as there are more products and most are prescription only, not OTC) and certainly dominates research into aerosol-based delivery systems, there are compelling reasons for a company to attempt development of a nasal product. (Table 1) Whatever the reason, the range of approved nasally administered drugs is increasing and there are some interesting possibilities in the pipeline. The ability of nasally administered drugs to be absorbed into the blood stream is established in humans, and sumatriptan, calcitonin, desmopressin, nicotine and several other agents are commercially available. To be a candidate for this route, doses must be small and the drug absorbed before a combination of mechanical and ciliary clearance mechanisms remove it. Strategies to increase efficacy range from increased viscosity of sprayed formulations or bioadhesives to slow ciliary transport and reduce dripping; increased coverage of the nasal mucosa to maximise the area available for absorption, or the use of absorption enhancers to speed drug penetration2,3,4. The latter is somewhat controversial due to the risk of defeating the nose’s protective action against harmful inhaled antigens, pathogens or chemical toxins and few companies promoting this approach can support the high cost of demonstrating the safety of their proprietary excipients alone. A similar problem plagues companies who would enhance the solubility (and hence absorption rate or bioavailability) of an otherwise suspended drug through the use of solubility enhancing inclusion complexes (such as cyclodextrins), or phospholipids, polymer or surfactant based liposome, nanoparticle, nanocrystal or other molecular aggregates. While nasal delivery offers promise, it has been slower to demonstrate proof of concept in humans of ideas explored in animals. There are unique challenges extrapolating findings from a myriad of animal models – each with distinct anatomical and histological features, to humans. That said, some exciting possibilities have come to light.

Parkinson’s and Alzheimer’s diseases, plus brain cancers represent high value therapeutic opportunities potentially treatable via the nose – if it is possible to defeat the blood-brain barrier by taking advantage of the incomplete cribiform membrane that reportedly separates the CSF from the olfactory region of the nose. Debate rages about the applicability of animal models showing that anesthetics, chemotherapeutics, opiates and peptides reach the CSF faster than can be explained by diffusion across the BBB.

FluMist (MedImmune) has shown the viability of nasal vaccination, without the need for injection. If the immune response is stronger and/or longer lasting and provision of aseptic delivery less critical, the windfall opportunity presented by this season’s supply problems with injectable flu vaccine will raise the profile of nasal immunisation.

Historically, attempts to deliver nebulised aerosols into the sinuses have remained the province of off-label applications by ear, nose and throat specialists. Several recent studies have more formally attempted to document the delivery of drugs, via the nose, to the maxillary sinus through manipulation of droplet size or the use of pulsed pressure waves superimposed on the inhaled air stream. In general, delivery efficiency is low as demonstrated by in vitro models5, but the market for sinus delivery of decongestants, corticosteroids and antibiotics is large and certain to maintain the interest of several companies.

When rapid onset is required, but injection is unwarranted, the nose and lung are obvious targets. For example, a benzodiazepine nasal spray could be readily delivered in an emergency situation to an individual having a seizure. In some ways, smelling salts may have paved the way to inhaled treatments as diverse as erectile dysfunction and dypsnea. Bringing new products to the US market, be they new drugs or generic copies, has not been easy for would-be manufacturers – even for simple locally acting aqueous solutions. Several FDA guidance documents have highlighted the problems in demonstrating both bioavailability and bioequivalence for locally acting drugs6,7. In short, detecting small drug doses in the bloodstream is analytically challenging and provides little information about drug concentrations in specific regions of the nose. Inter-subject variability, compounded by uncertain breathing patterns and cyclic redistribution of inhaled air through either nostril every 3-4 hours8; and the unknown influence of head position, spray nozzle insertion angle or depth, on the ultimate site of deposition have forced evaluation of products based on a range of in vitro tests. While reducing anatomical or patient-induced inconsistency, the ability of droplet size, spray pattern and plume geometry results to predict the likelihood of equivalent efficacy has not been established (see Panel 1). The emergence of nasally administered suspension products, for which no test of dissolution behavior exists and the need to demonstrate specific regional deposition in the nose, will probably drive the need for new in vitro evaluation tools. Nasal scintigraphy has been used for several years to elucidate sites of initial deposition9 and, more recently, magnetic resonance imaging (MRI) is being used to generate the virtual geometry in which sophisticated computational fluid dynamics models attempt to predict deposition10. These theoretical models, together with cadaver or MRI-derived casts are providing new insights into where aerosol goes. Ultimately, to be useful, they must be validated and sophisticated enough to predict deposition in the olfactory region or sinuses, while providing an assurance that unintended pulmonary deposition is minimal. Until then, they remain confidence building tools that can guide a formulation or regulatory scientist, but not really prove anything. Such guidance is useful, however. The influence of those parameters that are impossible (due to cost or design complexity) to investigate in the clinic can be studied in silico or in vitro and new insights developed. Up until now, guesses (and they seem to have been just that) about how a patient should be instructed to use a nasal spray; what angle the tip should meet the nose, or what concentration of viscosity enhancing polymer should be incorporated, have prevailed. In the future we may have tools which allow rational selection of formulation excipients, based on their known impact on aerosolisation properties and site of deposition (see Panel 2). What will deliver such new drugs and formulations? The choice of nasal delivery device is based on many factors. Reliability, reproducibility, capability, ease of patient use, acceptability and, of course, cost. Recent product introductions have been mostly nasal sprays atomising aqueous formulations. These have evolved from being crude volumetric pumps susceptible to the vagaries of the way patients assembled and used them, into sophisticated, ready-to-spray devices able to perform reliably in the hands of most users (Figure 2) (see Panel 3). The most sophisticated among them can detect partial doses and have shapes that patients intuitively orient correctly prior to use. FluMist and Zomig, as shown in Figure 3, are early-adopters of sprayed unit dose technology that does not require chemical preservation – a concept that innovative manufacturers are now attempting to extend to multidose nasal products. A small number of companies have elected to retain nasal drops or reformulate pressurised nasal aerosol products using hydrofluoroalkanes11. The long-term popularity of the latter strategy remains to be seen – particularly if it impedes the transition from prescription-only to OTC as the product matures (perhaps due to concerns about increased, undesirable lung deposition). Nasally administered metered powders, while currently representing a small fraction of the market, may increase in popularity. The inherent stability of drugs in powder form, or the intriguing possibility of completely avoiding pulmonary deposition if DirectHalerTM Nasal (a unit dose powder inhaler in which a patient blows drug through a straw into their own nose as they exhale) becomes popular, suggests that powders may have an expanding role in nasal delivery. There seem to be numerous opportunities left to hit this most prominent of targets!

The authors would like to thank Pierre Carlotti and Laurence Peyronnet from Valois Pharmaceutical Division for their suggestions and permission to reproduce figures. 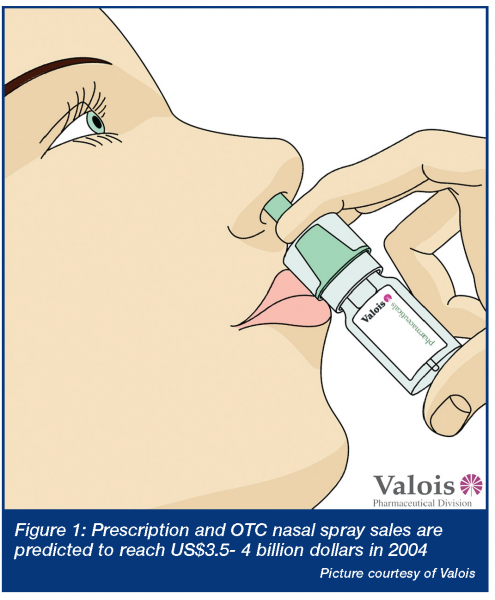 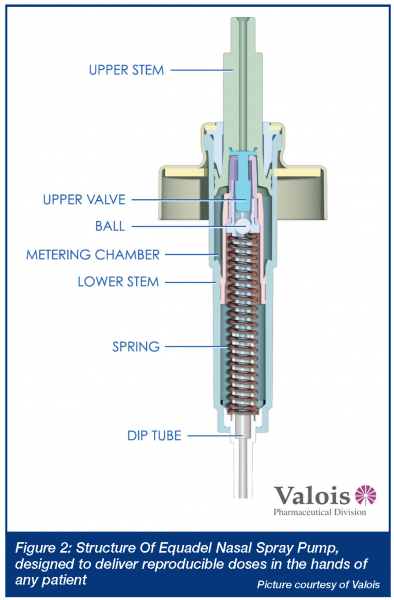 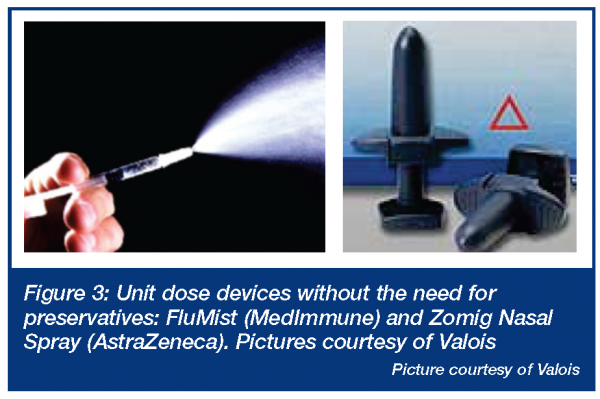 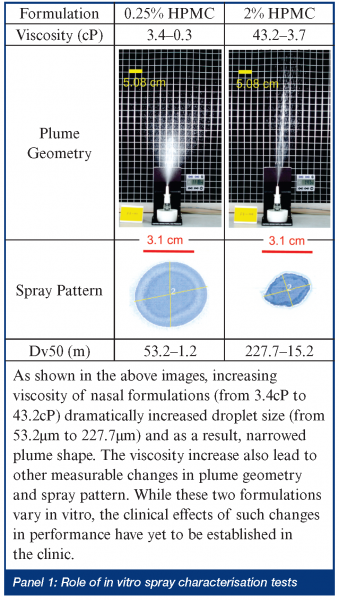 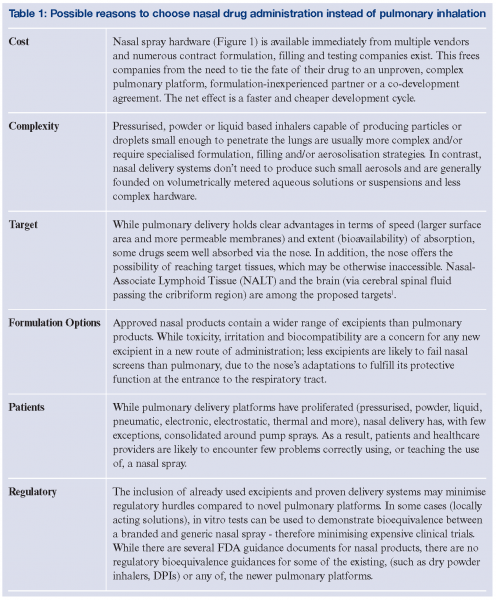