Researchers have developed a new device, called a ‘spiral hydroporator’, which uses the power of a tiny fluid vortex to rapidly and efficiently deliver nanomaterials into cells. 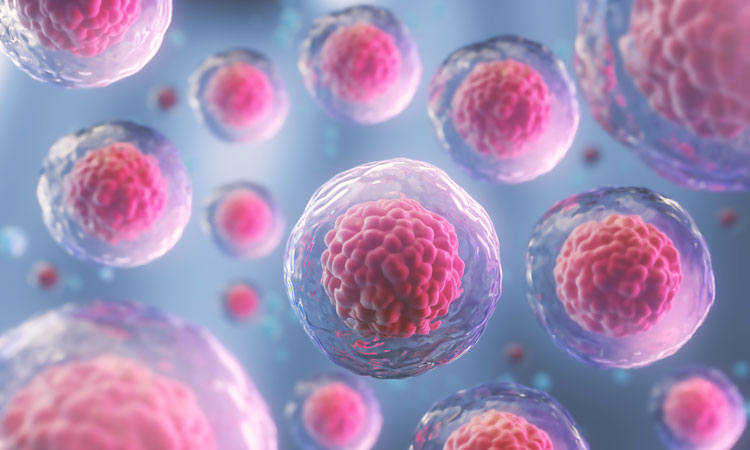 Researchers have developed a rapid and efficient delivery method that uses the power of a tiny fluid vortex to deform cell membranes. The new device – a microfluidic chip called a ‘spiral hydroporator’ – can deliver nanomaterials into around one million cells each minute, with up to 96 percent efficiency.

Moreover, the process is achieved without irreversibly damaging the cells, with up to 94 percent of the cells surviving the process, the developers said.

This research was undertaken by Korea University, in collaboration with the Okinawa Institute of Science and Technology Graduate University (OIST), Japan.

“Our aim was to use microfluidics, where we exploited the behaviour of tiny currents of water, to develop a powerful new solution for intracellular delivery,” said Professor Aram Chung from the School of Biomedical Engineering at Korea University, who led the study. “The chips are really affordable to make and simple to use. You just pump a fluid containing the cells and nanomaterials in two ends and the cells – now containing the nanomaterial – flow out of the other two ends. The entire process takes only one minute.” 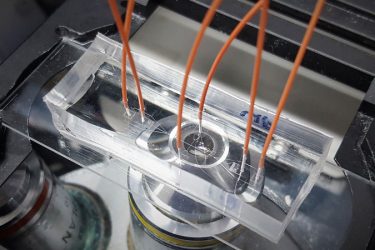 The chip device, called a spiral hydroporator, contains tiny fluid-filled channels. A fluid suspension of cells and target nanomaterials is delivered and removed via the orange tubes [credit: Korea University[.

To create the device, the scientists designed the channels in the microfluidic chip in a specific configuration, with a cross-junction at the centre of the chip and two T-junctions above and below.

When the scientists from Korea University first studied how different channel geometries and flow rates affected the cells, one specific scenario – a cross-junction where moderately flowing streams of fluid collided from opposite directions – stood out as peculiar.

By adding a fluorescent dye into one of the fluid streams, the researchers discovered that a spiral vortex had formed.

“We wanted to fully understand the fluid mechanics causing this effect, and the Micro/Bio/Nanofluids Unit led by Professor Amy Shen at OIST was already working on the problem,” Professor Chung added.

Using the OIST supercomputer, the OIST unit developed and ran simulations of how the opposing fluid streams interacted at the cross-junction, at different rates of flow.

“At a low flow rate, we found that the two impinging streams of fluid parted symmetrically and flowed away from the cross-junction, as documented in the literature,” said OIST scientist, Dr Simon Haward. “However, as we increased the flow rate, we saw instabilities arise which caused multiple vortices to form, eventually merging into one large spiral vortex.”

The formation of the vortex is key to the rapid and effective delivery of nanomaterials into the cells. As each cell passes into the centre of the cross-junction, the force of the spiral vortex deforms the cell, causing tiny nanoholes to arise in the membrane. The nanomaterials in the fluid are then able to move into the cell through these nanoholes. The cells are then swept away from the cross-junction and collide with the walls of the T-junctions, which causes further deformation of the cell membrane and increases the efficiency of delivery. After deformation, the nanoholes in the membrane reseal themselves and the membrane is repaired.

Using spiral hydroporation, the researchers were able to deliver specific nanomaterials into cells, including RNA and gold nanoparticles.

More efficient and low-cost delivery of DNA, RNA and proteins such as CRISPR-Cas9 into large numbers of cells could assist research into topics including gene therapy, cancer immunotherapy and stem cells, Chung said.

Gold nanoparticles can also be used for delivering drugs, imaging molecules and organelles within cells and for diagnosing disease.

“Overall, there are a vast array of applications for spiral hydroporation and interest in the chip has been very high,” said Professor Chung.

The findings were published in ACS Nano.