Imfinzi (durvalumab) has been approved by the European Commission as a first-line treatment for extensive-stage small cell lung cancer, with chemotherapy. 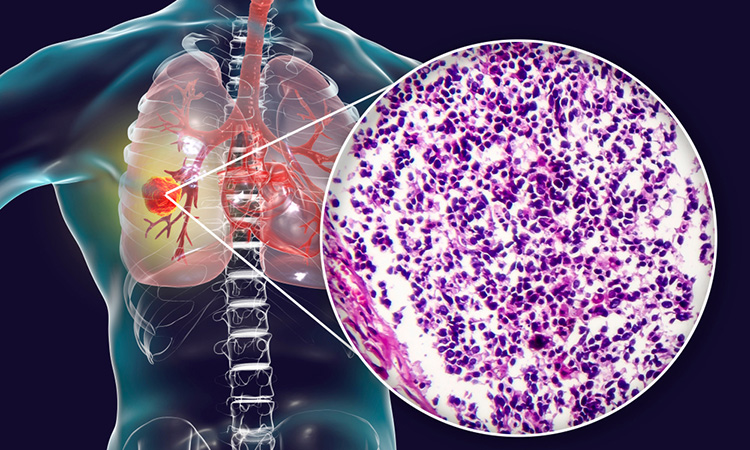 AstraZeneca has announced that Imfinzi (durvalumab) has been approved in the EU as a first-line treatment of adults with extensive-stage small cell lung cancer (ES-SCLC) in combination with a choice of chemotherapies, etoposide plus either carboplatin or cisplatin.

The approval by the European Commission (EC) was based on positive results from a randomised, open-label, multi-centre, global Phase III clinical trial. The study showed Imfinzi plus chemotherapy demonstrated a statistically significant and clinically meaningful overall survival benefit for the first-line treatment of patients with ES-SCLC. The trial used a fixed dose of Imfinzi - 1,500mg – administered every three weeks for four cycles while in combination with chemotherapy and then every four weeks until disease progression.

Imfinzi is a human monoclonal antibody (mAb) that binds to PD-L1 and blocks the interaction of PD-L1 with PD-1 and CD80, countering the tumour’s immune-evading tactics and releasing the inhibition of immune responses.

The approval follows the recommendation for approval by the European Medicines Agency (EMA) Committee for Medicinal Products for Human Use (CHMP) in July 2020.

Dr Luis Paz-Ares, principal investigator in the Phase III CASPIAN trial said: “For the first time, patients with ES-SCLC in Europe will have the option of an immunotherapy combination with cisplatin, a preferred chemotherapy for many European physicians in this setting. Today’s approval of Imfinzi provides physicians with an important new first-line treatment option that provides significant overall survival benefit with a well-tolerated treatment.”

Dave Fredrickson, Executive Vice President of the Oncology Business Unit at AstraZeneca, said: “Imfinzi plus chemotherapy is becoming a new global standard of care for patients with ES-SCLC and we are pleased to bring this option to patients in Europe who urgently need it. This is the first immunotherapy regimen to offer both a sustained survival benefit and an improved response rate, as well as a choice of chemotherapies and convenient dosing every four weeks during maintenance.”

Imfinzi in combination with etoposide and either carboplatin or cisplatin is also approved in the US, Japan and several other countries for the treatment of ES-SCLC in the first-line setting and is currently under regulatory review in other countries.