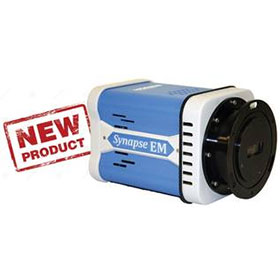 HORIBA Scientific, global leader in Optical Spectroscopy systems, launched its new Synapse EM, a deep cooled EMCCD Scientific camera for low light and ultra-fast spectroscopy experiments. The Synapse EM is available in front and back illuminated for optimal quantum efficiency. With a sensor format of 1600 x 200 or 1600 x 400 and a pixel size of 16 microns, the Synapse EM is the ideal candidate for high spectral resolution measurements. The camera comes with a standard dual readout mode that allows the users to switch automatically between EMCCD mode for low light measurements and conventional CCD mode for standard spectroscopy.

The Synapse EM comes with several sensor options including the QExtra technology. QExtra technology is available standard in the Synapse EM-BIQX and is an anti-reflective multi-layer coating designed to greatly improve quantum efficiency of back illuminated sensors over a broad spectral range, while suppressing undesirable etaloning effects.

“With a maximum frame rate above 1,600 spectra per second and outstanding linearity, the Synapse EM is the ideal EMCCD scientific camera for Raman, SERS/TERS, multi-track, transient and single molecule spectroscopic applications,” said Eric Teboul, Deputy General Manager and Vice President of HORIBA Scientific.  “The addition of this new EMCCD camera complements our other lines of deep cooled, high performing spectroscopic scientific cameras, such as the Syncerity and Symphony II cameras.”

HORIBA Scientific, part of HORIBA Instruments, Inc., headquartered in the United States, provides an extensive array of instruments and solutions for applications across a broad range of scientific R&D and QC measurements. HORIBA Scientific is a world leader in OEM Spectroscopy, elemental analysis, fluorescence (including the PTI brand), forensics, GDS, ICP, particle characterization, Raman, spectroscopic ellipsometry, sulphur-in-oil, water quality and XRF. Our instruments are found in universities and industries around the world. Proven quality and trusted performance have established widespread confidence in the HORIBA Brand.

The HORIBA Group of worldwide companies, part of HORIBA, Ltd. headquartered in Kyoto, Japan, provides an extensive array of instruments and systems for applications ranging from automotive R&D, process and environmental monitoring, in-vitro medical diagnostics, semiconductor manufacturing and metrology, to a broad range of scientific R&D and QC measurements.