Janssen-Cilag International NV have reported that their therapy IMBRUVICA® (ibrutinib) has received a ‘Positive Opinion’ from the CHMP recommending that its use be extended for CLL patients.

Janssen-Cilag International NV have reported that their therapy IMBRUVICA® (ibrutinib) has received a ‘Positive Opinion’ from the CHMP recommending that its use be extended for CLL patients.

IMBRUVICA® is currently approved for the treatment of adult patients with relapsed or refractory mantle cell lymphoma (MCL) and adult patients with chronic lymphocytic leukaemia (CLL) who have received at least one prior therapy, as well as other circumstances for patients demonstrating unsuitability for chemo-immunotherapy.

Following consideration of the Committee for Medicinal Products for Human Use (CHMP) of the European Medicines Agency (EMA), however, the recommended application could see ibrutinib being used as a single agent for the treatment of adult patients with previously untreated chronic lymphocytic leukaemia (CLL).

CLL is generally a slow-growing blood cancer of the white blood cells called B-lymphocytes; the median age of diagnosis being 72 years and incidence rates among men and women in Europe being approximately 5.87 and 4.01 cases per 100,000 persons per year, respectively. The chronic disease often sees patients being faced with ever decreasing treatment options, so this wider first time, single agent application could provide new hope for patients. 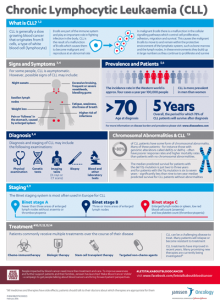 The ‘Positive Opinion’ of the CHMP was based on the results of a clinical trial published in The New England Journal of Medicine (NEJM) – Phase 3, randomised, open-label RESONATE™-2 (PCYC-1115) – which showed ibrutinib provided significant improvement in all efficacy endpoints versus chemotherapy comparator Chlorambucil in newly diagnosed CLL patients aged 65 and over.

“Janssen is proud to be leading the charge with our ongoing efforts to transform the treatment experience for patients with difficult to treat blood cancers, such as CLL,” said Jane Griffiths, Company Group Chairman, Janssen Europe, Middle East and Africa. “Ibrutinib continues to demonstrate impressive clinical results, and the data on which this recommendation is based once again highlights its potential to deliver improved patient outcomes for suitable patients.”

This regulatory milestone follows the decision by the U.S. Food and Drug Administration in March 2016, to approve the expanded use of ibrutinib capsules for treatment-naïve patients with CLL.