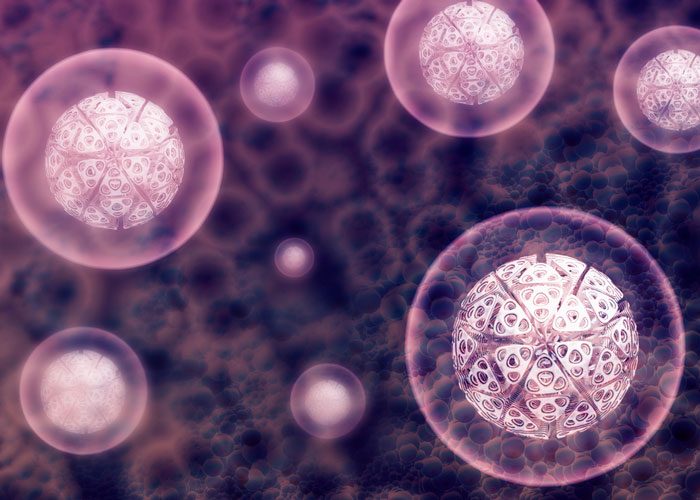 A new drug delivery system that uses a synthetic-biological hybrid nanocapsule could provide a smart technology for the targeted treatment of a variety of serious diseases at the genetic level.

The hybrid offers a way to correct diseased cells at the genetic level – while at the same time leaving healthy cells alone – to increase the effectiveness of treatments and reduce unwanted side effects.

“There’s no one-size-fits-all delivery system,” says Jessica Rouge, Assistant Professor of chemistry at the University of Connecticut (UConn), “The beauty of this system is that it is programmable, modular, and has the ability to rapidly integrate diverse peptide sequences. It can be tailored to combat new disease challenges as they emerge.”

The delivery platform combines synthetic peptides, surfactants, and nucleic acids to form a nanocapsule that allows time-appropriate, enzyme-specific co-release of a given pharmaceutical and an oligonucleotide (DNA or RNA).

These findings build on Prof Rouge’s work to understand how enzymes and nucleic acids can be used in new ways to engineer highly specific and targeted responses in chemical and biological systems.

As part of this aim, Prof Rouge has developed a unique linker technology to connect a synthetic drug delivery vehicle referred to as a nucleic acid nanocapsule (NAN) with a new peptide cross-linker approach. The NAN enables both a small molecule drug and a nucleic acid – RNA or DNA – to be delivered to a cell. This combination generates a nanocapsule capable of shepherding genetic or pharmaceutical molecules to a target on or within a cell.

Once guided to their target, the encapsulated materials are subsequently liberated nearby or within the diseased cells, depending on its biochemical environment. In Prof Rouge’s method, this release doesn’t occur unless the peptide cross-linker is triggered by specific enzymes that cause the nanocapsule to deteriorate and eventually biodegrade.

While Prof Rouge feels her method has clear promise to reduce the negative side effects associated with chemotherapy for cancer patients, she is confident the technology could be applied to a number of other genetic and acquired diseases.

Once synthesized using Prof Rouge’s system, the cathepsin B and MMP9 targeted nanocapsules, also called pep-NANs, successfully released their cargo when treated with their intended enzyme targets and under biologically relevant conditions. They showed no signs of biodegradation when treated with non-target enzymes, a key to proving that only the right enzymatic ‘key’ can unlock the drug they carry. 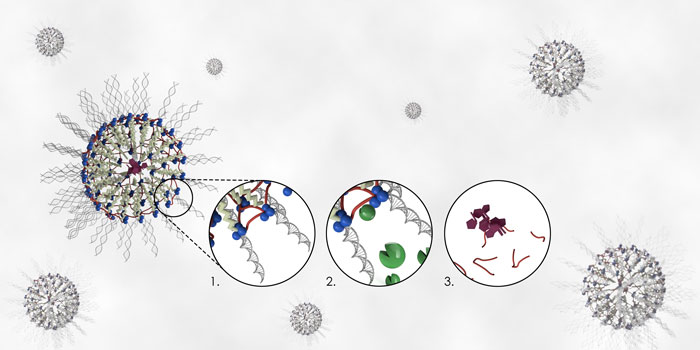 CREDIT(Artwork by Joseph Luciani/UConn): Enzyme-triggered degradation of a drug-loaded peptide-crosslinked nucleic acid nanocapsule. First a peptide is crosslinked at the nanoparticle surface (1), then an enzyme recognizes the peptide crosslinker (2), and finally, the enzyme cleavage leads to the release of the drug and any intact DNA (3).

Rouge and her team also tested whether or not drug release would be triggered when the pep-NANs came into contact with similar enzymes at various pH levels. They found that the pep-NANs remained intact unless pH levels specific to the target enzymes were present, indicating that the pH of the cellular environment can regulate the enzyme-specific cargo release.

Nanocapsules synthesized using Prof  Rouge’s method were not unintentionally set off by enzymes similar to their target – a critical difference between the system Rouge developed and conventional pH-sensitive drug delivery approaches.

With standard therapies, delivery is rapid and total, and it is often insensitive to enzyme expression levels. It also increases the risk of over-medication, requires frequent dosing, and doesn’t guarantee that the medication will reach affected cells. With this systemic means of delivery often come widespread adverse effects that can sometimes be worse than the illness being treated – a fact that is particularly true in the case of chemotherapy, which is designed to kill cells but cannot distinguish between those that are healthy and those that are diseased.

Along with cancer applications, Prof Rouge says she is focused on tailoring her lab’s materials for other challenging diseases and disorders that don’t currently have effective treatment options but which could benefit from her approach. She is currently collaborating with researchers at UConn Health in Farmington and UConn’s main campus in Storrs on several interdisciplinary projects that seek a better balance between short-term and long-term therapies, including treatment of optical neuropathies and asthma.