Formulate live biotherapeutic products to enhance their effects
[PODCAST] Collaboration in ATMP development with bioMérieux
How the global chromatography systems market will evolve post-COVID-19
Hear from industry leaders in our upcoming live webinars – reserve your place today!
Free membership: sign up today to access all of our exclusive content
Download your complimentary copy of our latest digital journal
Whitepapers/App Notes/Posters 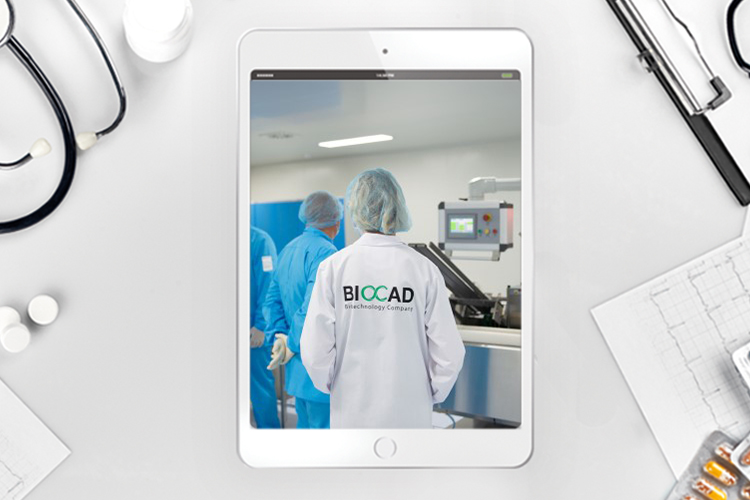 In 20 years BIOCAD grew from a pharma startup outside of Moscow to an international company producing both biosimilars and original products.

As in 2021 BIOCAD has more than 200 marketing authorizations in 30 countries and develops new products using its own platform, it is hard to believe that at the beginning of the 21st century the company did not exist at all. It grew along with the technologies that now form a core of the modern pharmaceutical industry and drove forward the biotech market in Russia. Founded by Dmitry Morozov 20 years ago, BIOCAD walked a long path from an idea to finding investment, building a business plan, setting up innovative production, and controlling compliance with international guidelines (with regulations in the pharmaceutical industry being rigid, even if the company only operates locally, it has to face competition with major international players). From the start, it was decided that BIOCAD would not follow Soviet schemes, and all the necessary standards had to be implemented right away: all seven production and R&D sites are GMP, GLP, and GCP-certified.

Biosimilar production is not an easy business. One has to respect the requirements and strictly control the correspondence of the product to its original, while selling it for a considerably lower price. Nevertheless, the result is very inspiring, because it is about making crucial drugs accessible to more patients.

BIOCAD’s first major breakthrough was the production of pharma markets’ three main biosimilars, monoclonal antibodies against several widespread types of cancer. Those were rituximab, bevacizumab, and trastuzumab. Currently, the three of them are being exported to over 20 countries around the world, which led to BIOCAD being ranked 16th (and it is the only Russian company in the list) among the world’s top biosimilar producers by value according to the prestigious Torreya ranking, in November 2021.

The success of these biosimilars was never meant to be a final goal. The biggest dream to fulfill was to bring the real innovation to biotech, with a full pipeline of innovative drugs for the treatment of cancer, autoimmune and neurologic diseases.

“At that time, we came to the conclusion that all the antibodies we develop must be as human-like as possible. To do this, we did a massive job of assembling MeganLiB, a naive combinatorial phage library. It was created based on genes of variable domains of antibodies from more than a thousand healthy donors. It includes about 10*11 independent clones, which makes it one of the largest libraries in the world of its kind,” says Pavel Yakovlev, Vice President of BIOCAD R&D Department.

MeganLiB laid the foundation for MabNext, BIOCAD’s proprietary platform that is used to develop a number of drugs based on monoclonal antibodies. It is a powerful tool, as researchers can find there an antibody for any target they become interested in. MeganLiB and MabNext led BIOCAD to national innovation leadership, as it was the first biotech company in Russia with such R&D capacities.

Netakimab is a pioneer member of BIOCAD’s original drugs range, because it was the first one developed on the MabNext platform. Netakimab targets psoriasis, radiographic axial spondyloarthritis, and moderate-to-severe plaque psoriasis. It is an antibody based on llama immunoglobulin which is the closest to human immunoglobulins. Netakimab inhibits IL-17A at therapeutic concentrations: three clinical trials (ASTERA, PATERA, PLANETA) confirmed high efficiency, low immunogenicity, and favorable safety profile of netakimab in the treatment of radiographic axial spondyloarthritis, psoriatic arthritis and plaque psoriasis.

Netakimab is of particular importance for BIOCAD as it is the first drug in the MabNext line. It became a pilot project to develop and optimize the complex methodology of the platform: biochemical, cellular, genetic engineering, and microbiological.

Pavel Yakovlev states, “The project was significantly different from all previous projects in terms of testing antibody activity. The Cell Engineering Division team had to develop fundamentally new functional cell tests for this project. Based on test results, some of the most promising molecules were selected, and eventually, the IgG1 antibody with a modified Fc region became the final candidate.”

Prolgolimab was first approved in Russia in 2020 for treatment of unresectable or metastatic melanoma. The approval was based on data from the MIRACULUM study, in which prolgolimab demonstrated significant antitumour activity and a manageable safety profile in patients with advanced melanoma. Then, for the first time at BIOCAD, domestic approval of an original drug was followed by international clinical trials for advanced cervical cancer and non-small-cell lung cancer therapies in China. Both NSCLC and advanced cervical cancer studies will involve more than 150 patients from China. More than $20 million will be invested in both studies in China. The total joint venture financial investment in international multicenter clinical trials (IMCTs) of the drug may exceed $35 million.

Another original BIOCAD drug that was developed next was levilimab, an original monoclonal antibody that binds to the alpha subunit of the IL-6 receptor (IL-6R) and blocks the transmission of IL-6 signal into cells. It was originally developed for the treatment of rheumatoid arthritis. For levilimab development, BIOCAD designed a novel model of collagen-induced arthritis in cynomolgus monkeys (previously, only common marmoset species were used in preclinical trials as preclinical disease models).

Rheumatoid arthritis was not meant to be the only indication for levilimab. As the COVID-19 pandemic emerged in early 2020, the cytokine storm was identified as one of the major clinical challenges associated with the infection, as it poses a high risk of fatal outcomes for patients despite their immune system eliminating the virus. BIOCAD researchers realized the therapeutic potential of levilimab in the cytokine storm when the international scientific community manifested a growing amount of evidence of anti-IL6R therapy efficacy in COVID-19 patients. Due to the urgent need for life-saving therapy, the CORONA clinical trial—from developing study design to patient recruitment, obtaining results and data analysis—was conducted in unprecedented time. As a result, levilimab was granted a conditional marketing authorization in Russia by rapid approval process and has been used in clinical practice since summer 2020. The CORONA study confirmed the efficacy of the therapy, contributed to the data about the effects of IL6R inhibition, and demonstrated how its use can help the national healthcare system operate in an optimal way during the pandemic. The real-world data showed the efficacy and the favorable benefit/risk profile of the drug in moderate and severely ill COVID-19 patients. Timely administration of levilimab results in more favorable disease outcomes, earlier oxygen withdrawal, and an increase in sustained clinical recovery rate. Levilimab was granted standard marketing authorization in late 2020. And in mid-2021, levilimab was approved for the treatment of rheumatoid arthritis due to the study results of the SOLAR phase 3 clinical trial.

Being a national market leader brings the responsibility to contribute internationally through improving and clarifying the drug regulations guidelines. A presentation by Pavel Yakovlev (Head of the Computational Biology Department at that time) at the 64th INN Stakeholder meeting of the WHO in Geneva in May 2017 played a final role in the revision of the monoclonal antibody nomenclature scheme of the Programme on International Nonproprietary Names (INN), which was the main topic of an open letter prepared by pharmaceutical companies. According to this scheme, a special infix (source infix) was used to indicate the species on which the mAb was based. WHO experts agreed to drop the source infix as it does not convey information on immunogenicity and there is a need for more flexibility in creating mAb INNs. They also agreed with BIOCAD’s suggestion that T cell epitopes should play a more important role in assessing immunogenicity. As a result, BIOCAD’s anti-IL-17 mAb (netakimab) became one of the first monoclonal antibodies in the world that was assigned its name under the new nomenclature scheme.

Today, in 2021, BIOCAD is still relatively new to the international market. Trying to diversify the pipeline, the company develops a set of products that can find their place among competitors – currently, BIOCAD has over 40 products at various stages of development. R&D remains a flagship and a solid foundation of the business: in addition to MabNext, BIOCAD is running ChemNext, a platform for the preparation of chemically synthesized drugs based on small molecules, and GeneNext, a platform intended for the creation of gene therapy drugs based on adeno-associated rAAV viruses. One of the products of GeneNext platform origin is of particular importance for BIOCAD, as its indication lies in treating and curing spinal muscular atrophy. The molecule is under development right now.

“Our goal is to expand the patients’ access to our unique product portfolio that can improve the patients’ quality of life and reduce the financial burden among payers worldwide,” says Ahmed Salah, Vice President, International Markets, BIOCAD. “We already deliver our products to Latin America, North Africa, and Southeast Asia. And in 5 years we hope to reach every country of these regions – bringing to life the results of most advanced scientific research so that people can live longer and healthier lives.”