There has been renewed interest in finding ways to improve the crystallisation process, highlighted by the initiatives in the many structural genomics consortiums and the increasing number of pharmaceutical and biotech companies carrying out structural research.

Major efforts have been directed towards improving ways to screen for crystallisation conditions and new technologies in miniaturisation and automation of the crystallisation experiments have now made it possible to set up thousands of crystallisation trials in a single experiment2,3. Despite the large number of proteins and diverse screening conditions that have been tested, the success rate is rather lower than anticipated4. Although robotics and nanotechnology have streamlined many of the processes in protein crystallography – and particularly in crystallisation – there may be drawbacks associated with completely automated systems. In the past, people who were successful in growing protein crystals were considered to have ‘green thumbs’ and the process was often considered to have more to do with ‘black magic’ than science. The introduction of many different commercial screens, a plethora of crystallisation plates and sophisticated liquid handling systems have eliminated many of the ‘hands on’ or intuitive strategies. We have possibly made an erroneous assumption that high throughput equated to a high output (i.e. more crystals). Perhaps not enough attention has been paid to some of the parameters that have been changed or ignored in opting for automation. A critical issue in the crystallisation process that has been greatly overlooked is nucleation; without nucleation there can, by definition, be no crystallisation.

We have seen many examples of proteins with a high degree of purity that are soluble to concentrations > 90mg/ml but produce very few hits in crystallisation screens5. It is not unusual to observe up to 50 per cent of drops in a typical commercial screen that remain clear throughout the crystallisation experiment. In situations where nucleation does not occur spontaneously in a crystallisation experiment the introduction of seeds can be used to favour higher local concentrations of macromolecules so that the energy barrier for nucleation is lowered. Seeding is one of the most efficient methods for controlling and improving crystal growth as the seeds are introduced in the metastable zone where growth, rather than continued nucleation, is favoured. We have often seen evidence of this type of induced nucleation when some foreign body falls into the crystallisation drop (Figure 2) – these are generally in the form of hairs or fibres. For many years it was an urban myth in protein crystallisation labs that people with beards were more successful than those without. In 1970 David Banner captured this phenomenon, possibly for the first time, with a photograph of chicken triose phosphate isomerase (the first TIM barrel) crystals nucleating on a fibre (Figure 1).

Many authors have demonstrated the possibility of using various types of heterogeneous seeding material or surfaces to facilitate nucleation6,7,8,9,10. In another field of crystallisation a major breakthrough was achieved in 1954 when a Japanese researcher, Ukichiro Nakaya, grew the first artificial snow crystals in the laboratory under controlled conditions. His success was apparently due to rabbit hairs falling from his parka hood into the preparation.

Having followed this phenomenon of serendipitous nucleation for a number of years in 2003 we published a study using horse hair to influence the crystallisation11 of a number of different proteins. In the first (very crude) experiments a single piece of horse hair was introduced into the crystallisation drop with quite dramatic effect (Figure 3). We could subsequently establish a correlation between the concentration of the homogenised hair seeds and the number of crystals that grew proving that the hair seeds were the cause of the crystals’ growth (Figures 4 and 5).

Unfortunately none of the systems described in the literature has proved suitable to be generally applied, either successfully or in an automated manner. These studies have, however, shown that we need to find better ways to influence and control the nucleation event, preferably during the initial screening process, as in many crystallisation experiments sufficiently high levels of saturation are not reached and the critical nucleation event cannot occur. If seeds are introduced into a crystallisation drop the level of saturation required for nucleation and subsequent crystal growth is much lower. Seeding has become an established method of optimisation but is not yet routine during the screening process. An excellent review of seeding methods “Seeds to Crystals” and a comprehensive list of references has been published by Bergfors12.

An important observation was made by Ireton and Stoddard when they published a report describing a “microseed matrix screening” method13, which uses a form of cross seeding to improve crystal quality. This method was applied where poorly diffracting crystals were used to seed into similar but non identical conditions resulting in a much improved crystal form, allowing the X-ray structure to be resolved. The authors observed that even when the “optimised” conditions had been defined, no crystals could be grown unless seeds were added.

This method attracted our attention as we believed that it would be relatively easy to automate and allow a study which might demonstrate its general applicability to screening.

The automated method consists of first making a seed stock from any crystalline material that can be obtained with the target protein, even if the crystals are poorly formed or twinned. The stock is made using a seed bead method (Hampton Research) originally described by Luft et al14. Briefly, crystals are placed in a volume of 50µL reservoir solution in an Eppendorf tube with a Teflon ball and mechanically homogenised on a standard lab vortex for three minutes. The resulting seed stocks can be diluted in the same buffer and frozen at – 80°C. New screens are then run with drops containing 0.1 µL seed stocks, 0.2µL of screening solution and 0.3µL of protein. The solutions are dispensed simultaneously.

The Oryx-8 system from Douglas Instruments has the possibility to dispense up to five different solutions at the same time, which has facilitated the experimental set up to automate the microseed matrix screening. For seeding experiments a three bore tube is used; the required amount of protein is aspirated into the first bore (30ul) and seed stocks into the second bore. The third bore is used to aspirate and dispense each of the 96 reservoir solutions with the seeds and protein. A major advantage of this method is that the seed stocks could be stored as aliquots at -80°C and, even after a number of cycles of freezing and thawing, retained their capacity to induce nucleation.

To test the effect of adding seeds, a new crystallisation screen plate is prepared (‘Index’ from Hampton Research or Nextal Peg suite from Qiagen) And, using an Oryx-8 robot (Figure 6) as described above, drops are dispensed into the wells of a standard 96 well plate (Intelliplate). In control experiments 0.3µl of screening solution is added to 0.3µl of protein without the addition of seeds. In general, the most concentrated seeding stock was used to give the highest possibility of promoting nucleation.

Using matrix microseeding with three different types of proteins has shown not only that the number of hits in standard screens can be significantly increased, but also in a number of cases a clear improvement in crystal quality was observed. Interestingly, crystals could be obtained in completely different conditions from those where the original crystals grew. The increase in the number of hits more than doubled in all cases (Figure 7).

The matrix microseeding method is a simple and efficient way to increase the number of hits in crystallisation screens and promises to have an important impact on the way in which crystallisation screening procedures are performed. Using this technique in an iterative manner can help to improve the quality of crystals, using slight improvements in the crystals to generate new crystal stocks and re-seeding into different screen types. The increased hit rates will also allow a better choice of starting conditions for optimisation experiments.

Many experiments are still required in order to fully understand the phenomenon and to provide more information for design of standard protocols for screening improving crystal quality. 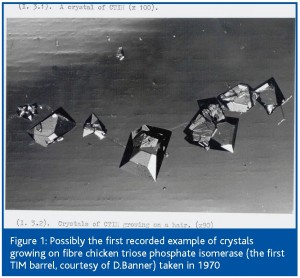 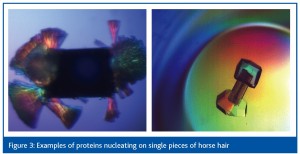 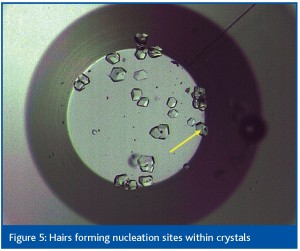 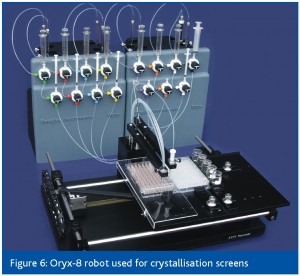