The utilisation of sub-therapeutic doses as a means to test basic properties of a new drug in man without having to execute exhaustive animal studies, forms the basis for the term ‘microdosing’. The technique was identified early-on as a promising tool within the European Federation of Pharmaceutical Sciences (EUFEPS) programs; “Optimising the science of drug development” and “New Safe Medicines Faster”1. The realisation of this concept was, however, practically impossible due to the regulatory requirements. To be able to push microdosing forward, Quintiles and Uppsala University PET Centre initiated discussions with the Swedish Medical Products Agency (MPA) in late 1998, based on the utilisation of Positron Emission Tomography (PET) as an ‘analytical’ tool. Following approximately one and a half years of discussion, the Swedish MPA formed a regulatory strategy for microdosing, including a minimal pre-clinical safety package that should precede studies in man. It should be emphasised that the MPA encouraged the development from the beginning and gave pivotal support to the concept. This enabled the first microdosing trials to be run by Quintiles in Sweden. From the pharma industry side, GSK was a pivotal supporter to the development of microdosing. Almost in parallel with the Swedish experience, microdosing was promoted in the UK by Professor Colin Garner and his group in York, based on the use of Accelerated Mass Spectrometry (AMS). Thus, the scientific development of the concept was really put on the European map.

Microdosing is defined as a dose less then 1/100th of the dose calculated to yield a pharmacological effect of the drug based on primary pharmacodynamic data obtained in vitro and in vivo and at a maximum (cumulative) dose of <100 µg.

Microdosing utilises high specificity labelling and PET2 or AMS3 as tools for estimating distribution/binding to receptor/targets (PET) and systemic (AMS) as well as regional (PET) pharmacokinetics. A candidate drug is labelled with a radionuclide tracer (usually 11C for PET and 14C for AMS) and the actual (intravenous) dose administered is very low (< 20 microgram). Due to the low dose administered (non-pharmacological), the preclinical requirements will be significantly less cumbersome (see below). As a validation of the human microdose data, PET data from primates using higher (clinical) doses should be collected. The site of labelling is crucial since the PET signal could arise from potential metabolites. The short tracer half-lives are another limiting factor for PET. Combining PET data with analysis using AMS technology is advised. Thus PET and AMS are not ‘rival’ technologies since they actually address different questions. PET focuses on target access and other distribution characteristics (regional PK) whereas AMS focuses on systemic PK properties.

For both technologies, the low dose may not be fully representative for clinical doses due to potential saturation of enzyme and/or transporter systems at clinical doses. The fundamental questions concerning microdosing are thus:

The early experience with both PET and AMS indicated that it is not a crucial problem. Linear PK (systemic as well as regional) has been seen for at least ten drugs using either AMS or PET methods in validation studies or with early development drugs. To address this issue from a strategic scientific point of view, the CREAM trial (Consortium for Resourcing and Evaluating AMS Microdosing) was initiated (http://www.xceleron.co.uk/n24.shtml ). In the trial, five drug compounds were selected with known and different pharmacokinetic characteristics, which are considered representative of the kinds of issues that arise in preclinical development that may make prediction of human pharmacokinetics problematic. Each of the compounds was administered at a microdose level and at a therapeutic dose level to subjects in an appropriate cross-over design. The trial was set up to be a rigorous test using compounds that were expected to strongly challenge the microdosing concept.

Of the five drugs studied, microdose PK data reflected pharmacological dose PK for three and gave important metabolism data for one (1 compound was a no-test). Details of the individual molecules chosen and the reason for their choice are shown in Table 1. The results represent a surprise for some in the pharmaceutical community as the concept works in circumstances that were cited as being unlikely for microdosing to succeed. For example, the microdosing study carried out with midazolam gave excellent correlation with the pharmacological dose that was seen as highly significant as this is a well-known substrate for CYP3A4. Many sceptics of the microdosing concept suggested that drugs with high first pass metabolism would not be predictive at microdose.

Whilst this study was not exhaustive, it demonstrated approximately 70 per cent correspondence between microdose and pharmacological dose PK. Given the fact that the compounds were selected due to difficult PK properties, microdosing scientists consider the outcome of the CREAM trial to be a great success. It should be emphasised that candidate selection is an intellectual process combining in vitro, animal and human data. Thus, correlations between the human microdose PK and a clinical dose PK do not have to be 100 per cent, to take a rational CD selection decision.

The CPMP position paper on non-clinical safety studies to support clinical trials with a single microdose (http://www.emea.eu.int/pdfs/human/swp/259902en.pdf) describes the non-clinical data that needs to be submitted for a microdosing trial in Europe.

An extended single-dose toxicity study should be performed and include a control group and a sufficient number of treatment groups to allow estimation of the dose inducing a minimal toxic effect. For compounds with low toxicity, a limit dose approach could be used. Allometric scaling from animal to man using a safety factor of 1000 should be used to set the limit dose. Both genders should be considered. The study period should be 14 days and include an interim sacrifice on day 2. The study should be designed to obtain information on haematology and clinical chemistry at a minimum of two time points (day 2 and day 14) and histopathology. In addition, all available background information on the test substance and/or close pharmaceuticals, as well as on the therapeutic class, with respect to vital organ function and other safety parameters should be supplied. Examples are receptor screening profiles, activity at HERG, effect on action potentials etc. In vitro genotoxicity studies should be performed as recommended in relevant ICH guidance.

Some critical aspects have been forwarded by the scientific community to the EMEA as regards to the CPMP Position Paper. It is questioned whether the genotoxicity testing is relevant since the exposure in man to a microdose is approximately 25,000,000 times lower than that utilised in the test. The requirement for full GMP has also been questioned.

Only a few case examples of microdosing trials for candidate selection have been published (data available still proprietary information). The experience is, however, very positive so far. Candidates showing either lack of target access or poor PK properties have been screened out, thereby reducing the need for animal studies, extensive testing in humans and, of course, saving substantial time and money. Figure 1 shows examples of PET microdosing trials for three CNS compounds3. In the upper two rows, an NK1-antagonist candidate is tested (PET scan time sequence) both at a microdose (top row) and at a clinical dose (2nd top row) showing excellent access to the target (NK-1 receptors) and illustrating that the microdose predicted the clinical dose. The next lower row shows a candidate drug for the treatment of stroke. Data show that this drug has no access to the target. In fact, it does not penetrate the BB-barrier at all. The PET signal shows the contribution of the vascular area in the brain. These results were surprising since pre-clinical testing indicated that this drug would penetrate the BB-barrier and would otherwise be a good candidate in man.

Future of microdosing in Europe

Microdosing trials as a practical means to improve candidate drug selection are at present exclusive to Europe. It is not possible to perform microdosing trials in the US due to the present IND regulation. However, the US FDA will shortly introduce the ‘Exploratory IND’. This regulation will allow a company to screen (using, for example, AMS or PET microdosing) up to five compounds in man (Phase 0). The preclinical requirements will be the same as in Europe with the exception of the requirement for genotoxcicity testing. The other important difference is that the FDA will not require GMP.

Human microdosing has come to age as a tool in candidate drug selection. From being at an infant stage in the late 90s, it is now in a late adolescent stage rapidly moving into maturity. As part of imaging strategies in drug development, Quintiles, together with Uppsala University PET Centre (Imanet) have accumulated substantial experience in microdosing4. The information retrieved from microdosing studies include:

As a result, the following potential impacts on drug development can be seen: 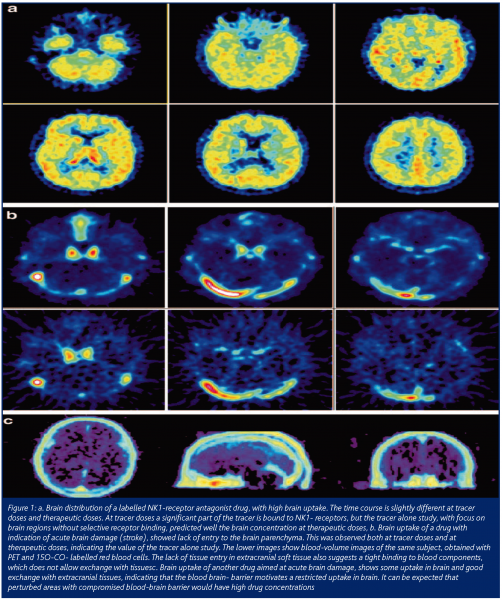 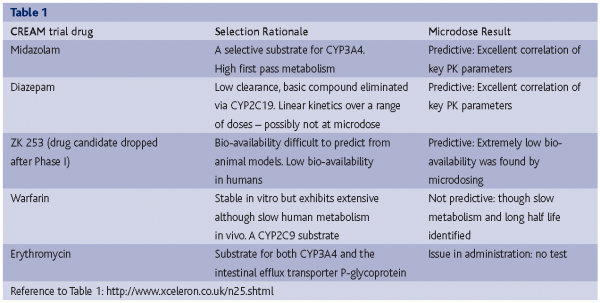