Continuous pharmaceutical manufacturing together with process analytical technology (PAT) provides a suitable platform for automatic feed-forward/feed-back (FF/FB) control of the end product quality as desired by quality by design (QbD)-based efficient manufacturing. The precise control of the quality of the pharmaceutical product requires proactive, corrective actions on the process/raw material variability. Therefore, PAT tools are necessary to monitor the FF as well as FB process variables that need to be sent to the automatic real-time control system. This article highlights the scope of PAT in a combined FF/FB control system of a continuous tablet manufacturing process. 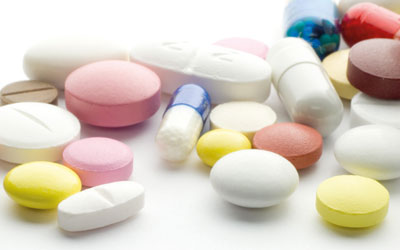 The FF controller takes into account the effect of process disturbances and raw material variability proactively while the FB control system ensures consistency in end product quality. For FF control, the sensor (e.g., near infrared; NIR) should be placed upstream to measure the process disturbances and the measured signal should be transmitted in real time to downstream unit operation to take the compensative actions. Variations in raw material properties (e.g., particle size), feeder hopper level, amount of lubrication and milling and blending action, applied shear in different processing stages, can affect the blend density significantly and thereby also affect tablet weight, dissolution and hardness. Therefore, the inline real-time monitoring of the blend density and its incorporation into the control system so that it does not affect the end product quality is highly desired. For FB control, the sensor should be placed at downstream unit operations to measure the critical quality attributes (CQAs) and critical process parameters (CPPs) and based on that the process parameters need to be manipulated to control the measured variables.

In the past few years, very few attempts have been made to control a tablet manufacturing process by utilising a FB control algorithm along with PAT tools4-5. But when such methods are used, it is important to note that FF control systems need to be coupled with the FB control system for it to work effectively. The coupled FF/FB control system ensures minimum variability in the final product quality irrespective of process and raw material variations and it is very successful in different manufacturing industries. The FF control loop is based on real-time monitoring of the powder bulk density while the FB control loops are based on the drug concentration, powder level, tablet weight and hardness. We propose an NIR-based real-time monitoring of the blend density for FF control.

A continuous direct compaction tablet manufacturing pilot-plant has been installed and situated at C-SOPS, Rutgers University5. The process flowsheet model is shown in Figure 1. To describe the set-up, there are three gravimetric feeders, a co-mill, a continuous blender and a tablet press. The NIR sensor for inline monitoring of powder blend uniformity, powder blend composition and powder blend density has been integrated through a chute placed in between tablet press and blender. The local level controllers are inbuilt in each feeder in order to control the powder flow rate. A ratio controller has been added that provides the flow rate set points of API, Excipient and Lubricant feeders for a given total flow rate and API composition. Six supervisory control loops have been then added.

In order to implement the designed FF/FB control into the pilot-plant, the signal from the NIR sensor (raw spectrums) has to be sent to a chemometric tool that utilises the NIR calibration models for blend density and drug concentration and a real-time prediction tool generates the signals for the control variables in real time. The generated signals are then sent to a commercially-available control platform via an OPC (OLE process control) where the combined FF/FB control loop has been implemented. The blend density is the input for the FF controller while the blend composition together with powder level, tablet weight and hardness are the inputs of the FB control system.

NIR has in the past been used for the real-time monitoring of powder bulk density, drug concentration and blend uniformity, the latter two of which have been previously reported4-6. Here, we describe real-time monitoring of powder bulk density using an NIR sensor. The first step in the process is to calibrate the NIR. In order to develop the NIR calibration model, the spectrums need to be collected for powder samples of different densities. The powder has been filled in a graduated cylinder placed on the top of a tapping machine. Then the taps have been applied on the graduated cylinder.

Tapping changes the bulk density of the powder and thereby the powder volume. Based on the change in the volume, the reference values of the density can be calculated. The highest changes in density are obtained for the first 20 taps. The spectrums have been collected for each density. The PLS-based calibration model for density is developed using a chemometric tool and an NIR sensor is integrated with the direct compaction tablet manufacturing pilot-plant through a chute interface. The calibration models for density and drug concentration are then integrated with a chamometric tool for real-time prediction of density and concentration signals, respectively. Blend uniformity (relative standard deviation) can then be calculated from the drug concentration signals.

A proprietary PAT data management tool (synTQ) is used for the management of raw data and predicted signals. The data across different software tools communicate via OPC interface. In gravimetric mode of the operation of lose-in-weight feeder, the powder flow rate is controlled by manipulating the feeder screw speed. So if there is variation in the powder bulk density then the screw speed needs to be adjusted automatically in order to deliver the same mass flow rate of the powder. Therefore, the feeder screw speed is the primary indication of the change in the powder bulk density.

The real-time monitoring of powder bulk density along with feeder screw speed is shown in Figure 2. As shown in the figure, the screw rotational speed first decreases and then increases indicating that the powder density slightly rises before dropping non-linearly. The figure demonstrates how the change in bulk density affects the feeder screw rotational speed. The density measurement response is delayed in comparison to feeder screw speed response. This result demonstrates the proof of concept that NIR can be used for real-time monitoring of powder bulk density.

Figure 3 shows that powder bulk density has a significant impact on tablet weight. Similar effects have been observed on tablet hardness as well. Therefore, the powder bulk density is critical to monitor for real–time feed-forward control. It can be proposed that the effect of density variation is compensated by adjustment of the fill depth. Meanwhile, Figure 4 shows the sensitivity of fill depth on tablet weight and hardness. The results demonstrate that the fill depth can be manipulated to compensate the variation in density so that a consistent tablet weight and hardness can be achieved.

This review highlights the scope of PAT for FF/FB control to obtain a precise pre-defined end-product quality of a pharmaceutical product, as mandated by regulatory authorities. NIR has been used for real-time monitoring of powder bulk density, drug concentration and blend uniformity. Future work includes the full implementation of an FF/FB control system into our pilot-plant.

This work is supported by the National Science Foundation Engineering Research Center on Structured Organic Particulate Systems, through Grant NSF-ECC 0540855.

Dr. Ravendra Singh is Assistant Research Professor at Department of Chemical and Biochemical Engineering, Rutgers University, USA. He is the recipient of a prestigious EFCE Excellence Award given in Recognition of an Outstanding PhD Thesis, from European Federation of Chemical Engineering. He is a recognised scientist in the field of continuous pharmaceutical manufacturing, PAT and process control, and has published 40 research articles in international journals and magazines, written two book chapters, has given several invited industrial lectures and presented at over 50 international conferences. He is lead guest editor of Journal of Chemistry special issue for PAT.