Ion chromatography (IC) is currently used throughout chemical and pharmaceutical industries for the quantitative determination of inorganic and organic anions and cations in a variety of matrices from both raw materials to finished products. In most cases, suppressed IC is utilised, particularly for the determination of inorganic anions and this represents the current ‘state-of-the-art’ for […]

The rapid growth in interest and application of these new stationary phase materials, particularly in the area of fast (elevated flow rate) HPLC, has been most impressive and a recent dedicated issue of the Journal of Separation Science illustrates this. The main advantage of such porous monolithic phases is the ability to increase mobile phase flow rates whilst maintaining low to moderate column backpressures, due to the relatively high permeability of the material. This advantage, combined with impressive peak efficiencies at moderate to high flow rates, means such phases are ideally suited to the rapid chromatography of simple to moderately complex samples. The above special edition, edited by F. Svec and N. Tanaka, contains no less than four substantial reviews on monolithic stationary phases, covering the preparation of polymer monoliths2; their application to rapid bioseparations3; the application of silica based monoliths4 and their characterisation5. This groundswell of interest is also reflected in the rapid emergence of commercial suppliers of monolithic type columns, which already includes BIA Separations (Ljubljana, Slovenia), Isco (Lincoln, NE, USA) and Merck (Darmstadt, Germany). Figure 1 shows a scanning electron microscope (SEM) image of a section of monolithic silica, together with an ultra-short monolithic silica column – the use of which for rapid separations is described below. Detailed studies into the suitability and application of new monolithic phases within the pharmaceutical industry have also begun to appear in the literature in recent years. These studies include comparative exercises, such as those comparing peak efficiencies of microparticulate and monolithic phases when used at elevated flow rates6, those detailing robustness and method transfer from standard HPLC to fast HPLC using monolithic columns7 and those looking into practical aspects of fast HPLC within pharmaceutical process development and production8,9. However, what is evident from the above body of work is that most studies on monolithic phases to-date have focused upon reversed-phase separations, with very few attempts to apply monolithic materials to fast separations of inorganic anions and cations. The reason for this is the current lack of commercially produced monolithic ion exchangers, although recently a number of research groups, including our own, have begun to address this problem through the production of a range of coated and bonded monolithic type anion and cation exchangers.

Recent interest in fast anion chromatography was initially aroused through the publication of a preliminary study into the use of short (3cm long) 3 mm ODS particle packed columns semi-permanently modified with a strongly absorbed double legged cationic surfactant, didodecyldimethylammonium bromide (DDAB) for anion separations10. In this case, the efficient separation of fluoride, carbonate, phosphate, chloride, bromate, nitrite and sulphate was demonstrated in just over 60s on the short particle packed column (with bromide and nitrate eluting later at 110s and 15s respectively). This work led onto a further study by Hatsis and Lucy who used a similar approach, but with new reversed-phase monolithic silica column, allowing the run times to be further reduced through operation at elevated eluent flow rates. For example, using a semi-permanently DDAB modified 5cm C18 silica monolith, the separation of iodate, chloride, nitrite, bromide, nitrate, phosphate and sulphate was demonstrated in under 30s, using a 6mM o-cyanophenol eluent delivered at 10ml/min and combined with suppressed conductivity detection11. A rather significant observation from the above studies was the fact that impressive peak efficiencies were being maintained when using shorter analytical columns than previously thought possible. To illustrate this, Connolly et al. took a 2.5cm C18 silica monolith, again modified with DDAB and using direct conductivity with a phthalate eluent, separated eight inorganic anions in ~ 90s, with an acceptable flow rate of just 4ml/min12. This separation is shown as Figure 2. Even more impressive has been two recent publications where the analytical monolithic anion exchange column was reduced to only 1.0cm in length. The first of these studies once again used DDAB to impart the anion exchange capacity13, whilst the second and most recent work used the zwitterionic surfactant (dodecyldimethyl-amino)-acetic acid to modify the phase14. In the later work, the combination of an eluent flow and pH gradient (termed double gradient IC) was used to facilitate the rapid and close separation of otherwise diversely retained nitrite, nitrate, iodide and thiocyanate. A disadvantage of much of the above work is the perception that dynamically and semi-permanently coated phases suffer from column bleed and eventually loss of capacity. To address this concern new bonded anion exchangers are being investigated for rapid anion analysis. The most recent development in this area involves the production and characterisation of a new lysine bonded zwitterionic ion exchanger, based upon a 10cm silica monolith. Due to the unusual zwitterionic nature of the bonded phase, the column shows both limited selectivity towards divalent cations and strong anion exchange selectivity. Using the new column and an eluent of 50mM phosphate, pH 3.0, at flow rate of 4.9 ml/min., the complete separation of a mixture of six UV absorbing anions, including typically strongly retained iodide and thiocyanate could be obtained in under 2 min. This separation is shown as Figure 3.

As with anions, the use of modified monolithic materials for the ion exchange separation of inorganic (and to a lesser extent organic) cations is beginning to receive attention. Although, traditionally, the determination of alkali and alkaline earth metal cations may have been predominantly carried out using atomic spectroscopic means, the ability to determine multiple cation concentrations in a matter of seconds make fast cation exchange chromatography an attractive alternative – especially in analysis of biological fluids and physiological solutions having a reasonable concentration of sodium. Once more, as with anion exchange, the simplest way to obtain a monolithic cation exchanger is to coat a reversed-phase monolith with a suitable hydrophobic anion exchanger. For example, Xu et al.15 dynamically modified a 5cm silica monolith with lithium dodecylsulphate (Li-DS) to facilitate the separation of hydronium, lithium, sodium, calcium and magnesium. The eluent used contained 5mM EDTA and 0.1mM Li-DS (pH 4.8) and the method used direct conductivity detection. However, with the above conditions the peak shapes for calcium was rather poor and magnesium was retained for more than 20 minutes. To reduce the excessive retention of these divalent cations, Xu et al. went on to further develop the method – this time using a 2mM ethylenediamine/0.1mM Li-DS eluent (pH 6.0) eluent, which saw the elution of hydronium, magnesium and calcium in under four minutes16. The number of bonded monolithic phases available for cation exchange separations is limited, but again some interesting work in this area is beginning to appear. Firstly however, an approach that avoids the need to modify the bare silica monolith has been shown by Pack and Risley17. Here, operating in what has been termed ‘hydrophilic interaction chromatography mode’, cations are retained through partition into an ‘enriched water layer’ adhered to the polar surface of the silica monolith, when using an organic mobile phase with a significant 5-40% water content. In this study the rapid (< 3 min) separation of alkali counter-cations within a number of pharmaceutical salt forms was shown. The use of a bonded monolithic chelating ion exchanger for the rapid determination of metal cations has recently been shown by Sugrue et al.18,19. In this case iminodiacetic acid was bonded onto the surface of a 10cm bare silica monolith creating a highly selective phase for divalent metal cations. The new column was applied to the determination of trace levels of calcium and magnesium in concentrated KCl and NaCl brine solutions, with overall analysis times of < 2 min. Figure 4 shows the separations of these alkaline earth metals obtained at increasing eluent flow rates.

A limited number of anion exchange bonded polymer monolithic columns and discs have been produced commercially for rapid bio-separations of larger molecules. Due to the difficulty in producing the desired micro-porous structure within polymer monoliths, peak efficiencies for small molecules are generally less than that seen with silica based monolithic columns. Hence only a few studies on small anions have appeared. However, some promising work has been shown with organic acids20 and oglionucleotides21 on short (1.2cm total length) monolithic polymer discs. For example, in the latter case a mixture of fourteen oglionucleotides were separated using an eluent concentration gradient in only 3.5 min. There has also been some impressive work on the micro-scale separation of anionic species using capillary scale polymer based monolithic anion exchange columns, including latex-functionalised monolithic capillary columns22, although the separations shown were not particularly fast. Efforts to develop polymer based monolithic phases for cation exchange have, as with anion exchangers, mostly focussed on the separation of larger bio-molecules. However, just recently Ueki et al.23 have produced a methacrylate-based cation exchange monolithic column for capillary ion chromatography. Although run times shown were not particularly rapid, peak efficiencies for alkali and alkaline earth metal cations were reasonably impressive and the application of the new phase to the direct determination of metal cations in protein containing samples was shown.

From this short review it is clear that the future of monolithic porous media in the field of rapid ion analysis looks very promising. During the coming few years it is clear that new materials will continue to be developed and inevitably instrument and column manufacturers will begin to commercially exploit the benefits to be gained from these new stationary phases. For industry, the savings to be made in analysis time is an obvious advantage, not to mention rapid method development. All that remains is for workers to demonstrate that these new monolithic columns can be as robust and reliable as conventional columns in current standard methods and the switch to rapid IC will begin in earnest. 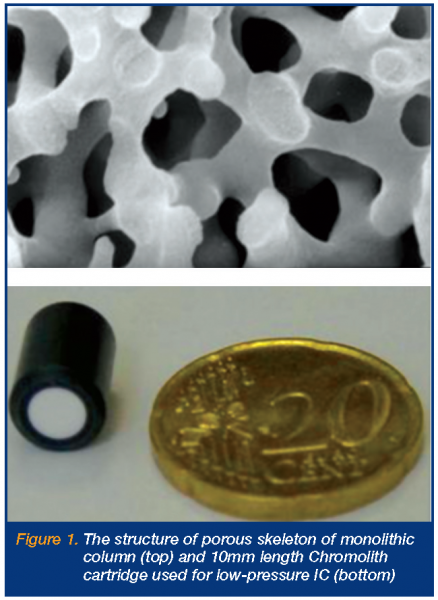 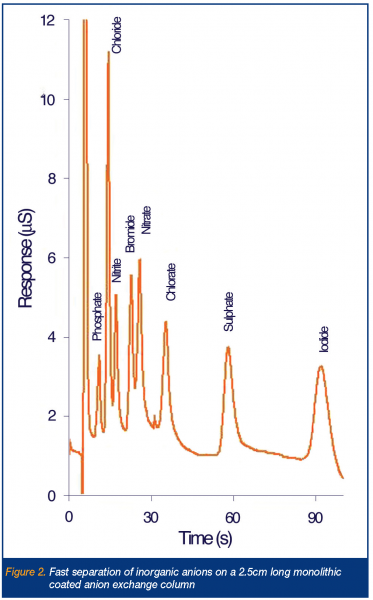 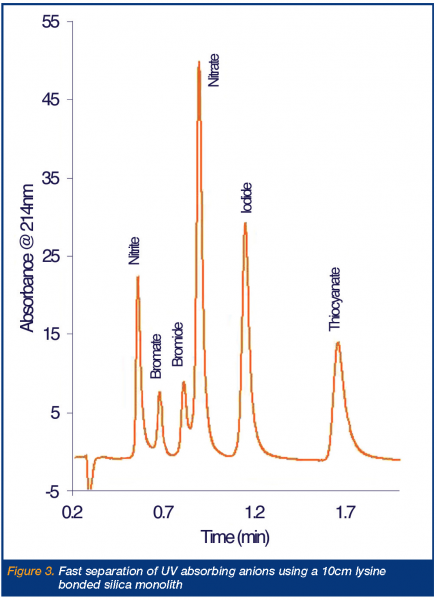 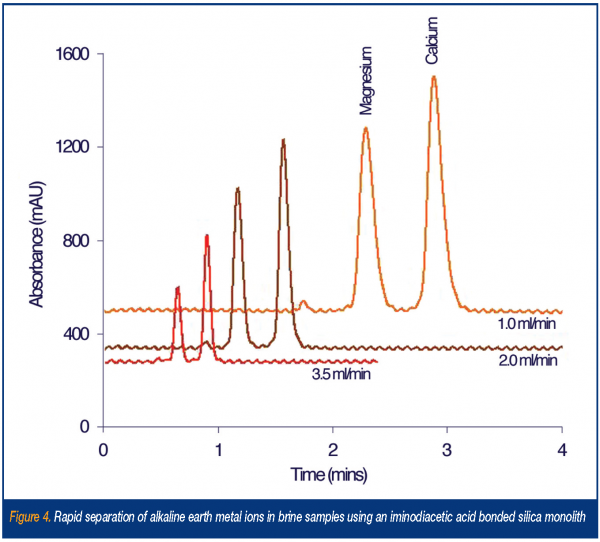