Researchers have created an innovative 3D printing carrier ink to drive the development of personalised biomaterials for cell and drug delivery. 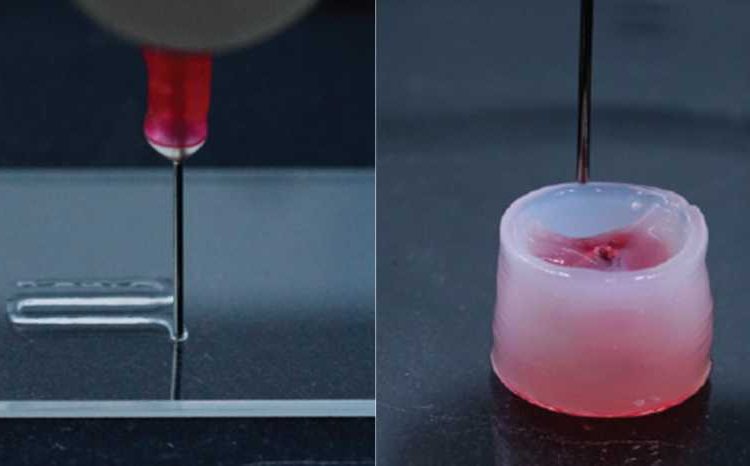 The new carrier ink can be used to produce personalized implants such as heart valves (credit: Guzzi et al. 2020).

Researchers have created a ‘universal carrier ink’ for three-dimensional (3D) printing. The ink could be used in the development of personalised biomaterial implants and novel drug delivery systems, say the scientists.

According to the carrier ink’s developers, Mark Tibbitt and Elia Guzzi, precision biomaterials have been held back in their progress because each time there was a new application, researchers would have to create a new biomaterial – however, this novel universal carrier ink overcomes this.

The team of researchers at the Department of Mechanical and Process Engineering, ETH Zurich, Switzerland, created the ink out of cellulose fibres dissolved in water and biodegradable nanoparticles. The result is a gel which liquifies under the pressure of being pushed through the 3D printer nozzle, but quickly solidifies into shape once printed.

This property is essential to overcome a conundrum called ‘the toothpaste problem’, where a material cannot be too viscous, as it would not pass through the opening of a tube, but also cannot be too liquid as it would then not hold a shape once squeezed out.

The team showed in their experiments that the carrier ink could have different polymers added to it and still perform as before, they tested hyaluronic acid, gelatine, collagen and fibrinogen.

They also studied how live cells behaved within the carrier ink. According to their paper published in Small, the same number of cells survived in the ink as those in a culture outside.