B&W Tek, Inc. is pleased to announce that our newest handheld Raman system, the TacticID-N, has recently received some exceptional praise from a United States federal law enforcement agency…

With the largest library of narcotics, pills, cutting agents and precursors in the industry, the TacticID-N is changing the face of on-scene narcotics identification for our nation’s top law enforcement personnel. 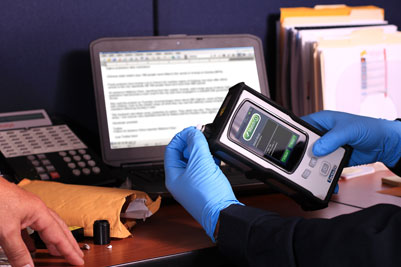 The first case involved an operation producing illegal Percocet pills with the intent of distribution on a large scale. The Percocet 30mg were being cut and mixed with common cutting agents such as acetaminophen and baby powder, re-cut, re-formed and illegally sold as prescription grade name-brand Percocet tablets. The TacticID-N was used to positively identify the pills containing Percocet and exactly which cutting agents were in each pill.

The second case involved a raid of a facility manufacturing Oxymorphone (a US Schedule II prescription pain killer) tablets mixed with over-the-counter Tylenol. The narcotics pills were being cleverly mixed in with actual Tylenol tablets and distributed using Tylenol brand used containers to ship the product out of the area. Only certain containers actually contained the narcotic tablets, while others were all actual acetaminophen as a means to mask the operation.

The TacticID-N was used in over 50 identifications to quickly sort which containers were pure acetaminophen and which contained the Oxymorphone mixed tablets.

Unlike competitive instruments available, the TacticID-N features robust chemometric mixture analysis capable of delivering up to 10 components of a mixed street sample. In both cases, not only was the TacticID-N able to positively identify tablets containing Percocet and Oxymorphone, the instrument was also able to identify all cutting agents present, offering law enforcement personnel insight into the manufacturing processes used by the illegal operations. This type of complex mixture analysis information allows federal agencies to gather manufacturing trends on a regional level, and by extent, the larger north east US drug market.

TacticID-N continues to be an invaluable tool for all levels of law enforcement and is quickly garnering a reputation in the industry as the ‘king of mixture analysis’. We look forward to to continue helping law enforcement agencies globally in the ongoing fight against illegal drug and narcotic manufacturing.