The combined spend on research and development (R&D) for the peer group of 35 mid-cap biotech companies increased by nearly $2 billion to reach a total of $9.7 billion in 2014, primarily thanks to top spenders Regeneron and Vertex, says leading research and consulting firm GlobalData. 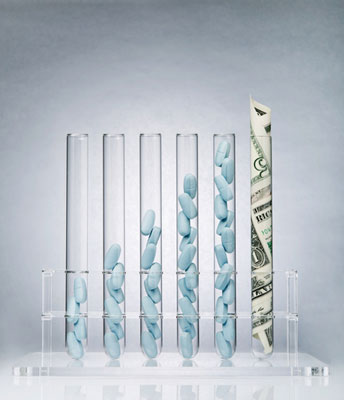 The Company’s report, PharmaLeaders: Mid-Cap Biotechnology Benchmark Report – Sales Forecasts and Product Valuations of Innovative Biotechs, states that Regeneron led the way with R&D expenses of $860 million in 2013, with further analysis showing that Regeneron’s R&D expenses grew by 47.9% year-to-year to $1.3 billion in 2014.

According to Adam Dion, GlobalData’s Senior Industry Analyst, this expenditure was boosted by an increase in clinical trial expenses, due to additional costs for studies of dupilumab, and REGN-1033, the company’s antibody to myostatin (GDF8), which is in Phase II trials for undisclosed musculoskeletal disorders.

Dion comments: “Regeneron’s R&D expenses also grew due to the fees for the regulatory submissions and marketing approvals for Eylea, which GlobalData forecasts to be the top-selling eye drug by 2016.

Vertex had the second largest R&D outlay in 2014

The analyst adds that Vertex had the second largest R&D outlay among the peer group, spending $855.5 million in 2014, representing a 3% decrease from 2013. This resulted from the company completing the TRAFFIC and TRANSPORT clinical trials evaluating VX-809, a combination product of lumacaftor and ivacaftor for treating cystic fibrosis.

Despite this, unexpectedly sharp rises in spending from Jazz and Alnylam helped to drive R&D in 2014.

Dion continues: “Jazz’s 518% spike in R&D spend was the result of a $197 million surge of in-process R&D (IPR&D) expenses, due to the asset purchases of Aerial BioPharma and Sigma-Tau Pharmaceuticals. These purchases gave Jazz the rights to two promising drugs, namely JZP-110 for potentially treating aspects of narcolepsy and sleep apnea, and defibrotide, to prevent severe hepatic veno-occlusive disease in bone marrow transplant patients.

“Meanwhile, Alnylam’s R&D expenses soared by 266% to $411 million in 2014, up from $112.3 million during 2013. This increase in R&D spend resulted primarily from a $221 million IPR&D charge in connection with Alnylam’s acquisition of Sirna Therapeutics’ RNAi assets from Merck,” the analyst concludes.