The investments in the future have paid off for L.B. Bohle Maschinen + Verfahren GmbH in the 2015 business year… 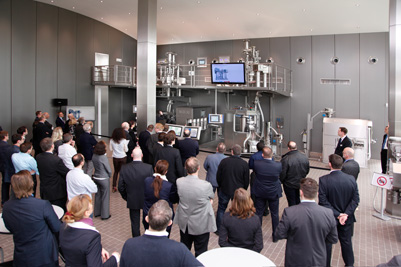 The investments in the future have paid off for L.B. Bohle Maschinen + Verfahren GmbH in the 2015 business year: The special machine builder for the pharmaceutical industry increased its turnover by 26 per- cent to EUR 48 million. CEO Lorenz Bohle lists the success stories: “We have won a prestigious contract from a global leader in the US, despite strong competition. In Russia alone, we generated EUR 6 million. And we have several major projects running in South America and Mexico.” For 2016, he forecasts “a growth rate between ten and 15 percent”.

With the opening of the Technology Center and the symposium on continuous processing, L.B. Bohle has created a first-class platform for the development of innovative processes in March 2015.

Customers, scientists and cooperation partners increasingly draw on the unique system for experimental and testing purposes. According to Lorenz Bohle, “permanent and process-overlapping measurement, monitoring and production control are the key to pushing continuous production.” In cooperation with the experts of the universities RWTH Aachen and HHU Düsseldorf, the foundation for a modular and quality-oriented production platform in line with state-of-the-art pharmaceutical technology are being defined and put into practice at L.B. Bohle.

In the 2015 business year, important exposure came from the trade fairs Interphex in New York and ACHEMA in Frankfurt am Main. In the US,L.B. Bohle realigned its sales team and intensified its activities. “The order we won from a multinational group for pharmaceutical granulation set the benchmark for further projects,” said an optimistic Lorenz Bohle.
At ACHEMA, the company attracted great attention from a national and international audience with its machines, the presentation of the Technology Center and its booth. “This trade-fair appearance gave us the desired boost for the second half of the year and will also carry us through 2016,” the owner Lorenz Bohle reports.

Plant 2 and 3 working in lean production

The high demand is also reflected by the capacity utilization of the production sites. In Plant 3, lean production is being established for process machines. The production processes are continuously being optimized. Similar to Plant 3, the plant for handling products in Sassenberg also operates in line with this type of organization. “Without lean production, we would already have reached capacity. In order to further increase the output, we are increasingly shifting orders to subcontractors for prefabrication,” states Lorenz Bohle. The integration of external processes into the internal quality standards is a crucial success factor here.

In early 2015, company-owner Lorenz Bohle set the course for a generation shift at the helm. The long-standing Sales Manager Tim Remmert took over more strategic tasks in management. In addition, the Manager Scientific Operations, Dr. Hubertus Rehbaum, was promoted to the management team as Assistant Managing Director. Thorsten Wesselmann assumed the position of Technical Manager in the management team. “The management team has truly proven itself already,” says Lorenz Bohle. Thus, his announced retirement from the day-to-day operations at the end of 2016 is well prepared.

Iran has to ease the current investment logjam

The financial independence of L.B. Bohle Maschinen + Verfahren GmbH is higher than ever in 2015. “Our equity ratio is over 50 percent,” Lorenz Bohle reported. Investments are being financed from current cash flow. “For 2016, we are in an excellent position with innovative products and a strong management team.“

Apart from the core markets in Europe and the US, potential for expansion exists in Russia, Latin America and Asia. “The opening of Iran has added another interesting market with an immense investment logjam in the pharmaceutical industry that needs to be reduced,” Lorenz Bohle explains. “The quality of German machines is held in high esteem in Iran. Therefore, we would like to take part in the reconstruction of the pharmaceuticals industry.”