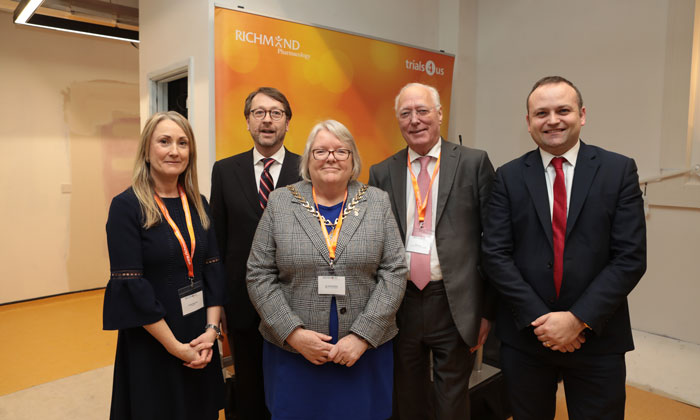 European Pharmaceutical Review was invited to the grand opening Richmond Pharmacology‘s new clinical research facility in central London. There was an enormous turnout for the event, with guest speakers including the MP for Southwark Neil Coyle, Sarah Haywood, Chief Executive Officer of Med City UK, Professor John Camm, Professor of Cardiology at St.George’s Hospital as well as Mayor of Southwark, Cllr Kath Whittam, to officially open the centre. 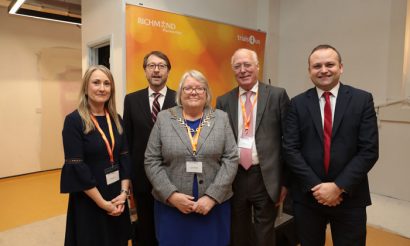 With Richmond having already conducted over 300 studies in London since their establishment in 2001, the new facility will provide a central London base for Richmond Pharmacology’s further research utilising their enhanced capabilities in delivering world-leading, early-phase clinical trials. The location is on the doorstep of several world renowned teaching hospitals which will further enhance Richmond’s established collaboration with London’s leading university and teaching hospitals.

Richmond Pharmacology specialise in conducting complex and cutting edge trials which are highly respected by the pharmaceutical industry and regulatory authorities responsible for licensing medicines worldwide, often in crucial disease areas such as oncology and amyloidosis.

Overall the company conducts approximately 10% of all Phase I studies performed in the UK and 1 in every 100 studies worldwide. 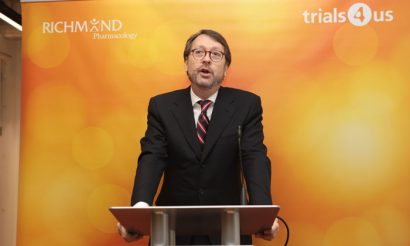 Richmond Pharmacology’s CEO, Dr Jorg Taubel, outlines the goals of the new centre, and Richmond’s ethos for business, in his introduction. You can listen to the full speech by pressing the play button on the sound clip below.

“It is always a very special privilege to open a new unit, a life changing thing really and I’m glad you could all come. I’m Dr Jorg Taubel and I’m the Chief Executive, and one of the three founders of Richmond pharmacology, and in fact, all of us are still here. It’s been 15 years and two days precisely since we opened our first unit in Wimbledon.”

The people of Richmond

“Let me just say what Richmond is about: We are Richmond, we are about innovation, creating knowledge, that’s what we do. And we are about healthcare. But Richmond really is its people.”

“That brings us to where we are today – I think we really do have a really nice new place. It is about access, so it is nice to have good premises and you will have noticed the central London location. It’s close to train stations, the underground and we have a lot of hospital beds around us, a lot of consultants, a lot of infrastructure – as any estate agent will tell you it is all about location, location, location – so here we are, in the middle of London, and I can’t think of any better place.”

“Richmond is about the creation of knowledge. We as a group are working in a very interesting space in clinical research. We are often the people who put a drug first into man. And, if successful, that means there will be further trials downstream. In the UK, we have an incredibly important and vibrant resourceful life sciences sector, supported by one of the world’s best – and actually I’ll make a case, it is THE best, regulatory agency, the MHRA. We want to make an important contribution to life sciences in the UK, and indeed in the world.”

“I think it is a little bit like the challenge of building a ship, although it is complex and difficult, the success really is derived from the continued maintenance of that operation, coming back again to people and processes. Ships need crews that are confident, that are well trained, and who work well together, to keep that ship afloat. That is what we do as a company.”

“Having this platform also makes us good partners for academic research, for those who don’t see us as competition, but as an additional skill set, to what they are going to be doing. We are more likely to be successful in taking a collaborative approach. And I believe very passionately about collaboration because to me, all human endeavours, come out of successful collaborations. Richmond is a collaborative business, through and through.” 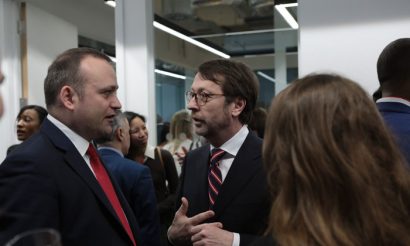 “I think the £350 million for the NHS per week is as likely to turn up as a herd of unicorns. It just isn’t going to happen”

Speaking at the opening event, labour MP for Bermondsey & Old Southwark, Neil Coyle, emphasised the importance of partnerships and community collaboration in an uncertain, post-Brexit world. You can listen to the full speech by pressing the play button on the sound clip below.

“This site has been famous for pioneering healthcare work for many years, not just from Guys and St. Thomas’ Hospital, who are the most of famous of [Richmond’s] new neighbours, but there’s a very strong local history of contributing to the health care sector here. Dr Alfred Salter was providing free healthcare to local people about 100 years ago and he went on to become the first labour MP for the Bermondsey area. He contributed to the development that led to the establishment of a National Health Service. So there’s a real community connection and I’m very proud to represent such a strong tradition of pioneering and world class healthcare, such as the work here.”

The future of the NHS

“I am so pleased that [Richmond] are opening their new facility at this particular juncture because there’s so much Brexit uncertainty in the UK at the moment. I opposed Brexit in parliament, I opposed it in the campaign, I voted against it at every opportunity, and not least because I think the £350 million for the NHS per week is as likely to turn up as a herd of unicorns. It just isn’t going to happen. So it’s important to have successful partnerships supporting the continued work of the NHS.” 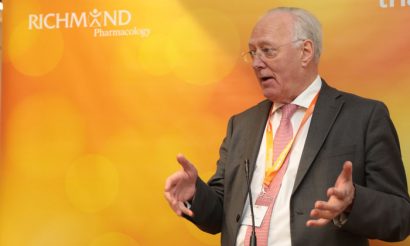 Dr John Camm of St George’s Hospital congratulates Richmond on the opening of their new unit, delighting in the historical significance of the centre’s location, the site formerly known as the Guy’s Drug Research Unit and the Axe and the Bottle Public House. You can listen to the full speech by pressing the play button on the sound clip below.

“I’m a cardiologist – interested in the heart, and cardiovascular disease. I’m interested in the impact of drugs that both help with heart disease problems but also those that harm the heart. Many drugs have the potential to cause great problems with the heart, so any organisation, such as Richmond Pharmacology, has got to be, intimately involved with looking for any problems that might develop with a drug.”

“We have had a strong collaboration with Richmond Pharmacology at St George’s. We do a lot of collaborative research – it’s a wonderful resource to have such well recorded electrocardiograms, well documented cases with vital signs and all the right kind of information. I’m sure that Richmond Pharmacology will start new collaborations with the hospitals around this new centre and that will be good, for all. I wish them every success on this occasion – well done and good luck.”

“Clinical trials are an essential part of the process to bring new healthcare products to patients. London and the UK offers an ideal location for clinical studies. London with 8.3 million NHS patients, a third of which were born overseas, provides an excellent platform for clinical research organisations like Richmond Pharmacology.”

You can listen to her full speech by by pressing the play button on the sound clip above. 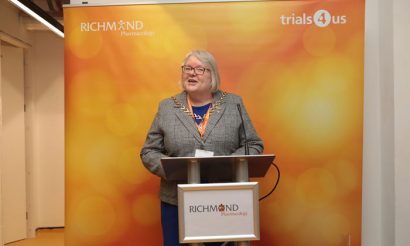 Richmond’s decision to expand their London research footprint was driven by: