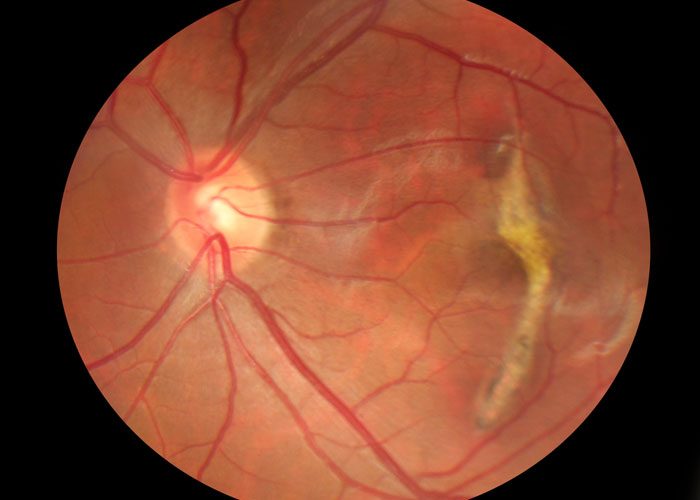 Results from two early clinical trials show that it may be possible to use human embryonic stem cells as a treatment for the dry form of macular degeneration. Stem cells, when injected into the eye, appear to replace the missing cells damaged by the disease, with no serious side effects.

In both studies, researchers turned embryonic stem cells into a type of retinal support cell, called retinal pigment epithelial (RPE) cells, and injected them into the eyes of people suffering from dry age-related macular degeneration (AMD), a leading cause of new blindness in people over age 55. There is currently no treatment available for this disease affecting 30 million people worldwide, though nutritional supplements can be protective.

In a healthy retina, RPE cells provide supportive functions such as nutrition and waste management for photoreceptors, the cells that process light, allowing us to see. Dysfunction and degeneration of RPE cells are part of the process that leads to a visual loss in age-related macular degeneration. The human embryonic stem cell-derived RPE cells injected under the retina are designed to support and/or replace the patient’s failing RPE cells.

Experts in regenerative medicine believe that macular degeneration will be one of the first areas of success with stem-cell therapy. This is because it is relatively easy to grow large numbers of RPE cells in the lab. These cells are nearly identical to those in the eye. RPE cells do not require formation of neuronal connections to support the photoreceptors within the retina. Also, the location in the eye in which the cells are transplanted is recognised as an immune-privileged site, meaning it’s one of the very few sites in the body in which the risk of rejection of the transplanted cells is low. Lastly, the treatment can be accomplished with a small number of cells in a very localised area, reducing the risks.

The researchers from Hadassah-Hebrew University Medical Center in Jerusalem, Israel, conducted studies designed to test the safety of the procedure in human subjects. They injected a suspension of either 50,000 or 200,000 RPE cells derived from human embryonic stem cells underneath the patients’ retina. The surgical procedure was well-tolerated. Within a few weeks, they could see signs that the retina was healing at the injection site, and images of the back of the eye suggest the possibility that the transplanted RPE cells survived. Patients’ vision remained largely stable throughout the study, and they suffered no unexpected side effects.

“We’re encouraged by the results thus far,” said  Dr Eyal Banin, lead investigator and one of the developers of the technology. “But this is just a first step in the long road towards making regenerative cell therapy a reality in macular and retinal degeneration.”

An additional trial site for this stem cell treatment is expected to open soon in the United States.

A second research group from Bascom Palmer Eye Institute in Miami has conducted two studies using RPE cells derived from human embryonic stem cells to treat patients with dry AMD, as well as patients with a different form of retinal degeneration called Stargardt disease. It’s the most common form of inherited juvenile AMD. Like dry AMD, there is no treatment available for this blinding disease.

“RPE cells appear to be well tolerated in the human eyes,” said lead researcher Dr Ninel Z. Gregori, of Bascom Palmer Eye Institute. “There were no serious adverse events attributable to the transplanted RPE cells, including no tumour formation. “This study supports further development of human embryonic stem cell-derived RPE for degenerative diseases of the macula.”