Artificial DNA can control release of active ingredients from drugs

A team at the Technical University of Munich have made it possible for nano particles to be released in sequence with the use of artificial DNA. 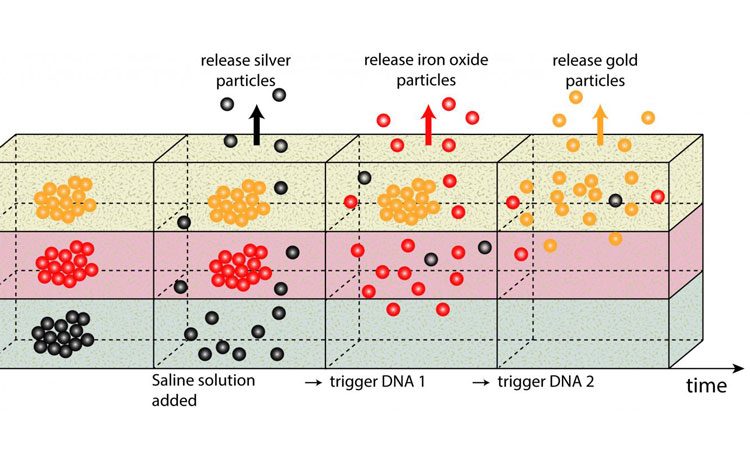 Different kinds of nanoparticles are bound together by DNA fragments and Ceren Kimna them released at specific times. Such connections may become the basis of drugs that release their active ingredients in sequence (credit: Ceren Kimna/TUM)

Oliver Lieleg, a professor of biomechanics and a member of the Munich School of BioEngineering at TUM, and doctoral candidate Ceren Kimna have developed a process that could serve as the basis for medications containing several active ingredients that would reliably release them in the body in a pre-defined sequence at specified times.

To do this, they used nanometer-sized silver, iron oxide and gold particles embedded in hydrogel. They then used a spectroscopic method to track the exit of the particles from the gel. The particles selected by the researchers have similar motion characteristics within the gel to the particles used to transport real active ingredients, but are easier and cheaper to make.

The special ingredient controlling the nanoparticles was artificial DNA.

The silver particles were released first. In the initial state, the particles were bound together by DNA fragments designed by Lieleg and Kimna using special software. The resulting particle clusters were so large that they were unable to move in the hydrogel. However, when a saline solution was added, they separated from the DNA. They could then move in the gel and drift to the surface.

“Because the saline solution has approximately the same salinity as the human body, we were able to simulate conditions where the active ingredients would not be released until the medication is applied,” explains Ceren Kimna.

As a result, the iron oxide particles could separate. This releases DNA fragments which, in turn, act as the key to the third DNA-nano particle combination.

“The consistency of ointments makes them the most obvious solution for a hydrogel-based approach. However, this principle also has the potential to be used in tablets that could release several effective ingredients in the body in a specific order,” explained Professor Lieleg.

This study was published in the Journal of Controlled Release.