Using plants as bioreactors to produce proteins for therapeutics

European Pharmaceutical Review explores how plants can be used for large-scale, glycosylated protein bioproduction for the pharma industry. 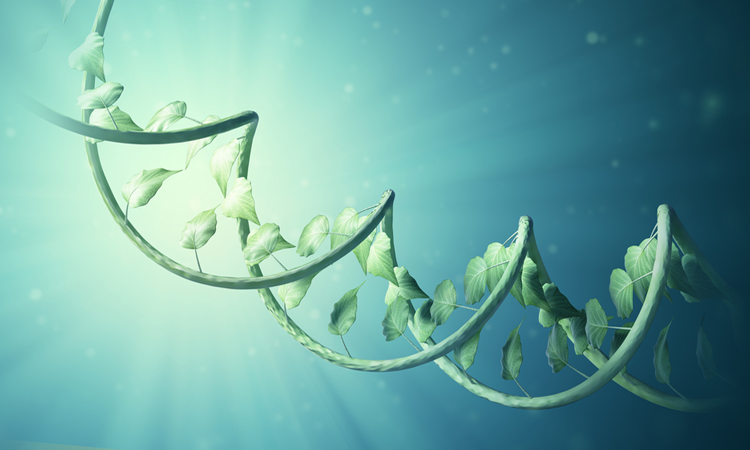 Plants can be used to produce large quantities of complex proteins, particularly glycosylated proteins, which are becoming more widely used in a range of therapies. Monoclonal antibodies (mAbs) are among the types of glycosylated proteins that plants can produce, but while there are multiple benefits to their use as ‘bioreactors’, there are also some key considerations.

This article explores why and how plants can be used to produce proteins for use in therapies, but also the factors that show this method may not be applicable to all protein products.

How can plants be used to produce proteins?

For plants to produce synthetic proteins, they must first be expressed somewhere within their genome. This requires some form of recombinant protein expression or genetic engineering, and to achieve optimum yield just implanting the gene is insufficient. To achieve a high level of transcription, which allows for downstream translation and protein modification for stability, the regulatory gene elements – including the promoter and polyadenylation site – must also be expressed.1

Nuclear expression involves genetically modifying the genome in the nuclei of plants cells to express a protein. This is the simplest and most widely used approach in the pharmaceutical industry, as it can be achieved with viral vectors, but a more modern technique is CRISPR-Cas9 technologies.1 A 2018 study showed that in cotton, CRISPR showed no off‐target editing and an editing efficiency of 66.7 to 100 percent at each of multiple sites.2 The nuclear expression techniques, although reliable, are becoming less popular as they typically require more time to develop. 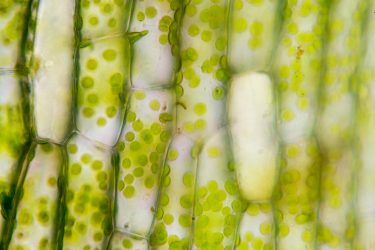 The second method involves expression of a recombinant protein in the chloroplasts requires a particle gun to insert the transgene. There are several benefits to this technique, including the ease of manipulating the chloroplast genome compared with the nucleus and the number of chloroplasts per cell, which increases yield. Using a transgene cassette to precisely target and insert the foreign gene avoids placing it into a poorly transcribed part of the genome, ensuring a high level of expression and little chance of silencing. Transgenes are commonly integrated between the trnl‐trnA genes in the rrn operon, as this is a transcriptionally active region offering high levels of gene expression.1

The third mechanism, transient expression, is becoming more common as it allows the rapid insertion of proteins, with little time required for the production, modification and optimisation of the expression system. Some companies have begun marketing this kind of expression for the rapid, large-scale production of proteins for therapeutics. The Agrobacterium‐mediated transient expression technique is purported to have better efficiency than the integrated gene systems and the ability to reach a high percentage of cells in a treated tissue, resulting in higher yields.1

Why use plants as bioreactors?

In prokaryotic cells, like Escherichia coli (E. coli), protein size is limited to less than 30 kilodaltons, mainly due to reliability of production and yield. However, in eukaryotic cells, eg, Chinese hamster ovary (CHO) and plant cells, it is easier to produce larger proteins with high yields.1

According to experts, when using cell line or bacterial production methods – such as CHO cells and E. coli – to produce proteins, once the initial cell line is created it is often difficult to scale up, as glycosylation profiles become variable.3 The inconsistencies in protein product both cost money and result in waste.

On the other hand, dependent on expression mechanisms, plants can reliably maintain the glycosylation profile required even as bioreactor volume increases.

As a result of consistent production capabilities, plants do not require scale-up protocols. This saves both time and money when setting up a bioreactor.

A further advantage is that, if the plant is made to generate the protein through a transient expression system, there is very little time required to set up a production system. One company claims their tobacco plant-based system can be tailored for large-scale fabrication of a protein product in under 12 months, compared to 20-22 months with CHO or E. coli, 3 and one study suggests this could be done in a matter of weeks.1

There are multiple options for plant expression systems, particularly with regards to species, and each is best suited to produce different proteins. Genetic engineering can also be employed to allow customised N-glycosylation to generate different target products. 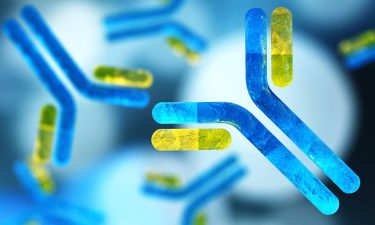 The plant industry is well established, with conditions for growth often being less complex than that of cell lines or bacteria and, dependent on choice of plant species, cultivation costs can be further reduced.

A techno-economic analysis of the theoretical set-up of a new large-scale biomanufacturing facility, producing mAbs using tobacco plants, found that compared to CHO production platforms, the plant system resulted in significantly reduced capital investment. Moreover, the model calculated that there would be more than a 50 percent reduction in the cost of goods, compared with published values for similar products at this production scale.4

One company has paved the way for the creation of ‘biobetters’, using their FastGlycaneering Development Service™. iBio has shown that certain methods of plant bioproduction can improve the potency and homogeneity of biological medicines and ensure fully humanised glycosylation patterns.

Compatible with AI and blockchain

iBio have also stated that their system, due to its consistencies in upstream processing, is compatible with artificial intelligence (AI). The company aim to implement a new end-to-end manufacturing process using AI and blockchain to reduce costs through optimising both the process and workflows.3

Some of the major challenges include regulatory approval, environmental contamination, protein stability and the immunogenicity of non-human post-translational modifications.1

Environmental concerns are predominantly from the possibility of spreading genetic modifications to food crops through pollination. This is more of a concern with the nuclear expression systems than transient or chloroplast expression. However, this can be overcome with geographical or physical containment, using a less transferable genetic modification method or through using a self-pollenating species.1 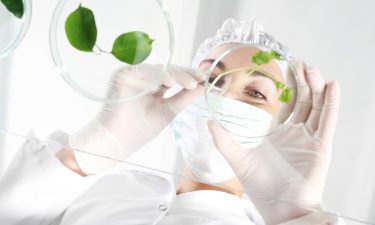 A review suggested that companies are unlikely to go through the cost of a shift from an already approved production system to seek regulatory approval for a new one.1 While altering an approved process is often unfeasible, setting up systems for the production of new products in the pipeline could prove to be more cost effective in the long run. Another consideration is the rising need for quick, large-scale vaccine production in response to pandemics and epidemics – such as the Covid-19 coronavirus and Ebola – which, due to the speed at which a transient expression production system can be constructed, could encourage companies to branch into this type of production.

Protein stability is a concern, as plants have endogenous enzymes that can break down the protein products. Some methods to overcome this include changing plant species and co-expressing peptides to fuse and stabilise the produced proteins together.

Post-translational modifications such as Asparagine-linked glycosylation (N-glycosylation) are one of the key worries, as they can be immunogenic. Particularly likely to cause unfavourable side effects are N-glycan modifications, because they differ in plants and humans.

N-glycosylation is a post-translational modification conducted on many secreted or membrane proteins in plants and mammals. Endogenously, it enables protein folding, stabilisation and protein-protein interactions. It is similarly used in pharmaceutical bioproduction to stabilise products and provide antibodies and other proteins the correct pharmacokinetic properties and immunogenicity.5,6

The plant industry is well established, with conditions for growth often being less complex than that of cell lines or bacteria”

While early N-glycosylation and N-glycan modifications are highly conserved between yeast, mammals and plants, later N-glycan modifications differ; they are more simplified in plants than mammals.5,6 So, to use plants as producers of fully humanised proteins, the plant glycosylation machinery is often removed and replaced with human machinery when the plant is modified to express the protein. Of note, chloroplasts have no glycosylation machinery, so cannot perform these modifications without the insertion of foreign DNA; although this can reduce immunogenicity of the products, it can limit which proteins can be produced by chloroplast expression.

Tobacco is the most widely used plant for production of recombinant proteins in the lab. High yield and rapid scale-up, due to large numbers of seeds produced, are the primary benefits. However, proteins stored in the leaves are vulnerable to degradation and must be stored or extracted appropriately, in a timely manner. Tobacco tissues can also contain phenols and toxic alkaloids that must be removed in downstream processing to make products safe.1

Cereals are primarily used due to their seed protein storage capabilities; cereal seeds have protein storage vesicles and a dry intracellular environment. Once dried, the seeds can be stored at room temperature with limited degradation to protein products or loss of activity. Use of food crops is particularly attractive as they offer the opportunity to administer oral vaccines produced in the crop by feeding them to patients with minimal processing. Some edible vaccines have reached Phase I trials.1

Peas are a particularly attractive option, as they have high protein content in their seeds – similar to cereals – and have lower nitrogen requirements, reducing cultivation costs. However, legumes usually have less leaf biomass than tobacco, meaning they require a larger area to produce the same quantity.1

Plants can be modified through several methods to express proteins and the requisite promoters and transcription controllers, for the production of therapeutic proteins. There are several important considerations, including protein expression methods and plant species; however, the many benefits, including reduced costs, adaptability and speed associated with plant bioproduction systems make them an attractive option.

A particular driver of this bioproduction process is the possibility of using transient expression to produce vast quantities of highly potent, fully humanised vaccines in response to pandemics and epidemics.