Polyelectrolyte multilayering: an emerging class of carriers for therapeutic agents

Polyelectrolyte multilayers (PEMs) are promising drug carriers with potential applications in the delivery of poorly soluble drugs. In this article, Sumayah Abdul-Jabbar and Paul Royall discuss the approaches for PEM construction and drug release and detail several applications of multilayered particles in therapeutics. 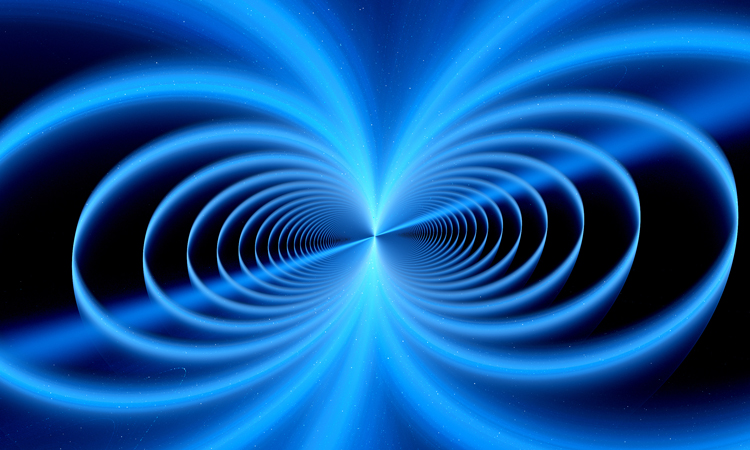 A POPULAR APPROACH to solubilise poorly soluble drugs is encapsulating them within polymers by forming micelles or liposomes.1 However, there are limitations associated with these carriers, such as low-loading efficiency of the drug, difficulties with scaling up and inadequate storage stability. PEMs are novel vesicles that have proved to be promising drug delivery vehicles for drug encapsulation.3 PEMs are designed by the stepwise deposition of polymer layers; therefore, particles can be tailored during fabrication to vary properties. This enables the formulation of versatile materials with multiple functionalities and a variety of properties.4 In addition to drug delivery, they are used in bio-sensing, regenerative medicine, tissue engineering, bio-mimetics research5 and diagnostic and theranostic applications.6 The European patent office holds patent applications for the use of PEMs in biosensors (priority number: KR20090041461 20090513) as well as in controlled and sustained release (priority number: EP20000118615 20000828).

Polyelectrolytes themselves play an important role in drug delivery as, in addition to the formation of multilayers, they are also recognised for the formation of complexes for drug delivery.7 PEMs contribute towards both steric and electrostatic interactions, which collectively enhance the physical and chemical stability of colloids when compared to those prepared by other approaches.8 The construction of a PEM is mainly driven by electrostatic interactions. These layered structures are a consequence of the alternating exposure of a charged substrate to solutions of positive or negative polyelectrolytes, whereby each adsorption step leads to a charge inversion of the surface (Figure 1) – the approach is often referred to as layer-by-layer.9

Figure 1: Schematic representation of the layer-by-layer. The first step (i) shows adsorption of a positively charged polyelectrolyte onto an oppositely negatively charged colloidal template. In the second step (ii), a subsequent polyelectrolyte layer with a negative charge, opposite to the first one, was adsorbed. This process is repeated until the desired number of layers is achieved.

The approaches for PEM construction are versatile and can be broadly categorised into five distinct routes of assembly: immersive, spin, spray, fluidic and electromagnetic.

Spin assembly utilises the common coating technology of spinning a substrate to facilitate the deposition of materials.10 Spray assembly constructs layers by aerosolising polymer solutions and sequentially spraying them onto substrates.11 Fluidic assembly involves using pressure or vacuum to build multilayers using fluidics that are pushed through a capillary12 utilising specialised equipment. Electromagnetic assembly is based on the use of an applied electric or magnetic field to perform layering.13 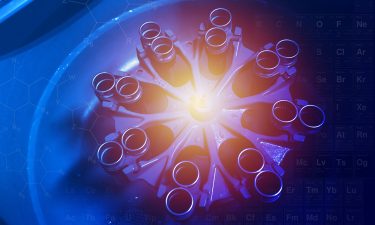 Immersive is the traditional approach and it involves dispersion of the substrates in a surplus polymer solution followed by pelleting using centrifugation.14 Centrifugation removes any excess polyelectrolyte by collecting the particles and re-suspending them in an appropriate buffer solution (washing step).15 This is the most widely used method for PEM construction. However, adding the exact amounts of polymer dramatically reduces the need for a washing step.14 Developmental work is required to determine the precise polyelectrolyte concentration that is sufficient to prevent bridging flocculation but not in excess, as this can cause depletion flocculation due to presence of free polyelectrolytes.15 This approach, if executed successfully, can allow the sequential fabrication of PEMs.

It is apparent from the formulation method that the particles can be tailored during fabrication to achieve various properties such as size, composition, porosity, surface functionality and colloidal stability resulting in a tuneable approach for generating functional films for a variety of applications.

There are two main approaches for drug release (Figure 2). Furthermore, tailoring the number of layers and type of polymers used can achieve both controlled and sustained drug delivery.19 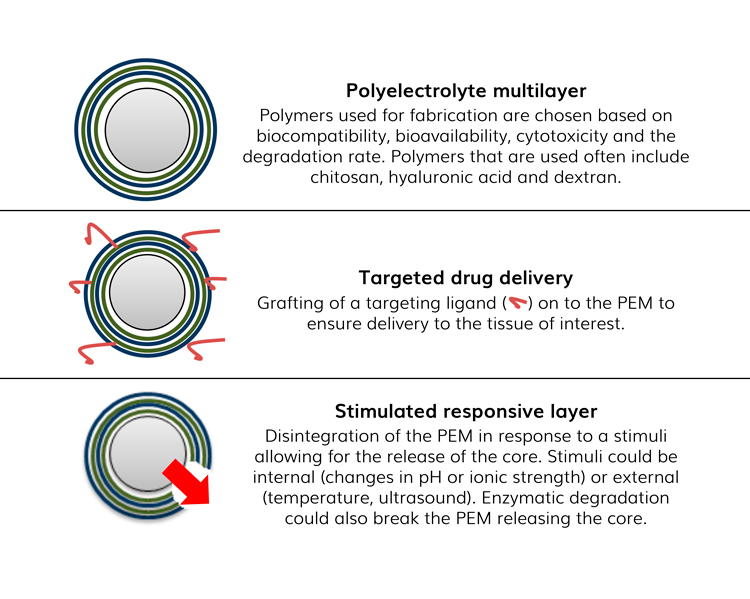 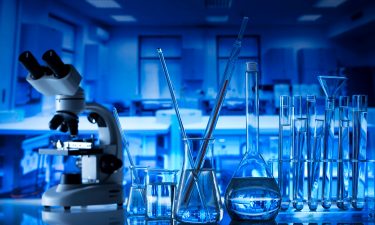 Both PEMs grafted with folic acid21 and PEM‑layered quantum dots5,22 showed an increase in cellular uptake by cancer cells in vivo. PEM‑layered polystyrene particles with adsorbed HuA33 mAb provided an immunotherapeutic approach for cancer therapy.23 PEMs fabricated on liposomes provided a platform for compartmentalised microreactors or multidrug delivery systems with controlled release.24 PEM fabricated on dental titanium implants promoted the formation and healing of soft tissues and improved the antibacterial properties of the titanium implant.25

Gold nanoparticles were coated with the oppositely charged polyelectrolytes siRNA and poly (ethyleneimine). This process offered a unique opportunity to fabricate well-defined and homogenously distributed nanocarriers for siRNA delivery.26 Layer-by-layer assembled nanoengineered hydrogel capsules represented a novel and promising technology for the protection and delivery of labile vaccine candidates to antigen‑presenting cells. Proteins, as well as peptides, were successfully encapsulated within nanoengineered capsules.27 Most recently, polyelectrolyte multilayers have demonstrated a role in antimicrobial therapy.28-30

In conclusion, layer-by-layer assembly is a simple process for fabrication leading to one of the most widely accepted platforms for incorporating molecules with nanometre precision.31 In addition, the application of multilayered particles in therapeutics is rapidly emerging, providing an avenue for obtaining multifunctional, biocompatible and biodegradable coatings that are valuable in drug delivery.

Dr Sumayah Abdul-Jabbar is a pharmacist and a researcher with various research interests including nanoparticle formulation and stability, with a focus on the use of polyelectrolyte multilayers for enhanced drug delivery of novel therapeutic agents.

Dr Paul G Royall is a Senior Lecturer in Pharmaceutics within the Department of Pharmacy at the Institute of Pharmaceutical Science, King’s College, London. He is a materials scientist focused on developing new platforms for drug delivery and has an interest in the stability of medicines.