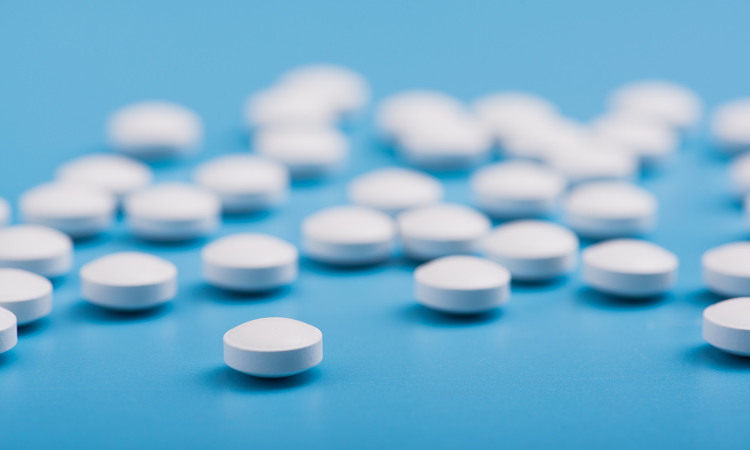 In solid dosage formulations, glidants are added to the blends with the intention of improving their flow. Methods to characterise the flowability of blends are numerous and include conventional angle of repose, critical orifice and other more innovative methods of characterisation using powder rheometers.1,2 Powder rheometers have the advantage of being able to evaluate the bulk, shear and dynamic flow properties of blends.3 The primary goal of this work was to carry out a systematic evaluation of flow improvement by different flow additives using different analytical methodologies, and then compare the flowability results collected from the different tests with final tablet attributes.

Table 1: List of formulations prepared with different excipients and glidants/lubricants

Mixtures of 100g containing 1 percent Cb, Sy, MgSt, and Cb and MgSt were mixed in a TURBULA® mixer (32rpm). For blends containing both Cb and MgSt (ternary blends), excipients were firstly mixed with Cb and then with MgSt (Table 1).

For all the blends, the presence of Cb within the formulation showed to reduce the tablet weight variability”

The angle of repose (AoR) test, which measures the angle of a conical pile produced when a powder material is poured onto a horizontal surface, and the critical orifice diameter test, which measures the lowest orifice aperture through which the powder falls freely on three successive attempts,5 were performed for the individual diluents and blends. The results of the critical orifice diameter test are expressed in terms of a flowability index (FI), which is the smallest diameter orifice in a base plate disc through which powder will discharge.

Individual materials and blends were also characterised in a FT4 powder rheometer (Freeman Technology). The FT4 is a universal powder tester, combining patented blade methodology for measuring flow energy.6 This technology allows the measurement of flow energy in relation to many variables and packing states. In this study, the stability, shear cell and compressibility tests7-9 were applied to the different formulations.

Tablets with 250mg weight were produced with all the formulations containing MgSt in a Riva PICCOLA rotary tablet press by direct compression, enabling the physical attributes of each tablet formulation to be compared with the flow characteristics of the blends.

Angle of repose and flowability index of binary blends 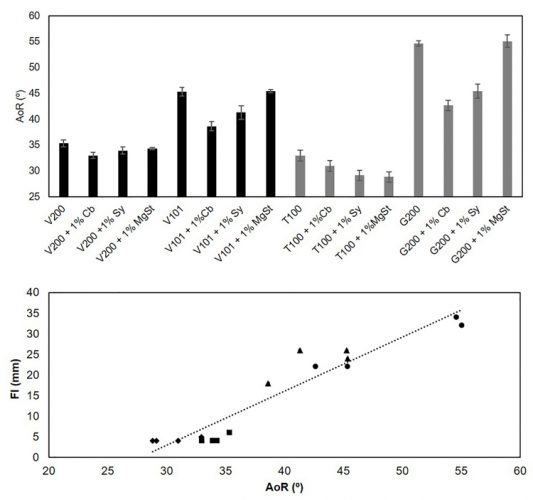 Figure 1: Angle of repose tests (top) and comparison between angle of repose and flowability index of single excipients and binary mixtures (bottom)

Figure 1 shows how the AoR and FI of the individual excipients are impacted by the addition of Cb, Sy and MgSt. Results showed that the addition of 1 percent Cb and 1 percent Sy led to a significant reduction of the static angle of repose of each powder (p-value <0.05) indicating an improvement in flowability. MgSt, however, demonstrated the least influence on the improvement of powder flow, especially in smaller particle size materials where its addition did not lead to a significant reduction of the blend’s AoR. Regardless of the additive, the reduction of AoR was aligned with the reduction of the orifice diameter in which the powders flow freely (Figure 1).

With regard to the cohesion values taken from the shear cell test, it was observed that MgSt addition led to the formation of more cohesive blends, especially when blended with smaller particle size diluents, such as V101 and G200. For the blends containing Cb and Sy, a reduction of the blends’ cohesion was observed upon glidant addition. The cohesion results were also aligned with the reduction of the AoR promoted by the flow additives (r=0.80; Figure 2b). 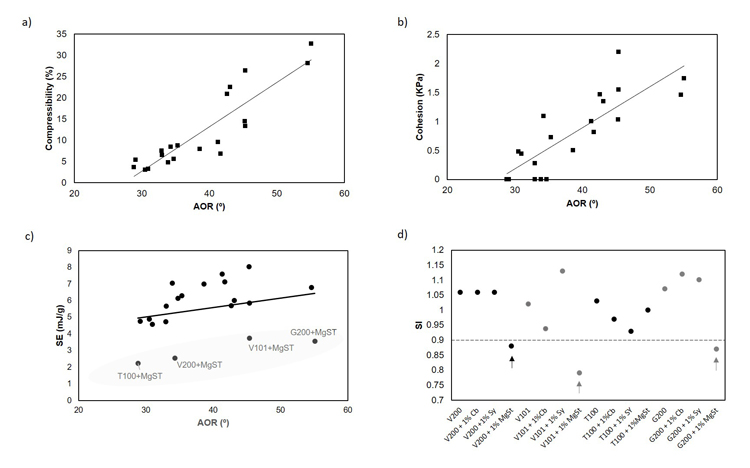 Figure 2: Comparison of angle of repose results with compressibility index (a), cohesion (b) and specific energy (c) of single excipients and binary blends. Stability index of the different mixtures is shown in (d). Arrows on the graph highlight how MgSt addition reduced the stability index below 0.9.

In the case of specific energy (SE), which is taken from the stability test, all the glidants showed to decrease the SE of the diluents, indicating that they have a positive effect on the reduction of friction and interlocking between particles. However, MgSt displayed the greatest decrease in SE (Figure 2c), indicating lower interlocking and friction between particles in this mixture.7

Due to the differences of this dynamic test to the other tests, the results obtained by this test could not be linearly compared with the others (Figure 2c). Nonetheless, it is important to mention that powder flowability is not an inherent material property but is related to the ability of powder to flow in a desired manner in a specific handling or processing situation.

Silica-based glidants promoted flow improvement in all the excipients tested, regardless of their particle sizes”

Stability index (SI), also taken from the dynamic stability test, indicates how the powder’s flow energy varies when it is made to flow at a constant speed. In the case of blends containing MgSt, this value showed to be below 0.9 (Figure 2d), indicating that these blends have a decrease in the total energy consumed during the test. This may be explained by the continuous distribution of this additive during testing as a result of a poor blending efficiency during the previous blending step. Another reason for this low value is the ability of MgSt to coat the blade and vessel walls, resulting in reduced friction properties during the test. As the stability test progresses, the coating increases, causing a decrease in the consumed total energy.

Figure 3: Comparison of angle of repose results (a) and specific energy (b) of different formulations containing Cb, MgSt or a mixture of both

Powder rheometers have the advantage of being able to evaluate the bulk, shear and dynamic flow properties of blends”

SE values also showed that MgSt could not significantly reduce the blends’ specific energy when Cb was first mixed to the different diluents (Figure 3b). Furthermore, when MgSt was added after Cb to the blends, repeatable SI values close to unity were observed (namely, 1.03, 1.05 and 0.95 for G200, V200 and V100, respectively), which are higher SI values than the ones obtained in binary blends containing MgSt. This indicates that a uniform mixing of this additive was achieved during blending. This is aligned with previous studies where it was suggested that prior glidant addition to the blends may aid the MgSt distribution within the blend, meaning that homogeneity may be reached more quickly.10 Furthermore, due to the small size of Cb and the ability of MgSt to adhere to Cb surfaces, it is expected that Cb can also coat MgSt during blending,11 resulting in fewer available MgSt molecules to coat not only the substrate particles, but also the blade and vessel surfaces during the test. Thus, SI and SE results showed to be suitable parameters to understand not only how these additives are able to reduce particle friction and improve the flow, but to also gain insight about how these additives may be distributed within the blend.

Tablets were prepared with all the formulations containing MgSt (Table 1). Tablet weight variation showed the highest correlation with compressibility percentage, obtained in the compressibility test in FT4 rheometer (r=0.96, Figure 4a) and the AoR test (r=0.91, Figure 4b). In general, for all the blends, the presence of Cb within the formulation showed to reduce the tablet weight variability. 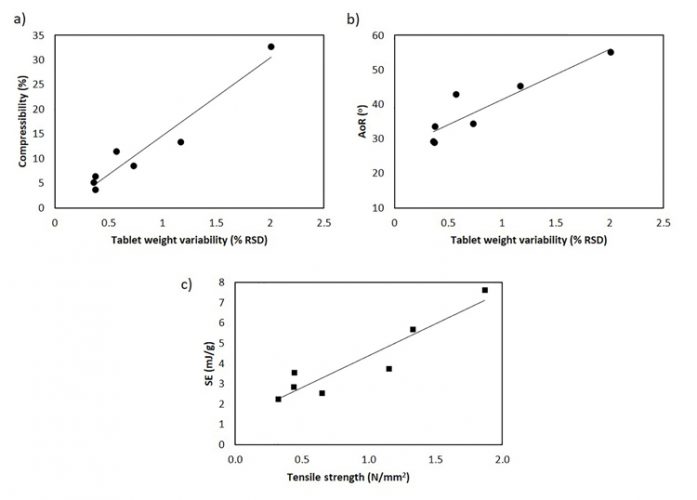 Figure 4: A comparison of tablet weight variability with compressibility percentage (a) and angle of repose (b).
Comparison between specific energy and tensile strength (c).

Regarding the tablets’ tensile strength, the highest correlation was found with the blends’ specific energy results (r=0.93; Figure 4c). Blends containing only MgSt made more fragile tablets, probably because MgSt coats the diluent particles’ surfaces reducing their interparticle bonding – a property required for the formulation to undergo plastic deformation during tabletting.12 On the other hand, when Cb is present within the blend, this flow additive can coat MgSt particles during the blending step,11 resulting in fewer MgSt particles available to coat diluent particles, which ultimately results in tablets with a higher tensile strength.

Among the flow additives tested, silica-based glidants promoted flow improvement in all the excipients tested, regardless of their particle sizes. The stability test was shown to be a suitable test to detect if additives are homogeneously mixed within the blend. Apart from the stability test, all the other rheometer tests showed results that were comparable with the more conventional AoR test. Compressibility and AoR tests were the tests with the highest correlation with the tablets’ weight uniformity. The specific energy data, which indicates how particles interlock between each other upon movement, showed a good correlation with the tablets’ tensile strength. The conclusions of this study highlight the importance of considering the impacts that glidants and lubricants may have on flowability and final tablet physical attributes.

Vanessa Sainz is a pharmacist and received her master’s degree in 2012 from Instituto Superior de Ciências da Saúde Egas Moniz. In 2018, Vanessa received her European PhD in pharmaceutical technology from Faculdade de Farmácia da Universidade de Lisboa. Her research background is in cancer immunology, nanoparticles and tablet formulation. She has published articles in high impact factor scientific journals and has worked at Hovione since 2017.