This article delves into four health technology assessment agencies, analysing the opportunities and challenges for orphan drugs in France, Germany, England and Scotland. 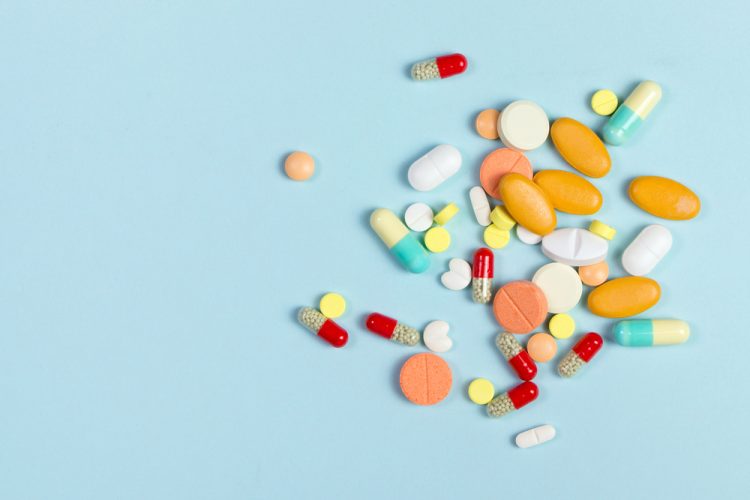 To encourage manufacturers to invest in the development of Orphan Drugs (ODs), various incentives have been introduced including research and development grants, tax incentives, accelerated regulatory processes and 10-year market exclusivity. However, ODs still need to overcome a series of challenges posed by health technology assessment (HTA) bodies, which are unique in each European market. ODs can often launch with highly uncertain evidence packages which may include immature Phase II single arm trial data with a small patient number.

The aim of this study was to review and compare the reimbursement recommendations for ODs issued by four of the most well-established European HTA bodies (France, Germany, England and Scotland) and assess the potential effect of HTA outcomes in relation to time to reimbursement (T2R). Specific objectives were to: 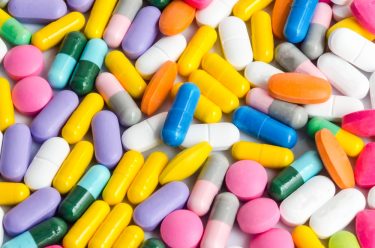 The study reviewed all 80 products that received a positive European Medicines Agency (EMA) authorisation from 2013 to 2019 and an OD designation (ODD) at launch. The HTA outcomes and T2R were identified for all products across the four markets. The T2R was calculated from the EMA approval to the date of the negotiated price (France and Germany) or to the date of the UK National Institute for Health and Care Excellence (NICE) and Scottish Medicine Consortium (SMC) appraisal (England and Scotland). A comparative analysis was conducted on the 71 approved products that were awarded a price in at least one of the four markets.

This study identified that the rate of recommendation by respective HTA bodies was highest in Germany, where 98 percent of the total number of drugs reviewed by the Gemeinsamer Bundesausschuss (G-BA) were approved, compared to 92 percent reviewed by the transparency committee (TC) in France, 91 percent in England and 67 percent in Scotland following NICE and SMC appraisal respectively. Despite the highest approval rate, most products in Germany (73 percent) were awarded with a non-quantifiable benefit, skewed by the automatic additional clinical benefit rating for ODs.1 Conversely, only 19 percent of the ODs in France were awarded an Amelioration du Service Médical Rendu (ASMR) V, no improvement of medical benefit (Figure 1). The data also suggest that NICE and SMC have a greater tendency to include restrictions beyond the label (37 percent and 24 percent, respectively) in order to achieve a positive recommendation. 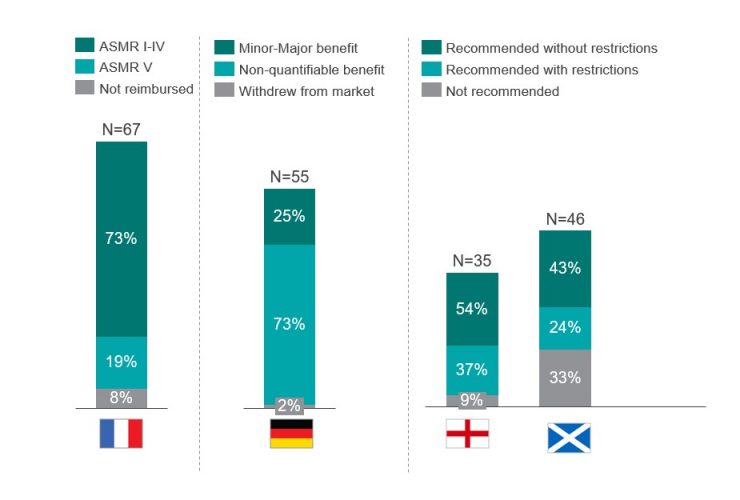 Figure 1: Assessment of the HTA outcome in France, Germany, England and Scotland of all ODs that obtained an EMA approval between 2013-2019. N above each bar equals the number of drugs reviewed by the respective HTA body [credit: CRA analysis].

The analysis suggests a correlation between a favourable HTA outcome and a longer T2R (Figure 2). Markets with the largest discrepancy include Germany, with the T2R being about 1.4 times longer for drugs with positive ratings (minor to major added benefit) versus products with a non-quantifiable benefit. In France, products with an ASMR IV-V (67 percent of the products approved), were reimbursed after 427 days on average, versus 585 days for those with an ASMR I-III. Similar trends were also seen in England and Scotland, where the T2R for ODs accepted without restrictions were about 1.2 and 1.6 times longer than those accepted with restrictions by NICE and SMC, respectively.

Figure 2: Comparison of the T2R (days) for EMA ODs approved from 2013-2019. ODs were reimbursed in at least one of the selected markets (N = 71). N within each bar equals the number of drugs with each outcome reviewed by the respective HTA body [credit: CRA analysis].

In France, our findings suggest that an early access authorisation (ATU) may correlate with a longer T2R for ODs. More specifically, the average T2R for ODs launched with and without an ATU in 2018 was 251 and 122 days, respectively. This is consistent with the 2018 annual report of the Pricing Negotiations Committee (CEPS) and may be due to the lower incentive for manufacturers to expedite the price negotiation if a product is already available in the market.2,3

In England, although the single highly specialised technology (HST) pathway supports broader criteria for the cost-benefit assessment of ultra-ODs and a higher cost per quality-adjusted life year (QALY), our data showed that HST does not speed up T2R (494 days with HST versus 470 days with a single technology appraisal (STA)). Furthermore, inclusion of a patient access scheme (PAS) suggests a longer T2R in England, (523 days versus 311 for products with [N=25] and without [N=7] a PAS, respectively).

Despite several regulations and concessions to support better outcomes for ODs, we found that reimbursement assessments are inconsistent across the EU markets included in this study. As a result, manufacturers continue to face access challenges.

Although Germany had the highest approval rate of ODs at 98 percent, this was achieved predominantly (73 percent) with an unquantifiable benefit. A more favourable outcome from G-BA took on average 1.4 times longer to achieve a final negotiated price (708 versus 510 days). France and England had comparable approval rates (92 percent and 91 percent, respectively); however, the TC in France reviewed almost twice the number of ODs over the period of our analysis (67 versus 35). A high proportion (67 percent) achieved an ASMR rating of IV-V, suggesting that reimbursement was achieved at a potentially lower value but in a quicker timeframe than products with an ASMR I-III (427 days versus 585 days, respectively). 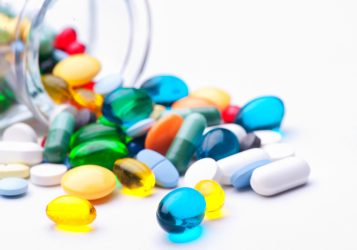 In England, two key mechanisms were often used to achieve approval: restrictions or PAS. Over one third (37 percent) of ODs appraised by NICE achieved approval in a restricted population versus the regulatory approved label. Moreover, accepting such restrictions enabled faster appraisal time compared to no restrictions (407 versus 505 days, respectively). Although introducing a PAS improved the chance of approval, our analysis also suggests it delays the overall appraisal time (523 versus 311 days, respectively).

Finally, the highest rate of non-approval was observed in Scotland. Despite specific modifiers in place for ODs, including the incorporation of patient and clinician engagement (PACE), 33 percent of drugs reviewed by the SMC were not accepted. More than 70 percent of these products were rejected by the SMC based on insufficient justification of the treatment costs in relation to health benefits and a lack of robust clinical or economic analysis. The remainder of products were not recommended due to lack of manufacturer submission.

Overall, the concessions and modifiers introduced in the HTA process for ODs have a positive impact on minimising rejections and accelerate the T2R. However, obstacles remain to capture the full value of ODs within the HTA process. Achieving more favourable outcome ratings, avoiding restrictions or addressing uncertainty with a PAS all lead to prolonged appraisal times. Manufacturers are therefore still required to carefully consider their HTA launch strategy and complement this with additional evidence generation and engagement from a wider stakeholder group. In addition to existing regulations and concessions, further flexibility and alternative approaches to address uncertainty in HTA processes is needed to improve reimbursement timelines and outcomes for ODs.

Steven Kelly is a Vice President at Charles River Associates (CRA) with more than 20 years of experience working in health technology assessment, evidence-based medicine, health economics and pricing and market access within the pharmaceutical industry. He joined CRA in 2018 and has worked on a broad range of therapeutic areas throughout the lifecycle.

Ioanna Stefani is a Senior Associate at CRA with over five years’ experience in pricing and market access strategy in the life sciences industry. Her areas of expertise include launch readiness, innovative contracting and portfolio strategy projects specifically in haematology, oncology, orphan and autoimmune diseases.

Charlotte Poon is an Associate in the Life Sciences practice at CRA. She has worked on a range of projects for leading pharmaceutical and biotechnology companies and trade associations, focusing on complex strategic and policy challenges in the life sciences industry.

Nimisha Raj is a Consulting Associate in the Life Sciences Practice at CRA. Over recent years, she has worked on several strategic consulting projects for leading pharmaceutical and biotechnology companies, focusing on pricing and market access in Europe.