Since their debut, the range of applications for which deep ultra-violet (DUV) handheld devices are used in the pharmaceutical setting continues to grow. For pharmaceutical or biopharmaceutical cleaning verification, there is a requirement for a versatile and adaptive analytical and imaging device to demonstrate and document cleaning cycles. Here, Krishnakumar Chullipalliyalil and Michael McAuliffe demonstrate the versatility of DUV handheld devices for onsite cleaning verification applications as a potential replacement to existing methods. 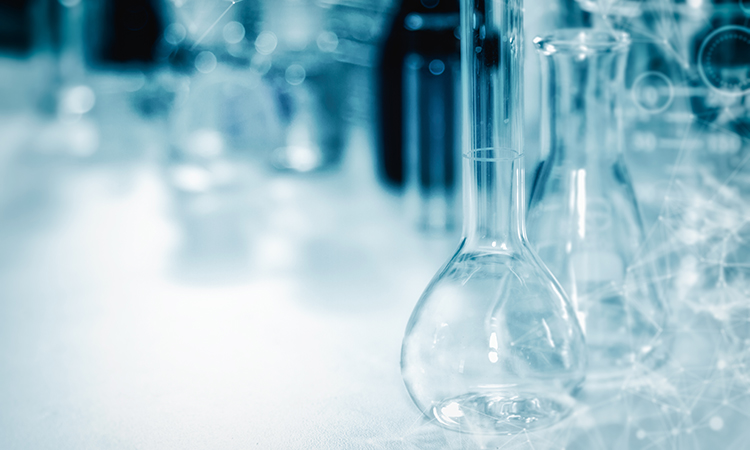 CLEANING VERIFICATION is a necessary process to avoid cross-contamination of the product with trace active ingredients that are “left out” after cleaning.1,2 Production downtimes due to cleaning cycles have been an issue in the pharmaceutical industry for a long time. The conventional analytical methodology employed throughout the pharmaceutical industry for cleaning verification is high-performance liquid chromatography (HPLC).3 HPLC has been the preferred method because it is highly specific, sensitive and quantitative. However, the technique’s main disadvantages are that it is time-consuming, costly and requires large volumes of solvents and mobile phases. These issues have two significant implications in the pharmaceutical manufacturing facility. First, total process capacity is reduced as production is stopped until acceptable residual limits have been validated, a process that can take up to two days with HPLC sample prep, analysis and data processing.4 Second, implemented cleaning processes are often based upon those previously utilised and lack an integrated scientific approach as HPLC cleaning verification does not foster a rapid and affordable systematic evaluation of a series of cleaning processes.5 Cleaning and verification cycles could run from hours to days if offsite testing methods are used. Swabbing of “shadowed” regions or hard-to-clean regions (those in the plant that cannot be visually assessed) makes cleaning verification after clean in place (CIP – cleaning without disassembling the equipment) difficult.

Consequently, innovative cleaning verification methodologies are needed to meet industrial demands for improved efficiency with reduced costs and environmental impact. Portable instruments to verify cleaning based on fluorescence, Raman scattering and infrared (IR) absorption have already been investigated and have proved to reduce production downtimes if used efficiently.

Light-induced fluorescence (LIF) is an advantageous analytical technique that is proposed as a valid alternative to HPLC for cleaning verification. This technique holds great potential as an in-line, at-line or standoff real‑time cleaning verification methodology. Portable instruments based on fluorescence detection that are already developed for cleaning verification purposes usually use broadband sources for excitation. Often, ultra-violet (UV) wavelengths are preferred for fluorescence excitation, since UV excitation can generate fluorescence from any sample, owing to the separation between excitation and emission (called Stokes shift) unlike visible or near IR wavelengths. Due to the Stokes shift, the physical phenomena in which the emission wavelength is longer than the excitation wavelength, LIF measurements are made over negligible backgrounds, providing a fluorescence advantage. Few developments have been made on DUV laser sources (source wavelength between 100-280nm) in the past decades, which slowed the developments in effective DUV portable instruments. Laser excitation in the DUV ensures that in addition to generating efficient fluorescence, the Raman signals generated are not dominated by fluorescence. The spectral separation between Raman and fluorescence upon DUV excitation enables the simultaneous measurement of resonance Raman and fluorescence for a range of pharmaceutical ingredients, adding to the chemical specificity.

The devices based on fluorescence used for cleaning validation can be categorised into these main genres:

Offsite devices are often used for validation of cleaning. In this case, the sampling is usually taken within the site of the inspection and the device – which is in a lab in the proximity of the site – measures the contamination in the sample taken, usually by swabbing. The swab then transferred into a diluent in a cuvette is then measured for its fluorescence. A typical example of this type would be portable lab spectrophotometers and fluorometers that have an external DUV light source such as an LED or a mercury lamp. A portable fluorometer would be an ideal example of this.6

Figure 1: simple schematic of the working principle of a portable fluorometer

Standoff or point and shoot devices 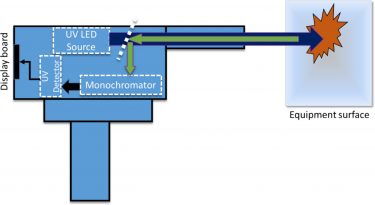 Figure 2: A schematic of the working principle of standoff fluorescence ‘gun’ detector

Point and shoot devices can work at a safe distance from the target. The “standoff” distance can vary anywhere between 0.5-30m. The main advantage is the reachability to shadow regions or hard to reach areas. They usually use an intense light source such as a laser or an LED for excitation. The disadvantage though would be the sensitivity. The problem with sensitivity arises either due to the lack of a more potent source or availability of the right wavelength of excitation, which leads to low chemical specificity. Such devices are optimally suited for detecting low concentrations of contamination, such as thin films of bacteria, proteins and other biochemical substances that are usually found on surfaces exposed to the environment where proximity of the personnel can be an issue. The residue of proteins and other substances exhibit fluorescence when excited under UV light. An example of such a device based on fluorescence is the TraC instrument developed by Photon Systems.7 TraC is a miniature handheld instrument for measuring trace chemical contaminants on surfaces, mainly focused on cleaning validation and process control for food or pharmaceutical product manufacturing. The achievable standoff for handheld fluorescence cleaning validation is reported to be 0.5-2cm with a sensitivity of 1µg/cm2.

Probe-based devices have a head that operates in much closer proximity to the sample, while keeping the measuring unit and the operator in a safe distance. The maximum separation between the area of inspection and the probe head (standoff distance) is limited in most cases. The significant advantage of this kind of device compared to point and shoot devices would be the higher sensitivity. It does have the additional advantage of reaching elusive areas, such as the inside of pipes and other small components. The use of a probe leveraging DUV excitation to verify cleaning in hard to cleanse areas would be an ideal mechanism for reducing production downtime in the pharmaceutical industry. Usually, light-emitting diodes are used as the sources of excitation for generating autofluorescence from the targeted sample.

Recently, a laser-induced fluorescence probe setup was reported, which demonstrated the detection and identification of active pharmaceutical ingredient (API) traces of concentrations as low as ≈0.02μg/cm2, even for API with extremely low fluorescence efficiency.8 Raman fingerprint detection along with fluorescence information provided by this instrument gives enough chemical specificity for identification between samples such as APIs, their intermediates, excipients and detergents. The probe can be inserted into pipes or other hard to reach areas and can operate between a standoff distance of 1-4cm.

Figure 4: Photograph of portable DUV cleaning verification probe unit (obtained with permission from Chullipalliyalil et al.). The fluorescence produced on a paper using the probe is seen in the last picture.8 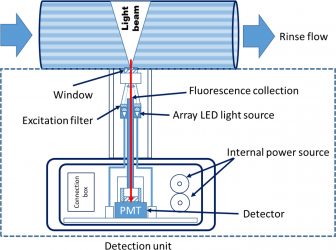 Figure 5: An example for the schematic of the LED  array-based LIF sensor for rinse monitoring drawn using the description provided in Dickens et al10,11

In fluorescence-based rinse analysis, the rinse after cleaning is measured at-line or in-line for understanding the amount of leftover trace detergent or API. Usually, a portable light-emitting diode (LED) array-based sensor for having low detection limits and significant response sensitivity is used for fluorescence-based online rinse systems.9-11 As the emission signal strength is directly correlated with incident excitation power, the dynamic control of the LED excitation energy allows for low detection limits, sufficient sensitivity and a wide dynamic range for most processes. The disadvantage of such systems involves their inability to target specific areas for cleaning verification. Since the result of the verification is based on the rinse solution from the equipment, rather than measured using a swab from a hard to reach area or measured directly using a point and shoot device, they provide average information of a general area rather than a specific site of inspection. Also, Raman scattering from liquid samples with low concentrations is not achievable with desired detection limits.

We have demonstrated the commonly used devices utilising DUV fluorescence for cleaning verification. By multiplexing spectroscopic techniques such as Raman and fluorescence, the potential of DUV handheld devices can be further enhanced. Additionally, imaging techniques can aid documentation of the cleaning process. In conclusion, handheld techniques make chemical and molecular analyses accessible for a broad range of applications in pharmaceutical research.

Dr Krishnakumar Chullipalliyalil is a Post-Doctoral Research Fellow in the Centre for Advanced Photonics & Process Analysis in Cork Institute of Technology. His main research focus is fluorescence spectroscopy instrumentation for process and analytical technology applications. He is currently working on deep UV Raman and fluorescence spectroscopy for pharmaceutical cleaning applications. His other research areas of interest include optical manipulation (optical trapping and imaging), high power laser applications (ablation and nonlinear measurements) and optical instrumentation.

Dr Michael McAuliffe is a Post-Doctoral Research Fellow in the Centre for Advanced Photonics and Process Analysis (CAPPA), Cork Institute of Technology and Tyndall National Institute. His research area is multidisciplinary, involving applications of molecular spectroscopy including hyperspectral imaging and multivariate analysis techniques applied to industrial applications. His future work involves the development of molecularly imprinted polymers coupled with SERS and microfluidic devices for the detection of high-potency active pharmaceutical ingredients (HPAPIs), drugs of abuse, water pollutants and key biomarkers present in the blood.