Antibody-drug conjugates (ADCs) are designed to be highly-targeted therapies with the potential to maximise the potency of a treatment while reducing unwanted side effects on healthy tissues. Some 20 years after the first ADC product approval, Dominik Schumacher and Jonas Helma-Smets of Tubulis GmbH discuss how improved and optimised technologies and components are supporting the next generation of ADCs. 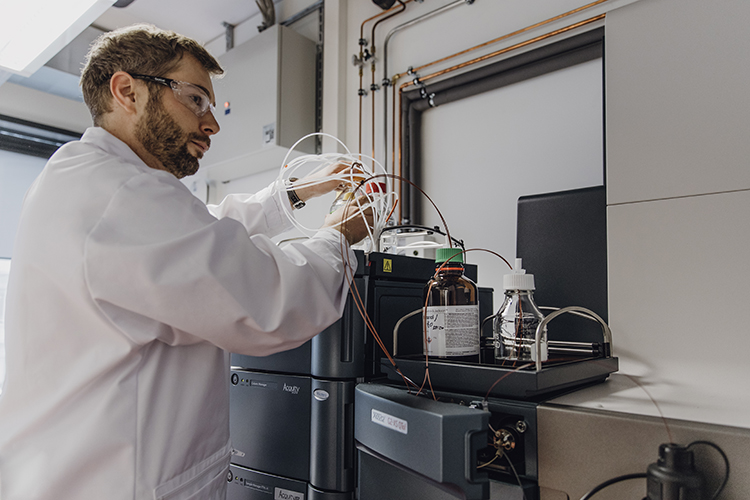 ANTIBODY-DRUG conjugates (ADCs) are therapeutic molecules designed as highly targeted medicines with the promise of changing the way we treat cancer and other diseases. An ADC combines the specificity of an antibody and the potent power of an anti‑cancer agent or disease-relevant toxin. In total, there are 14 approved ADCs on the global market, all for oncology indications, and over 140 ADCs currently in clinical development.1 While the first successes underscored the potential of this class of targeted therapies, they also revealed bottle‑necks inhibiting these first‑generation products from fully delivering on their initial promise. Early dose-limiting toxicities have prohibited the expansion of ADCs into larger and more complex tumour indications, dampening the initial hopes of a new “magic bullet” in the fight against cancer.

The fundamental basis of engineering ADCs is to conjugate specific antibodies, using a chemical linker, to a potent anti-cancer drug – often referred to as a cytotoxic payload in the context of ADCs. To engineer an ideal ADC, the drug must achieve a cohesive, molecular partnership between the cellular target, antibody, cytotoxic payload and chemical linker.2 The role of the antibody is to deliver the payload to a specific site such as a cancer cell. The antibody is chosen based on its high selectivity and affinity for the tumour-associated antigen and its ability to facilitate internalisation or endocytosis, wherein molecules such as proteins are engulfed by the cell membrane and drawn into the cell. The payload is selected with a mode of action tailored to the clinical indication and based on available chemistry that enables the stable attachment of the payload to the antibody at well-defined sites of conjugation in suitable stoichiometry (drug-to-antibody ratio; DAR).3 The linker is designed to have properties that physically connect the antibody and cytotoxic drug, and facilitate favourable pharmacokinetic behaviour in circulation, as well as controlled release of the cytotoxin once delivered. Functionality of ADCs is dependent on being internalised together with the target into the endosomal/lysosomal compartment, where the cytotoxin is released by controllable chemistry leading to the death of the cancer cell. The ultimate goal of the ADC concept is to maximise the potency of treatment and reduce unwanted side effects on healthy tissues.

The culmination of two decades of learning

there are 14 approved ADCs on the global market, all for oncology indications, and over 140 ADCs currently in clinical development”

More than 20 years ago, the first ADC, Mylotarg, was approved for use in patients with relapsed or refractory acute myeloid leukaemia (AML). Since then, the field has continued to evaluate and improve the individual ADC components: antibody, linker and payload. Early ADC developments centred on using cytotoxins with the highest potency together with limited linker designs. While this led to successful ADC product approvals, it became clear that the resulting narrow therapeutic windows hampered the use of the modality for broader targets and indications. Consequently the market dynamics were slow, with just three approved ADC drugs until 2017. Since then, the pace of approvals has increased in line with maturing technologies, resulting in 11 additional ADC approvals between 2017 and 2021. This development was enabled by a constantly evolving understanding of the interplay between the different ADC components and their relationship with disease biology. A striking example is the human epidermal growth factor receptor 2 (HER2) space,4 where Kadcyla (ado‑trastuzumab emtansine), an ADC with first generation conjugation chemistry and a tubulin inhibitor as payload (DM1), achieved approval, but it was only after a change in linker-payload chemistry that the true therapeutic possibilities were revealed with Enhertu (trastuzumab deruxtecan), an ADC carrying a high load of moderately potent Topoisomerase-I inhibitor, recently leading to a significant increase in efficacy up to a redefinition of treatable patient population. The increased ADC approval rate within recent years, alongside technological development, has ushered in a renaissance for this drug class with new technologies rising to the challenge. Despite this progress, there is still a need for improvement to facilitate the application of the ADC concept in other indications with different biologies.

Linkers – the crucial middle part of an ADC

A key aspect in removing many existing hurdles lies in the linker and conjugation of the two therapeutic modalities while maintaining the properties of the naked antibody. Payloads of ADCs that are currently on the market are either conjugated to the antibody’s amines or its cysteine residues. However, the chemistries involved generate heterogeneous mixtures with ADCs having different DARs and clearance properties, and the payload is often prematurely cleaved during systemic circulation. This results in reduced potency and increased toxicity, limiting the potential therapeutic window provided by ADCs. Choosing the right linker depends on a variety of considerations such as the degree of hydrophobicity derived from the payload, as well as its potency. Linker selection is a critical factor to ensure that the final ADC does not aggregate during circulation and comes with minimal target‑independent toxicities. Finally, existing platform conjugation chemistries are often restricted in their space of design and are, for instance, limited to a DAR of 2 or 4. As an example of the development in this area, the Tubulis platform can accommodate all of the above mentioned designs, ranging from ADCs having DAR 2 to DAR 4 with highly-potent payloads and even DAR 8 with moderately potent payloads such as Topoisomerase-I inhibitors (where a higher loading of the ADC could potentially improve the efficacious outcome of treatment).

Pushing the boundaries of ADC design

The next wave of ADC therapeutics will build on the development and clinical experience of the last 20 years as the field uses that knowledge to innovate on all aspects of the format, including target biology, linker design and payloads. While there has been a focus on generating site-specifically conjugated ADCs for a while and many ADCs that are currently entering the clinic are of homogeneous nature, there is a big trend around combining this with linkers that ensure ADC stability and offer improved toxicity profiles for patients. This has led to a surge in novel companies joining the ADC space, looking to find their niche in developing the next generation of ADCs.

Using the company’s proprietary P5 conjugation platform that employs a cysteine-specific conjugation method, Tubulis can generate highly stable molecules with high DARs without the need to engineer the antibody. This is based on ethynylphosphonamidates that prevent premature cleavage of the linker payload during circulation and increasing hydrophilicity of the ADC while keeping the distance between antibody and payload to a minimum.5 Thus, the antibody is able to protect the payload from unwanted interactions with circulating proteins and cells. Tubulis’ second technology platform is called Tub‑tag®, inspired by the unique features of microtubule biology and perfectly suited for DAR 2 and DAR 4 ADCs.6 The nature of the human-derived, recombinant Tub-tag peptide significantly stabilises the ADC product candidates by modulating the antibody to provide a highly beneficial microenvironment for the payload and preventing unwanted aggregation issues.7 A key differentiator of the company’s technology is that these platforms can engineer ADCs that reduce non-specific, target-independent toxicities in pre-clinical experiments, which potentially increases the drug’s tolerability for patients.

In order to create the next generation of protein-drug combinations and go beyond the classical toxic compounds that have defined the ADC field for decades, these novel conjugation technologies will be key. The breadth of these new technologies, including the ones we are developing at Tubulis, will open completely new possibilities. A critical aspect here will be to understand the biology and underlying pathophysiology of a specific disease to create novel protein-drug combinations.

The future of the ADC approach looks bright

The significant momentum generated in the field has led to several companies advancing into the clinic, with new drug candidates, biotechnology and pharmaceutical companies forging ahead with clinical trials at various stages, company buy-outs, venture capital investments and near-term approval hopefuls. This excitement will surely propel a next generation of ADCs to patients in cancer indications with a high medical need that are currently not well served with standard of care. This new era of ADC development will show the true colours of this drug class and the promise it holds in oncology and beyond.

Dominik Schumacher, PhD is the CEO and Co-founder of Tubulis. In 2019, he was recognised as one of MIT’s Innovators under 35 and has contributed to Tubulis receiving several prestigious start-up awards. Prior to co-founding Tubulis in 2018, Dominik worked as a group leader at the Ludwig Maximillian University (LMU) in Munich. Dominik is a graduate of the Humboldt University of Berlin and Heinrich Heine University in Dusseldorf.

Jonas Helma-Smets, PhD is the Chief Scientific Officer and Co-founder of Tubulis. Prior to his role at Tubulis, Jonas gained 10 years of field experience, deepening his knowledge of biotechnology and antibody engineering. He also co-founded ChromoTek GmbH, a company focused on developing nanobody derivatives for proteome analysis and cell-based diagnostics. Jonas is a graduate of the Ludwig-Maximilians University (LMU) in Munich.