Currently the best known example is hERG inhibition, which is strongly implicated in QT prolongation and can result in the potentially fatal type of arrhythmia, Torsades de Pointes, which has been one of the main causes of drug withdrawal in recent years2. Several other examples exist, such as fenfluramine (Pondimin®) and dexfenfluramine (Redux®) which were withdrawn from the market due to cases of valvular heart disease potentially linked with a secondary activity on the serotonin 5HT2B receptor3. Another somewhat different example is phencyclidine (PCP- Sernyl®). This drug was initially used as an anaesthetic agent but withdrawn from the market because of adverse psychotic (schizophrenia-like) effects. These effects have been linked partly with its first mechanism of action as a non-competitive N-methyl-D-aspartate (NMDA) receptor antagonist, but also to a considerable pharmacological promiscuity affecting monoamine transporters, the cholinergic system, the sigma and opioid receptors and ion channels4. Many other well characterised mechanisms of action can explain ADRs of any compound and these mechanisms can be screened at early drug discovery stage using cost effective, high throughput in vitro assays.

Even though some, essentially CNS, drugs are known for their lack of selectivity (antipsychotic, antidepressants)5, it is generally well recognised that a new chemical entity should be as selective as possible in order to avoid or reduce any potential side effects. Most drug discovery project teams aim for a therapeutic window of at least 100-fold when considering the in vitro activities of a compound for its target of interest versus all other targets. However, traditionally, the evaluation of these off-target effects has been limited to the closest neighbours of the target of interest. As an extreme, but common, example a kinase program would rarely integrate any GPCR testing at the lead discovery stage and vice versa. Broader off-target screening would most usually be performed only at a very late stage of the drug discovery process (if at all), when a huge effort and cost has already been invested. At this stage, it is too late to change anything without considerable delays and the project would therefore either stop or continue with a much higher risk of failure.

At Novartis, a centralised ‘in vitro safety pharmacology profiling group’ has been implemented with the mission to predict potential adverse effects of compounds starting at the lead-finding stage of drug discovery. A broad panel of 70 in vitro binding assays has been implemented, each target of the panel being related to one or several well known adverse effects. A large part of this panel consists of well known GPCRs, but ion channels, transporters and a few enzymes are also represented6. The strategy of assay design considers that the tests should be simple, fast and predictive for ADRs. This explains the use of radioligand binding assays, even though they do not determine functionality. The binding or enzyme inhibition assays have the advantage of being easily miniaturised, fully automated (homogenous technologies such as SPA, HTRF and FP are preferred) and robust for a low cost per data point. Human targets are preferred as we are aiming to determine clinical ADRs and some targets may differ between species. Even if the prediction of in vivo effects from in vitro profiles remains a challenge, the Bioprint6 and Biospectra7 approaches have demonstrated the use of large in vitro profiles to predict in vivo effects.

To ensure a rapid turnaround time and to increase the quality of the data, direct IC50 determinations with 11 concentrations per compound are performed. A number of quality controls, including a minimum of one reference compound per assay, Z’ value, duplicate checks, curve fitting parameters and percentage of radioligand bound, are evaluated with each experiment.

This ‘in vitro Safety Pharmacology Profile’ is used as an initial screen during hit and lead selection and early optimisation (Figure 1). The results of this initial screen contribute to the selection of the best chemical series and dictates how often a program should re-screen compounds during lead optimisation. Before taking any decision, a number of representatives of a chemical series (e.g. 5 to 10) must be profiled in order to confirm that the off-target activity is linked with the core group of this series and not to a particular side chain. If a compound hits a particular unwanted target, that target may need to be incorporated into the program-specific profiling flow chart as a liability to be addressed regularly. If the initial screen is ‘clean’, the ’in vitro Safety Pharmacology Profile‘ needs only to be used as a spot check, at certain decision points or if a major chemical change is made. An even broader study of the selectivity of the compounds is outsourced at a later stage as a final check. It is recommended that the lack of selectivity of a chemical series for a number of other targets is not necessarily a sufficient criterion to stop its optimisation. This decision is highly dependent on other factors such as the clinical indication and availability of other structures with better developmental prospects.

This report is based on the analysis of 1600 compounds that were tested in 67 binding assays. These compounds originated from the Disease Areas of Novartis and represent compounds with considerable structural diversity from about 80 individual projects. Firstly, we analysed the target hit rate to reveal the level of promiscuity of this compound collection. Figure 2 shows the target hit rate (percentage of targets hit by a compound with an IC50 lower than the given cut off). More than 20% of the compounds showed activity at lower than 5µM IC50 at 10 to 20% of the targets of the panel (i.e. 7 to 14 targets).

The numbers showing a high level of promiscuity are biased because those projects that encounter high levels of hit rate will send more compounds for testing in the in vitro safety pharmacology panel. Nevertheless, these data emphasise that promiscuity is a common feature of compounds, particularly during early phases of drug discovery. One reason for this could be that promiscuous compounds, by their very nature, will be more prevalent among hits identified through high throughput screening (HTS), whereas selective compounds for the target in question will be scarcer. Promiscuity on its own might not be a ‘red flag’ for drug discovery projects, as the therapeutic window may still be acceptable for the particular indication, or even some promiscuity may be desirable (see psychotomimetics). However, in general terms the more targets the compound hits, the higher the risk of producing ADRs in the clinic. To minimise promiscuity is not a trivial undertaking and may result in a prolonged discovery phase. The more promiscuous the scaffolds, the more difficult it will be to fix the problem, and there is a good chance that activity at the primary target will be lost as well. It is certainly better to start with an inherently less promiscuous scaffold if at all possible.

Reasonable pharmacological selectivity for the primary therapeutic target is one important criterion to reduce the risk associated with ADRs. We found in our analysis that a significant proportion of the chemical series synthesised during various drug discovery phases (and most often derived from HTS) show low selectivity in a panel of pharmacological assays focused on safety. ‘in vitro Safety Pharmacology’ is therefore an important tool to integrate early into the drug discovery phase8-9.

The general rule seems to apply that compounds with low molecular weight, low Log P, a small number of ring systems and preferentially with the presence of a carboxylic acid moiety reduce the chance of promiscuity (at least at the panel of targets considered in this study). Most of these criteria are compatible with Lipinski’s ’rule of five‘ for good absorption. Starting from these findings it should be possible to design an in silico model predictive for the promiscuity of compounds at our selected set of targets. Selectivity could then be predicted, to some extent, at hit selection, before synthesis or before the purchase of new compound libraries. 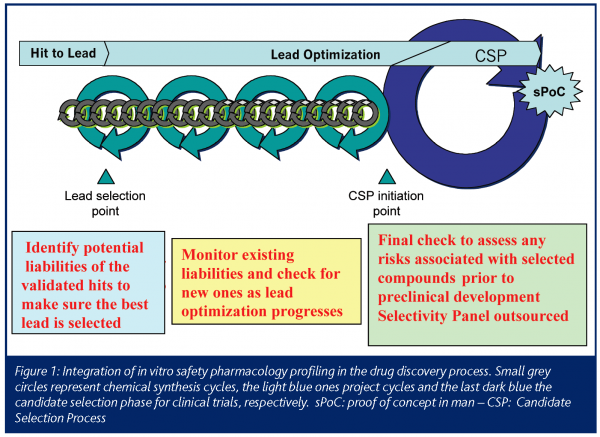 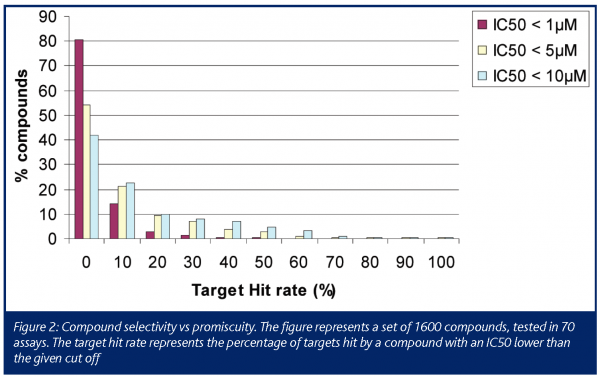 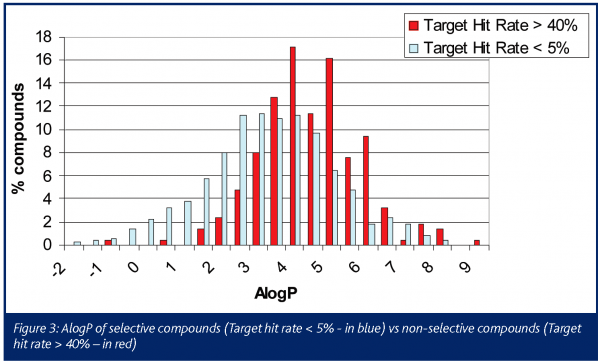 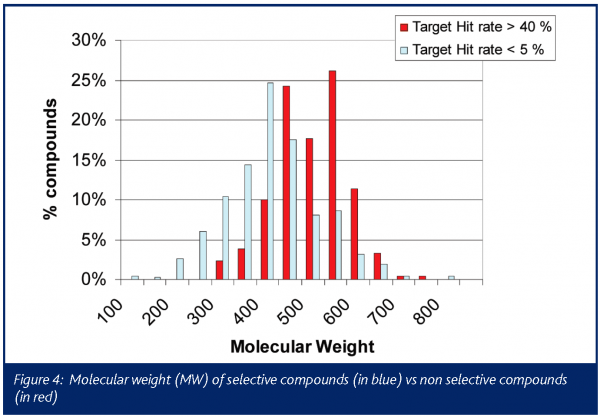 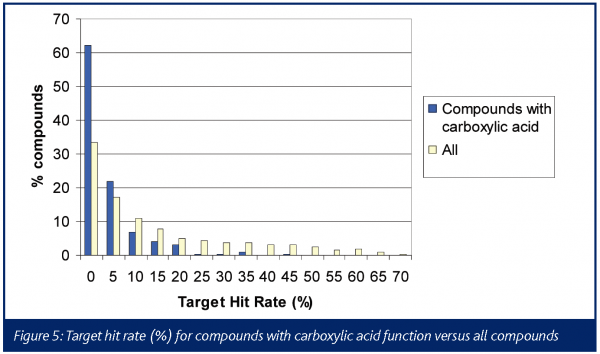