The promise of pancreatic beta cells

In the pharmaceutical arena biomarkers now provide informed Go/No Go project decisions that should enhance the effective delivery of pharmaceuticals to the market. The increasing incidence of diabetes not only heightens demands for improved therapeutics, but also begs a better definition of the disease through physiologically relevant, non-invasive biomarkers.

Clinical measurement of pancreatic beta cell function and mass (BCM) will provide valuable diagnostic and therapeutic information for diabetes onset and treatment. As a dynamic cell type that secretes insulin upon monitoring glucose levels, the beta cell may change its mass and number to accommodate perceived systemic changes1,2. Estimates of 90% beta cell loss are thought to lead to abnormal blood levels of glucose, glucagons or insulin in type 1 or type 2 diabetes patients, but such measurements come largely from animal models. Since the total number of human beta cells is estimated at 106, monitoring mass and functional capacity changes are difficult challenges in an organ with 99% other cell types3,4. There are multiple, rapidly evolving approaches to overcome this challenge that all seek direct in vivo beta cell quantitation for future success in the clinic. A workshop in 2003, ’Imaging the Pancreatic β Cell‘, sponsored by the National Institute of Biomedical Imaging and Bioengineering, the National Institute of Diabetes, Digestive and Kidney Diseases and the Juvenile Diabetes Research Foundation International, focused on these emerging efforts to develop novel ways of imaging beta cells in vivo (See (http://www.nibib.nih.gov/events/BetaCell2003/BetaCell2003_FinalReport.pdf). Current approaches and technologies will be discussed with an emphasis on those with potential for success.

The approaches to beta cell detection in vivo can be categorised into small molecular probe design and the identification of beta cell-specific surface proteins selective for the beta cell (See Table 1). As these approaches meld to provide a better functional and molecular description of the beta cell, successful clinical applications should follow.

Imaging technologies currently proposed for in vivo application include positron emission tomography (PET) and magnetic resonance imaging (MRI) techniques7,9. Critical for both technologies are probe specificity and the ability to accumulate in beta cells to provide the desired signal to noise ratio.

For PET probes, a number of small molecules with known beta cell specificity have been utilised, including secretory granule accumulators and insulin secretagogues (Table 1). Given some success thus far, D-mannoheptulose labeled with 11C, 18F or 125I may yet provide a sufficient signal to monitor the endocrine pancreas5 since experiments in rodents indicate that liver and transplanted islets accumulated more than the pancreatic gland6. In addition, glucose (18Fluoro-deoxy glucose or 18FDG) would appear to be a possible candidate for an accumulated marker, but studies in humans have thus far provided no discernable signal in the pancreatic gland beyond the background5. Also, despite exhibiting some specificity for beta cells, 18F-dithizone fell short of the desired specificity ratios for detection (signal:noise in vitro and in vivo, see reference 7).

PET probes based on the therapeutic secretagogues specific for sulfonyluea receptors 1 and 2 (SUR 1, 2) have also been utilised in vivo8,9. SUR 1 receptor density is high in beta cells, while SUR 2 density is high in cardiac, skeletal and smooth muscle. Fluorinated derivatives of the SUR ligands glyburide and tolbutamide have been tested as beta cell imaging agents8,9. Biodistribution studies of these analogs in mice, rats and humans, however, resulted in high liver and small intestine content but relatively little in the pancreas. The high liver background and the low pancreas uptake of the probes again led to the common problem of imaging the pancreas beyond the background of the liver. Repaglinide, a non-sulfonylurea with preferential SUR 1 affinity, may prove valuable for overcoming this problem for beta cell imaging since it has an IC50 of 5nM and exhibits less uptake in liver when compared to a glyburide analog. Also, repaglinide is metabolised to inactive constituents by the liver, resulting in less apparent liver content in rats while rapidly accumulating in the pancreas in 10 to 30 minutes. In vivo assessment is ongoing with repaglinide and its methoxy/ethoxy derivatives labeled with C-1110. Despite the spatial resolution limits of PET (~ 5mm) compared to actual islet size (50 – 300 μm) and the given background issues, PET probes may still hold promise for small molecule detection of BCM.

For MRI probes the application to beta cell detection in vivo is earlier in development. Mn2+ can substitute for Ca2+ in glucose-dependent flux in beta cells and accumulate to provide a glucose concentration-dependent increase in MR signal in rat pancreatic islets ex vivo11. Very high concentrations of Mn2+ are required for this signal, but the concept of Ca2+ ion substitutes may lead to further work with Mn2+ complexes that are transported by beta cell calcium channels12. Notably, the emerging field of paramagnetic agents with chemical exchange saturation transfer capabilities (Aka PARACREST) for tissue metabolites, such as glucose, may allow future probe design to allow functional imaging13.

Due to the autoimmune nature of type 1 diabetes and the presence of circulating antibodies against islets, the search for antibodies against beta cell surface proteins has claimed many followers. While T-cell responses most probably dictate beta cell destruction, antibodies are produced against beta cell proteins but only later in disease onset. One such approach at isolating an antibody resulted in an IgM monoclonal antibody (IC-2) against a beta cell surface component14. Using IC-2 labeled with DTPA-111In, Moore, et al, were able to inject the probe and, 24 hrs later, quantitate the difference in incorporation of 111In between normal and diabetic pancreata ex vivo15,16. Although the IC-2 antibody has inherent liabilities for further development as a probe (e.g. IgM size, background imaging, pharmacokinetic and antigen identification issues), the experiment did showcase the potential for specific imaging of beta cells with such an approach. Perhaps other surface-directed antibodies would provide better probes. There is an ongoing concerted effort at the Antibody Core facility at the Beta Cell Biology Consortium (BCBC at www.betacell.org) to produce similar antibodies. Complementing this effort are the Functional Genomic Group at the BCBC (U. Penn) and the U. Penn Computational Biology and Informatics Laboratory. Thus far, through their efforts, some 70 mRNAs for potential surface proteins have been identified that are common to mouse and human beta cells and are now being expressed to produce antibodies17. At the least this approach will identify those surface molecules to be targeted with antibodies, but it may also allow the use of labeled small peptides or drugs specific for these beta cell molecules in the future.

Numerous problems are inherent in quantitating beta cell mass and function. As mentioned, the number of total beta cells is small relative to the background of the pancreas and in type 1 or 2 diabetes this number is even smaller. Add to this the desire to have optimal pharmacokinetics, diffusion characteristics and detection beyond liver background and the problem seems ponderous. Successes thus far have been only piecemeal. Labeled D-mannoheptulose can accumulate in the islets but also accumulates in the liver. Labeled sulfonyluea secretagogues can accumulate in the beta cells, but again the liver background is problematic. A labeled antibody, IC-2, can be delivered in vivo for beta cell labeling and imaging ex vivo, indicating the technique may prove fruitful if peptides or small molecules can be used to tag such surface molecules in the future. Perhaps the most promising probe so far in this current window of beta cell biomarker development is the application of C-11-labeled repaglinide because it accumulates in the beta cells and may provide a reduced liver background when compared to other SUR-specific ligands. The inherent signal to noise issue must be approached carefully. Sweet et al18 have now calculated that a PET probe must be retained 1000-fold more effectively than in the exocrine cells of the pancreas and that the desired surface labeling should not be confounded by extracellular labeling. These criteria can then be used for defining inherent limitations prior to actual experiments.

The combination of the results from these initial attempts may provide the necessary inroads in understanding the proper technology to produce an effective biomarker for beta cell quantitation. At least some of the criteria for beta cell detection have now been established. 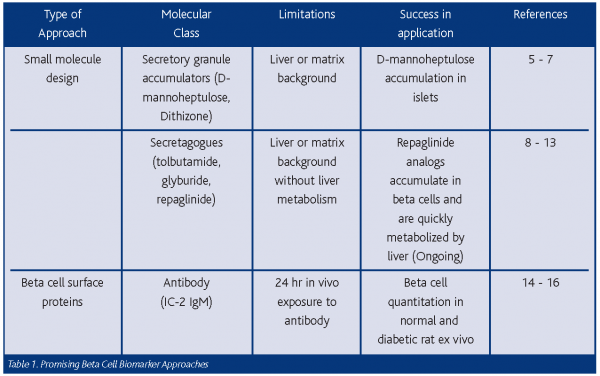