High-performance liquid chromatography (HPLC) is a powerful separation technique due to its high accuracy, precision, versatility and robustness. In the development of pharmaceuticals, it is no doubt that LC is a key technology in the quality control of pharmaceuticals and pharmacokinetic studies and in the analysis of complex biological compounds in bio-samples for the clarification of the function of biological systems. Nowadays, pharmaceutical developments require that HPLC analyses are fast and efficient. 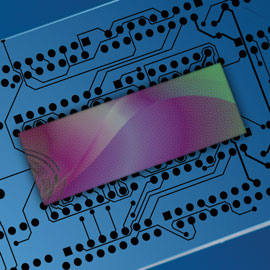 However, reducing separation times in LC without reducing the separation efficiency requires generating higher resolving power per unit time while speeding separation times without lessening the quality of the separation enables important analytical information to be generated more quickly. To achieve these goals in LC, monolithic column, high-temperature LC, fused-core column and ultra high-pressure LC with sub-2µm particles packed into column have been developed. This review will focus on chip-based pressure-driven LC separation.

In pharmaceutical analysis, it is not just faster and more efficient LC separation that is important, but the automation of the entire analytical process. Recently, micro-total analysis system (microTAS), also called lab-on-a-chip, has been an attractive research area. In microTAS, sampling, sample transport, any necessary chemical reactions and chromatographic separations as well as detection are automatically carried out on a chip1, and separation is one of the important procedures associated with microTAS. Hence, extensive studies have been conducted for achieving on-chip separation. The miniaturised separation procedure provides very fast analysis, which enables high-throughput analysis, very small sample volumes, and low reagent consumption.

Most research efforts have focused on electrophoresis and electro-driven chromatography for on-chip separation2. There are relatively few examples of chip-based LC compared with chip-based electrophoresis and electro-driven chromatography. It should be noted that nano LC or capillary LC, which use a very small diameter of capillary packed with particles in the column, is also considered as miniaturisation of LC. Four kinds of approaches, open tubular chromatography, particle-packed, monoliths, and pillar array columns, have been developed (Figure 1). 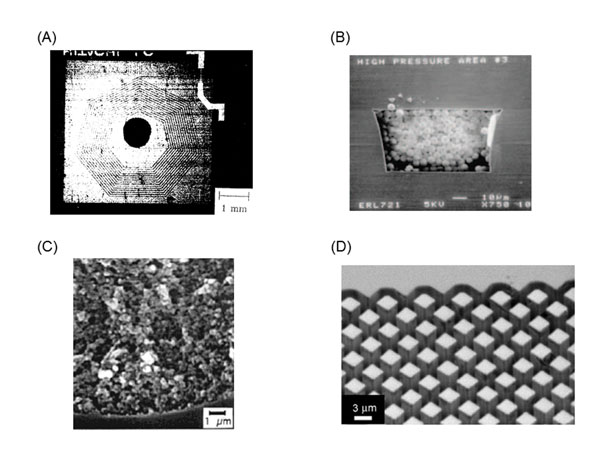 Open tubular chromatography is the simplest way to perform chromatography on a chip. Actually, this approach was carried out as the first example of on-chip LC. In 1990, Manz et al. fabricated an open tubular column with the length of 15cm, width of 6µm, and depth of 2µm, but no separation was performed3.

The channel wall of the chip is used as the stationary phase after direct modification to yield the desired retentive ability. Even though back pressure is low, the main disadvantage is the low capacity of the column due to the low surface-to-volume-ratio.

The second approach involves the use of particles. In conventional LC, most columns used are particle-packed columns, but this approach transfers the conventional method to microfluidic chip. Many techniques have been studied and are available, but on-chip LC packed with particles is one of the more straightforward methods. Actually, particle-packed LC chips are commercially-available by some companies, but are only used for specific equipment, especially for connecting with a mass spectrometer. This is simply because dead volumes due to the connections of the column and the detector need to be eliminated.

A system comprises an on-chip microvalve, an enrichment column, a particle-packed analytical column, and a nanospray emitter on a single multilayer polyimide chip4. Commercially-available LC devices with particle-packed columns have been extensively utilised for proteome research, and have also been used for the analysis of small molecules, such as 7-aminoflunitrazepam in human urine, 8-isoprostaglandin F2α in human urine, hepcidin, a peptide marker of clinical disorders linked to iron metabolism, in human plasma, different pharmaceutical drugs covering a wide range of hydrophilicity, fluoxetine and norfluoxetine in rat serum, abused drugs and metabolites in human hair, and 7-ethyl-10-hydroxycamptothecin (SN38) in mouse plasma.

It is known that LC performance depends critically on packing conditions of spherical particles. As the chip channels are not cylindrical as in the conventional LC column and applied pressure for the packing is limited, it is not easy to achieve the same packing as in the conventional LC columns. Some studies showed that, for the particle-packed chip LC column, high bed densities are critical to separation performance in noncylindrical packed beds5, and that the desired high packing densities can be much more easily achieved using 3μm packings than with 5μm particles6.

The third method is the use of monoliths. Monoliths consist of a single rod of porous material with several unique features in terms of permeability and efficiency. Synthesising the silica or polymer-based monolithic column in situ is the main advantage. Solution containing monomers and functional groups can be introduced in microchannels, thermally or via photo-induced polymerisation, resulting in a highly porous material. Ericson et al. first demonstrated anion-exchange chromatography of proteins by filling the narrow channels with continuous polymer beds7. Considering the practical uses, the main disadvantage is the column-to-column reproducibility.

Last but not least, pillar array column can also achieve LC separation on a chip. Before introducing the pillar array columns, I will start with explaining the theoretical aspects of LC. According to Giddings’s theory, three processes contribute to band dispersion, and plate height can be expressed as a sum of three terms. Reduced plate height depends on the reduced velocity as in the equation:

where A, B, and C are constants, h is the reduced plate height (plate height divided by dp, particle diameter of packed materials), and v is the reduced velocity (expressed as udp/Dm, where u is the mean linear velocity of mobile phase, and Dm is the diffusion coefficient of the analyte in the mobile phase)8. A, B, and C terms relate to flow in interparticle spaces, axial diffusion, and slow equilibration between mobile and stationary phases, respectively. Knox pointed out that A-term dispersion is by far the most important, and that there is a limitation of particle-packed column due to packing technology9. He also stated that much lower h values could be obtained by decreasing the A-term dispersion if the stationary phase were made entirely ordered, for example by micromachining the entire column.

This was realised by Regnier et al. in 199810. They reported that in situ micromachining can be used to simultaneously position and define (i) support particles, (ii) convective transport channels, (iii) an inlet distribution network of channels, and (iv) outlet channels in multiple chromatography columns on a single quartz wafer to the level of a few tenths of a micrometer. However, this column was evaluated only for electro-driven chromatography.

The first successful pressure-driven LC separations using a microfabricated column based on pillar-arrays was reported by Desmet et al.11 In this study, the columns, which were formed by arrays of nonporous silicon pillars with a diameter of approximately 4.3μm, were fabricated, and the pillars were covalenty coated with a monolayer of hydrophobic C8-chains to enable reversed-phase LC separations. The separation of three dyes was enabled in three seconds. Plate heights of approximately 4μm, whose value was much lower than that of conventional LC columns, were obtained under weakly retained conditions. This clearly showed that the ordered structure of the stationary phase can enhance the separation performance of a column.

Fluorescently-labelled BCAAs were separated in 100s13. With the help of an internal standard, the concentrations of BCAAs in a sports drink and human plasma samples were quantitatively determined. This study showed that pillar array columns could be used for fast analysis of biological compounds in bio-samples. To increase the retention of nonporous pillar array columns, pillars with thick layers of mesoporous silicon were produced.

Among the four kinds of approaches: open tubular chromatography, particle-packed, monoliths, and pillar array columns, I believe that pillar array columns provide the most efficient separation. As mentioned above, the on-chip chromatographic technique has great potential for pharmaceutical analysis. To realise the microTAS, each unit should be developed, and it is necessary to integrate sample preparation, separation, and detection. Sample preparation is an essential part of most analytical methods, especially in bioanalysis, and is the most difficult work at the micro level. Sample preparation involves dialysis, sample preconcentration, liquid-liquid extraction, solid-phase extraction, and derivatisation of the analyte. Detection is also a challenging task for microTAS because very sensitive detection techniques are necessary as a consequence of very small sample volumes used in microsystems. However, sensitive detection methods, such as laser-induced fluorescence microscopy and mass spectrometry, are already available. In the near future, microTAS with LC will become a new reality in pharmaceutical analysis.

Makoto Tsunoda obtained a PhD from the Graduate School of Pharmaceutical Sciences, University of Tokyo in Tokyo, Japan. After graduation, he worked as a postdoctoral research fellow at Ames Laboratory, Iowa, USA. He is currently an associate professor at University of Tokyo where his research interest is in on-chip liquid chromatographic separation techniques and development of bioanalytical systems for biological compounds. He has written over 70 peer-reviewed papers and three book chapters.

If you enjoyed this article, check out more our archive of Chromatography articles. 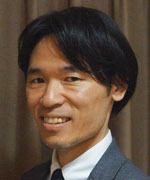 By Makoto Tsunoda (University of Tokyo)