Researchers using 4D printing have developed microneedles with backwards-facing barbs that they suggest could replace hypodermic needles in prolonged drug delivery or biosensing in future. 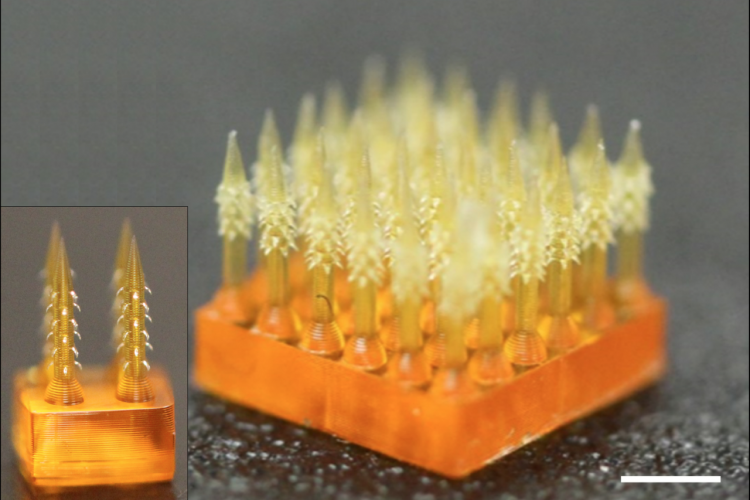 Scientists have four dimensionally (4D) printed microneedles that use backwards-facing barbs to aid tissue adhesion which, according to the study, results in more stable and robust drug delivery, collection of bio-fluids and biosensing. The team suggest their creation could replace hypodermic needles in the future.

…researchers developed their needles with inspiration from insect stingers and hooks; designing it with backwards-facing barbs”

4D printing, according to the researchers, uses smart materials that change shape after printing in accordance with their programming to create a final product. In this study, published in Advanced Functional Materials, this technique was used to create miniaturised needles, called microneedles, which are designed to be minimally invasive to reduce the pain and risk of infection associated with injections.

“We think our 4D-printed microneedle array will allow for more robust and sustained use of minimally invasive, pain-free and easy-to-use microneedles for delivering drugs, healing wounds, biosensing and other soft tissue applications,” said senior author Howon Lee, assistant professor in the Department of Mechanical and Aerospace Engineering at the School of Engineering, Rutgers University – New Brunswick, US.

Microneedles are an attractive option but, according to this team, weak adhesion to tissues means they are not optimised for controlled drug delivery or biosensing over extended periods. In this study, the researchers developed their needles with inspiration from insect stingers and hooks; designing it with backwards-facing barbs that allowed it to adhere to tissue 18 times more strongly than barbless microneedles.

They suggest this platform could be further developed for more stable and robust drug delivery, collection of bio-fluids and biosensing in future.