DNA nanostructure stabilisation could enable translation into clinical use

Stabilising DNA nanostructures using glutaraldehyde to tether an electrostatic PEGylated oligolysine net to the DNA enabled them to survive degradation in animal models. 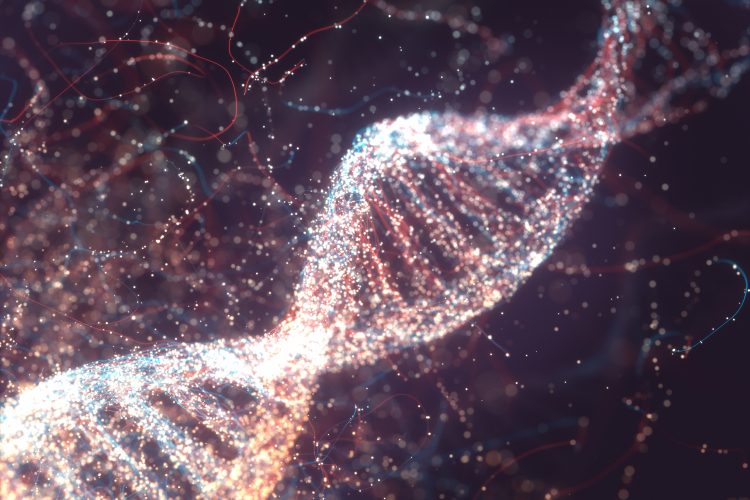 Researchers exploring how DNA nanostructures can be stabilised, enabling them to act as vehicles for drug delivery, have discovered a method through which they suggest these nanocarriers may be translated into clinical applications.

According to researchers, one of the major downfalls of using DNA nanostructures as drug delivery vehicles or diagnostic sensors is how liable they are to breakdown in vivo. A typical method used to stabilise self-assembling DNA origami structures is with magnesium ions, which can neutralise the negative charges on DNA that cause it to repel itself when self-assembling into a nanostructure. However, magnesium ions leak from these structures when they enter living tissue and the nanostructure disintegrates.

“To help fulfil the extraordinary promise of DNA nanostructures, we developed a broadly applicable chemical approach to boost their resistance to degradation,” said Dr William Shih, a Core Faculty member at Harvard University’s Wyss Institute, US, who is leading the project in the Institute’s Molecular Robotics Initiative. “By modifying DNA nanostructures in two easy steps, we can dramatically enhance their survival, which removes a central bottle-neck in the translation of those nanodevices into solutions to a variety of medical problems.”

In a previous study, Shih’s team showed that coating the DNA strands with PEGylated oligolysine (PEG-oligolysine) increased their resistance to degradation. PEG-oligolysine consists of short chains of the positively charged amino acid lysine which can neutralise many exposed negative charges on the DNA. They say the PEG-oligolysine coating forms an electrostatic net over the DNA, stabilising the nanostructures in both living cells and mice.

“Using this simple strategy, we could extend the survival of DNA nanostructures by about 400-fold with half-lives up to 36 hours in physiological environments that also contained normal nuclease levels,” said study first-author Dr Frances Anastassacos, who at the time of the study was a graduate student working with Shih. “However, this still fell short of what is needed in some actual therapeutic applications. PEG-oligolysine still tended to fall off the DNA to some degree.”

“We essentially tied additional knots into the electrostatic net using a chemical cross-linking reagent known as ‘glutaraldehyde’ that strongly bonds distinct PEG-oligolysines on the surface of DNA nanostructures,” said Anastassacos. “In the presence of DNA nuclease levels that far exceed those in the human body, their survival extended beyond 300 hours. The 400-fold increase in stability that we observed with PEG-oligolysine alone was elevated by another 250-fold, which hits the mark for clinical applications.” 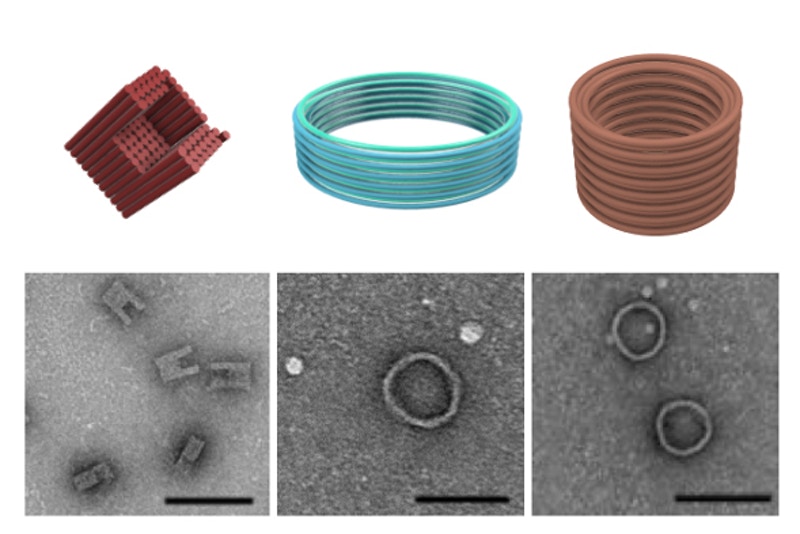 The researchers assembled three distinct DNA nanostructures, including a C-shape and two barrel-like structures and showed by Transmission Electron Microscopy that they were protected by their combined coating and cross-linking strategy (credit: Wyss Institute at Harvard University).

Dr Zhao Zhao, co-first author and former Postdoctoral Fellow on Shih’s team, highlighted that unlike other approaches which alter existing three-dimensional (3D) structures, their technique can be performed on “any DNA nanostructure and its ease and cost-effectiveness could significantly strengthen the translation of many already existing and newly designed therapeutic and diagnostic structures.”

The researchers suggest that DNA strands coated with PEG-oligolysine and tethered with glutaraldehyde cross-links can now be translated into clinical applications.

The study was published in Journal of the American Chemical Society (JACS).