Researchers have developed a novel sensor, known as a time-temperature indicator, that could be used to monitor the storage conditions of mRNA vaccines. 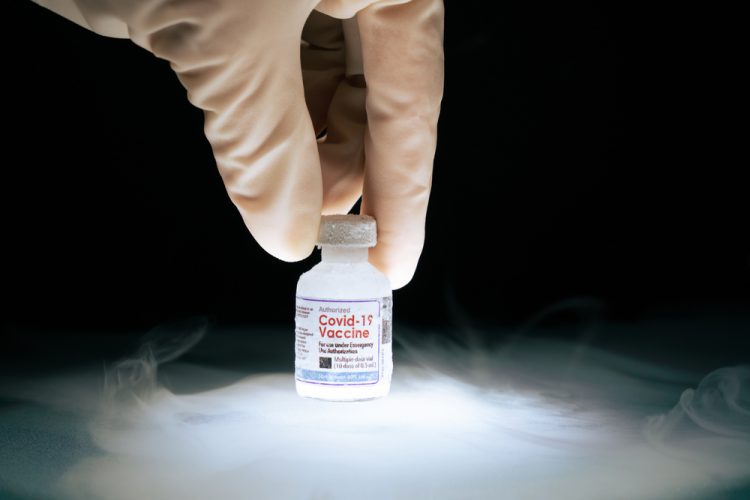 Scientists have developed a new tamper-proof temperature indicator that could be applied to COVID-19 vaccine vials and used to alert healthcare personnel when a vaccine has reached an unsafe temperature for a certain period. According to the developers of the sensor, the technology could help ensure distribution of effective messenger RNA (mRNA) vaccines, which require stringent temperature controls during shipping.

The mRNA vaccines for COVID-19 encode the genetic sequence of the SARS-CoV-2 spike (S) protein. They deliver this to cells in the body, which temporarily produce the protein, inducing an immune response. While proven to be highly effective thus far, mRNA is known for its instability and therefore these vaccines require cold and ultracold storage and transport conditions (in the case of Pfizer’s and BioNTech’s Comirnaty®, between -70 and -90°C) for the vaccines to remain effective. Sung Yeon Hwang, Dongyeop Oh, Jeyoung Park and colleagues from the Research Center for Bio-based Chemistry at the Korea Research Institute of Chemical Technology (KRICT) wanted to develop a time-temperature indicator (TTI) to identify mRNA vaccines that are exposed to undesirable temperatures during storage or transport, so that they could be discarded. 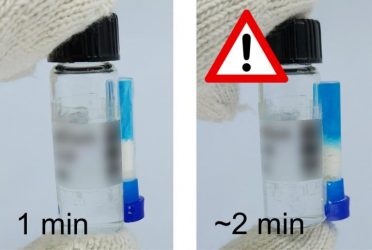 When the temperature of a glass vial containing simulated vaccine rises above -60°C for longer than two minutes, a blue dye in an adjacent tube diffuses into a white absorbent, leaving an irreversible colour trace [Credit: Adapted from ACS Omega 2021, DOI: 10.1021/acsomega.1c00404].

To make their TTI, the researchers added a mixture of ethylene glycol (anti-freeze), water and blue dye to a small tube and froze it in liquid nitrogen. Then they added a white cellulose absorbent to the top of the frozen coolant, turned the tube upside down and adhered it to a larger glass vial containing simulated vaccine at -70°C. At temperatures above -60°C, the antifreeze mixture melted and the dye diffused into the white absorbent, turning it light blue. The colour change was evident as little as two minutes after the simulated vaccine was exposed to a higher temperature. Importantly, exposures of less than two minutes, which are unlikely to impair vaccine efficacy, did not turn the TTI blue. The colour change persisted even if the tube was refrozen at -70°C, making the system tamper-proof.

In addition, the researchers suggested that changing the coolants or their mixing ration, or by using different absorbents, the TTI could be tailored to monitor the ideal storage conditions of different mRNA vaccines.

Their research was published in ACS Omega.

Machine learning boosts spirulina bioproduction by up to 100 percent