An in silico trial evaluating a flow diverter in the treatment of brain aneurysms simulated the results of three human clinical trials. 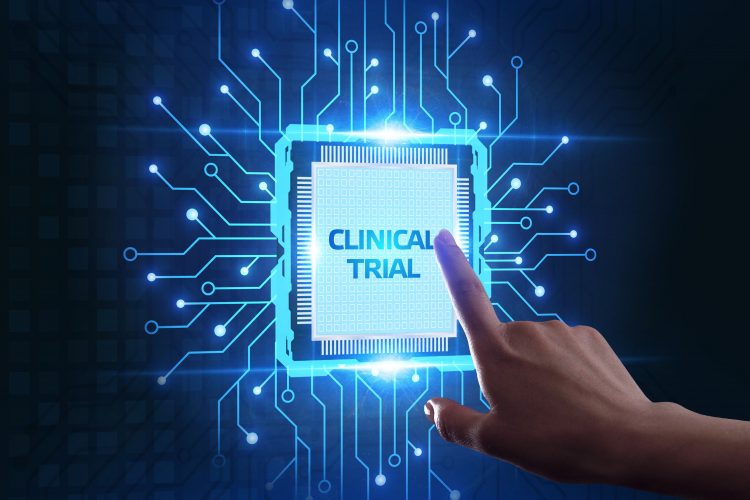 A new study found that an in silico model using virtual patients was as effective at evaluating a medical device used to treat brain aneurysms, as traditional trials involving patients. According to the researchers, in silico trials could revolutionise clinical testing, reducing both the time and cost of developing novel medical devices and drugs, while also while reducing human and animal harm in testing.

In silico trials use digital simulations of patient groups to evaluate an intervention. These virtual patient populations are developed from clinical databases to reflect age, sex and ethnicity but also how the disease affects the body: eg, the interactions between anatomy, physics, physiology and blood biochemistry. Those simulations are then used to model the impact of therapies and interventions.

In a new paper published in Nature Communications, an international research team led by the University of Leeds, UK, investigated whether an in silico trial could replicate the results of three, real-life clinical trials that assessed the effectiveness of a medical device called a flow diverter, used as a treatment for brain aneurysms. Brain aneurysms is a bulge in a blood vessel in the brain caused by the wall of the vessel weakening that can burst causing bleeding and stroke.

A flow diverter is a small, flexible mesh tube which is guided to the site of the aneurysm by a doctor using a catheter. Once correctly positioned, it directs blood along the blood vessel and reduces flow into the aneurysm, initiating a clotting process that eventually cuts the aneurysm off from blood circulation and heals it. 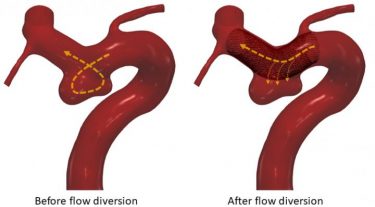 Effect of a flow diverter on blood flow around a brain aneurysm. Once the flow diverter is in place, it reduces blood flow to the aneurysm, allowing it to heal [Credit: University of Leeds].

The flow diverter performance assessment (FD-PASS) in silico trial modelled the treatment of intracranial aneurysms in 164 virtual patients with 82 distinct anatomies and used computational fluid dynamics to quantify post-treatment flow reduction. As the trial was virtual, the researchers were able to study different physiological conditions for each patient, such as normal and high blood pressure, and perform analyses on patient sub-groups, such as those with large aneurysms or aneurysms with a branch vessel.

The in silico trial predicted that that 82.9 percent of the virtual patients with normal blood pressure would be successfully treated with a flow diverter. This result was compared to the results of three real-life clinical trials – PUFS, PREMIER and ASPIRe, which had 109, 141 and 207 patients, respectively. In the trials, the number of people who were successfully treated was 86.8 percent, 74.8 percent and 76.8 percent, respectively, though approximately half the cases in the traditional trials had high blood pressure. Thus the investigators concluded that the in silico trial replicated the traditional clinical trials results.

Benefits of in silico trials

Professor Alex Frangi, Diamond Jubilee Chair in Computational Medicine and Royal Academy of Engineering Chair in Emerging Technologies at the University of Leeds, who supervised the study, said: “The results demonstrate the huge potential of in silico trials. We have shown that the approach can replicate the findings of traditional clinical trials – and they do that in a fraction of the time it normally takes and at a fraction of the cost.”

In the in silico trial, the researchers were also able to adapt their computational model to investigate new hunches or emerging scientific findings. For instance, by modelled the physics of blood flow and the biochemistry of blood clotting in aneurysms under different physiological conditions, they were able to identify sub-groups of patients at higher risk of stroke, with patients with large complex-shaped aneurysms at higher risk of haemorrhagic stroke and patients with hypertension at higher risk of ischaemic stroke.

The authors of the paper said this ability to rigorously analyse medical device performance would allow biomedical engineers to optimise device design and reduce the risks associated with treatment.

Additionally, Professor Frangi said: “In silico trials offer an opportunity to do virtual experiments that could explain concepts that are difficult to study in conventional clinical trials. The current approach to improve our understanding of new medical devices is slow, as conventional trials can easily take five to eight years, from their design to completion. In silico trials could reduce this period to less than six months in some circumstances, making knowledge and therapeutic technologies safer and more promptly available to clinicians and patients.”

The research involved an international collaboration of scientists from Leeds, the University of Oxford in the UK, Radbound University Medical Centre in the Netherlands, and KU Leuven in Belgium.

The research was funded through the Royal Academy of Engineering (INSILEX), @neurIST from the European Commission and the Engineering and Physical Sciences Research Council Centre for Doctoral Training on Fluid Dynamics.