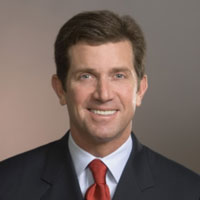 Johnson & Johnson today announced that its Board of Directors has elected Alex Gorsky Chairman, Board of Directors of Johnson & Johnson. Mr. Gorsky will assume the Chairman title and additional leadership responsibilities for the global health care company on Dec. 28, 2012; Mr Gorsky was appointed Chief Executive Officer of Johnson & Johnson in April 2012. Current Chairman Bill Weldon will step down as Chairman on Dec. 28, 2012, and announced plans to retire in the first quarter of 2013, after a brief transitional period.

“I am truly honored to succeed Bill Weldon as Chairman of Johnson & Johnson,” said Mr. Gorsky. “Bill’s leadership and contributions to Johnson & Johnson over a 41-year career leave us well-positioned to continue addressing the world’s most prevalent diseases and unmet needs in health care. Our financial strength, global reach, and innovations that help people live longer, healthier lives are a proud legacy for Bill and a strong foundation for the future of Johnson & Johnson.”

“Throughout his career, leaders from the public and private sector, from business and government, have all turned to Bill for his views on health care and corporate matters – a tribute to his leadership of Johnson & Johnson and his clear thinking on a broad range of complex issues and policies,” said Mr. Gorsky. “His advocacy for patients and his strong sense of corporate values will have a lasting influence on our company and our industry.”

“The Board gave thoughtful and rigorous consideration to our governance structure and determined that combining the chairman and CEO positions under the strong leadership of Alex Gorsky will benefit all our stakeholders,” said Presiding Director James Cullen.

The Board also indicated that it will enhance the Board’s governance structure by expanding the duties and responsibilities of the independent Presiding Director to include more involvement in stakeholder communications, board and executive performance evaluations, agenda-setting and succession planning. The duties and responsibilities of this position, which will carry the title of Lead Director, will be discussed in detail in the Company’s 2013 Proxy Statement.