Results from the StiL NHL-1 study… 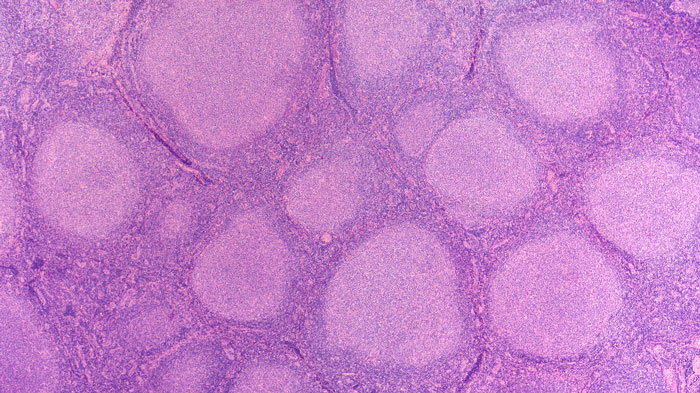 The statistically significant PFS benefit was maintained in the B-R group, regardless of age and across all subtypes; follicular lymphoma, MCL and Waldenström’s macroglobulinaemia, with the exception of marginal zone lymphoma, which was non-inferior.1

Patients receiving B-R experienced less myelosuppression, with severe neutropenia occurring in only 29% of patients compared to 69% with CHOP-R (p<0.0001).1 Infections, a challenging side effect of chemoimmunotherapy, were also significantly reduced with the B-R regimen (p=0.0025).1 A commonly acknowledged side effect of CHOP-R is hair loss; however, hair loss was not reported in a single patient receiving B-R (p<0.0001).1

“These results represent a significant breakthrough in cancer treatment for patients with indolent non-Hodgkin lymphoma and mantle cell lymphoma, who in the past have had to endure particularly aggressive and toxic chemotherapy combinations,” said Professor Mathias J. Rummel, Head of the Department for Haematology at the University Hospital in Giessen, Germany, who led the study. “Our study showed bendamustine and rituximab offered a significant improvement in PFS, and that the combination was better tolerated than CHOP-R. This means that the regimen, if approved by the regulatory authorities, could become the new preferred first-line treatment, capable of extending the time patients battling these malignancies live free of disease.”

“The results of this study are very encouraging for indolent non-Hodgkin lymphoma patients,” said Professor John Gribben, Chair of the International Workshop on non-Hodgkin Lymphoma. “The fact that bendamustine and rituximab results in fewer adverse effects with significantly better efficacy than the traditional CHOP-R treatment regimen indicates that this could be a new cornerstone in the treatment of NHL.”

Non-Hodgkin lymphoma (NHL) is the tenth most common cancer worldwide and figures from 2008 indicate that there are an estimated 356,000 new cases diagnosed every year, comprising two out of five haematological cancers.[ii] Indolent lymphomas represent 40% and MCL 3-10% of all NHL subtypes.1 The estimated average incidence of NHL in 2008 in the European Union is 10.8 per 100,000, with the highest estimated incidence being for men living in Luxembourg (around 19 cases per 100,000).2,[iii]

Bendamustine is currently licensed as a monotherapy for the treatment of iNHL in patients who have progressed during, or within 6 months following, treatment with rituximab or a rituximab containing regimen. Data from the StiL NHL-1 study have been submitted to regulatory authorities for their consideration of a bendamustine and rituximab combination as a first-line treatment for iNHL and MCL.

as first-line treatment for patients with indolent and mantle-cell lymphomas: an open-label, multicentre, randomised, phase 3 non-inferiority trial. The Lancet, 20 February 2013 (online publication, ahead of print).