Drug release could be tailored by adapting the type of starch used and the tablet shape, highlighting the promise of 3D printing for future personalised drug delivery applications. 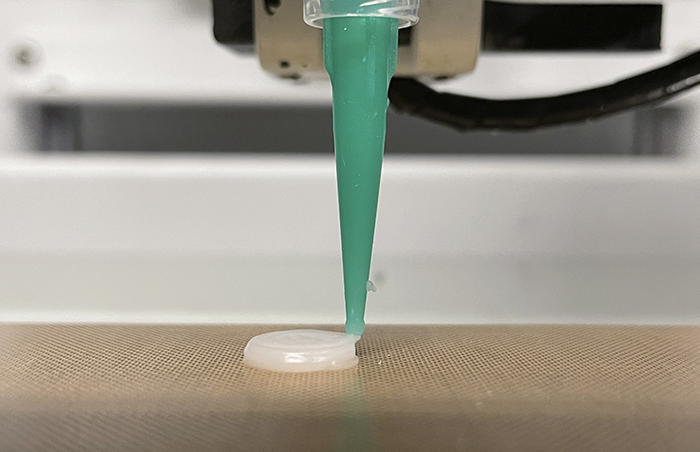 The aim of the study, published in the International Journal of Pharmaceutics, was to produce 3D printed starch-based tablets for the tailored delivery of hydrophobic drugs. Hydrophobic drugs – those that poorly water soluble – account for some 40% of marketed drugs and the 60% of the drug candidates in research, the paper notes.

The researchers acknowledged that starch is widely used as an excipient in the pharmaceutical industry. However, they hypothesised that using starches from different botanical origin would lead to different drug release kinetics.

“We were able to prepare tablets based on three types of starch – two types of maize starch (normal and waxy) and one type of potato starch – with different geometries and loaded with a non-soluble drug,” noted Kizkitza González, author of the study and member of UPV/EHU’s Materials+Technologies Group.

First, the gelatinisation parameters of the three starches and the printability of their inks were analysed using differential scanning calorimetry (DSC) and rheological measurements.

The three types of starch displayed appropriate rheological properties, although in the case of potato starch the printing process turned out to be more laborious.

Second, the influence of the botanical origin on the morphology, mechanical properties and swelling capacity of the 3D-printed tablets was evaluated.

“We observed the importance of the botanic origin of the starch in practically all the properties, such as porous microstructure, the formation of a stable network or the release of the drug,” said González.

“In the case of normal maize starch, drug release is instantaneous and the drug is fully released within 10 minutes; in the case of waxy maize starch and potato starch, release is more continuous and can take up to six hours for full release,” she added.

The researchers were also able to demonstrate the importance of tablet geometry in drug release.

González explained: “For example, in the case of an infection, in an initial stage using normal maize starch, a medicine could be released immediately to alleviate pain, and in a subsequent stage, with either of the other two types of starch, an antibiotic could be released more continuously.”

González stressed that the work is only the first stage in a long process, but she maintains that “the starch-based 3D printed tablets they produced displayed promising properties for future personalised drug delivery applications”.