AbbVie (NYSE: ABBV) released the first phase III results for the investigational three direct-acting-antiviral (3D) regimen plus ribavirin in patients chronically infected with genotype 1 (GT1) hepatitis C virus (HCV). In the 631-patient SAPPHIRE-I study, patients new to therapy receiving 12 weeks of AbbVie’s 3D regimen achieved a sustained virologic response at 12 weeks post-treatment (SVR12) of 96 percent. The majority of patients were GT1a, considered the more difficult-to-treat subtype, and the SVR12 rates of GT1a and GT1b were 95 percent and 98 percent, respectively. The rate of virologic relapse or breakthrough was low, occurring in 1.7 percent of patients receiving the 3D regimen. In addition, discontinuation rates due to adverse events were low, and of an equal percentage (0.6 percent) in both active and placebo groups.AbbVie’s multinational HCV program is the largest all-oral, interferon-free clinical program in GT1 patients being conducted to date. GT1 (with subtypes 1a and 1b) is the most prevalent genotype worldwide, with a higher prevalence of 1a in the U.S. and 1b in Europe. SAPPHIRE-I is the first of six phase III trials supporting AbbVie’s investigational 3D regimen for the treatment of GT1 hepatitis C patients.

“SAPPHIRE-I demonstrates that patients new to therapy with genotype 1 HCV achieved high rates of virologic response with AbbVie’s interferon-free, all-oral 3D regimen plus ribavirin, and the SVR rate is consistent with results from our phase II studies,” said Scott Brun, M.D., vice president, pharmaceutical development, AbbVie. “SAPPHIRE-I is the first of these studies to report results, and based on the progress of our clinical program to date, we are on track for major regulatory submissions in the second quarter of 2014.”

AbbVie will disclose detailed SAPPHIRE-I results at future scientific congresses and in publications.

SAPPHIRE-I is a global, multi-center, randomized, double-blind, placebo-controlled study to evaluate the efficacy and safety of 12 weeks of treatment with ABT-333 (250mg), ribavirin (weight-based), both dosed twice daily, and the fixed-dose combination of ABT-450/ritonavir (150/100mg) co-formulated with ABT-267 (25mg) and dosed once daily in non-cirrhotic, GT1a and GT1b HCV-infected, treatment-naive adult patients.

Additional information about AbbVie’s phase III studies can be found on www.clinicaltrials.gov.

The clinical program supporting our 3D regimen includes more than 2,300 genotype 1 patients in greater than 25 countries around the world. The AbbVie HCV clinical development program is intended to advance scientific knowledge and clinical care by investigating an interferon-free, all-oral 3D regimen with or without ribavirin with the goal of producing high SVR rates in as many patients as possible, including those that typically do not respond well to treatment, such as previous non-responders to interferon-based therapy or patients with advanced liver fibrosis or cirrhosis. Results from the remaining five studies in AbbVie’s phase III program will be available in the coming months, supporting regulatory submissions starting in the second quarter of 2014.

Overview of AbbVie’s phase III clinical programs is as follows: 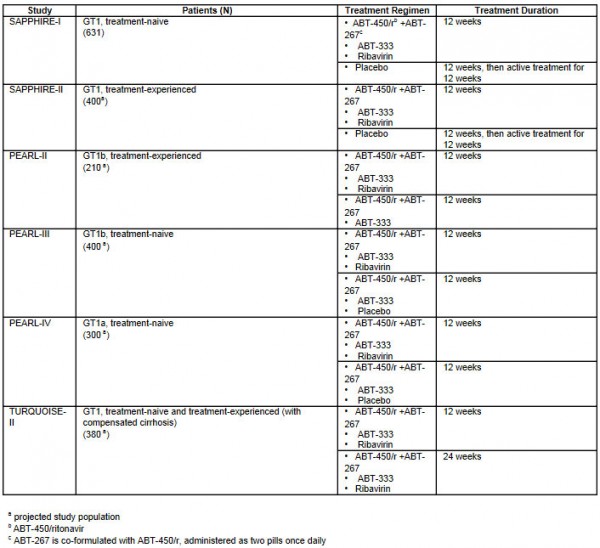 The 3D regimen consists of boosted protease inhibitor ABT-450/ritonavir, NS5A inhibitor ABT-267, and non-nucleoside polymerase inhibitor ABT-333. The combination of three different mechanisms of action interrupts the HCV replication process with the goal of optimizing SVR rates across different patient populations. In May of 2013, AbbVie’s investigational 3D regimen with and without ribavirin for HCV GT1 was designated as a Breakthrough Therapy by the U.S. Food and Drug Administration (FDA).

ABT-450 was discovered during the ongoing collaboration between AbbVie and Enanta Pharmaceuticals (NASDAQ: ENTA) for HCV protease inhibitors and regimens that include protease inhibitors. ABT-450 is being developed by AbbVie for use in combination with AbbVie’s other investigational medicines for the treatment of HCV.