How the implementation of Exalt™ for evaporative crystallisation studies improves stability and controlled delivery in drug development.

Polymorph screening is an important stage of drug development. The aim is to identify the different crystalline structures or polymorphs that a drug may appropriate… 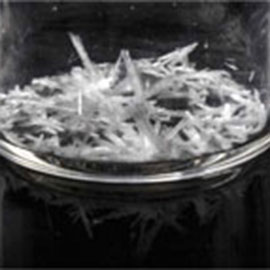 Background: Why there is a need for the Exalt™ application

Polymorph screening is an important stage of drug development. The aim is to identify the different crystalline structures or polymorphs that a drug may appropriate. The information gained is used to optimise the physical properties of the drug compound to ensure efficacy, and provide formulation and manufacturing consistency.

Once a drug compound is discovered, consideration must be given on how it will be administered to a patient. A drug compound may have poor water solubility, poor stability or a lack of crystalline form. This is usually overcome by creating a ‘salt’ version of the drug compound.

Compounds that are crystalline in nature, often adopt a number of crystalline forms or polymorphs. Different polymorphs will have different physical characteristics which can impact on the manufacturing process, which can affect the efficacy of the drug.

In the case of the anti-viral drug Ritonavir, not only was one polymorph virtually inactive compared to the alternative crystal form, but it was subsequently found to convert the active polymorph into the inactive form on contact due to its lower energy and greater stability, making spontaneous interconversion energetically favourable. Even a speck of the lower energy polymorph could convert large quantities of Ritonavir into the inactive polymorph, and this caused major production issues until the drug was finally reformulated.

It is also essential for all crystal forms to be listed on any drug patent. In the case of Prozac, an Eli Lilly drug, a generic drug manufacturer discovered another form not listed on the patent, and subsequently released a copy of the drug. A year prior to patent expiry, Eli Lilly lost several billion dollars in revenue as a result.

Regulatory authorities expect drug manufacturers to conduct thorough assessments of new drugs to form polymorphs. Pharmaceutical companies address the issues by carrying out a screen on the chosen compound to identify as many different polymorphic forms as possible. Ideally, this screen takes place at an early stage in the drug development cycle so that a manufacturing process can be defined to produce the correct form for clinical trials and the pharmaceutical market. A rational and extensive initial screen will be repeated as necessary throughout the project, for example, if the impurity profile of the material changes, the robustness of the crystallisation process will also be thoroughly investigated.

The screening process is time and resource consuming with no guarantee that all polymorphs will be discovered. It can also require a significant amount of active pharmaceutical ingredient (API). Polymorph studies are carried out manually, and each chemist usually employs slightly different approaches which can result in a lack of consistency.

Screening for polymorphs involves applying a wide range of crystallisation conditions in a number of solvents with diverse properties, (eg; polar, non-polar, aromatic etc). Applying different conditions to the materials in the solid phase may also generate new forms. Of particular importance is the variation of the rate of crystallisation – slower crystallisation typically yields thermodynamically stable forms, whereas faster experiments will produce metastable forms that may be kinetically preferred. When new forms are identified, they may, in turn, be used as input material for further experiments.

Studies for polymorph screening can therefore take a long time and may be difficult to conduct. Working with researchers in the field, Genevac Ltd has developed Exalt™, a unique toolkit to help researchers conduct evaporative crystallisation studies in a number of ways, whether polymorph screening, or searching for metastable and stable forms. Many crystallisation tools are currently available, and researchers usually use all of them in an effort to reduce the risk of new forms appearing later in the project. Although these techniques cannot all be replaced by Exalt™, most, if not all of the evaporative methods can be, so the crystalline forms of a drug can now be delivered in a controlled and reproducible manner. 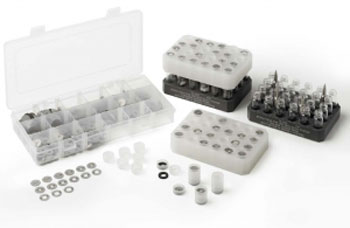 The Exalt™ toolkit for use in Genevac series 2, and the latest series 3 HT systems.

The development of Exalt™ by Genevac Ltd, began with a customer request to utilise evaporation in a controlled way to produce stable crystal forms, ie; very long evaporation times, (>72 hrs), evaporation of a wide range of solvents at the same time and at the same slow rate of evaporation for every solvent, volatile through to non-volatile. Analysis by X-ray diffraction (XRD) and Thermogravimetric differential thermal analysis, (TG-DTA) confirmed the presence of true polymorphism rather than solvation.

How does it work?

The Exalt™ software allows the pressure reduction from atmospheric and the cycle time to be carefully controlled so that evaporation can take place from 6 hrs to 72 hours or more. The condenser must be able to defrost automatically every 6 hours, or a large plug of ice forms in the condenser inlet.

The combination of pressure cycling and baffles delivers slow, controlled evaporation of different solvents at the same time and at similar rates. Studies of solvents with BP’s in the range 40⁰C to 165⁰C, DCM to DMAc (including water) have been made possible. 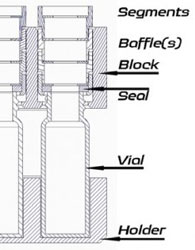 Pressure cycling creates a serial dilution of the atmosphere surrounding the samples. Spinning the rotor induces a vortex in the tower, promoting vapour diffusion. This “chimney” effect helps the non-volatile solvents. Baffles slow the flow of vapour from one chamber to the next.

Towers containing baffles sit on top of the vials. The baffles have varying diameter holes, and are selected depending on the solvent properties. More baffles, with smaller holes for volatile solvents, fewer, (or no) baffles and larger holes for non-volatiles.

The Exalt™ application will happily run on the new Genevac series 3 HT systems, or older, series 2 HT systems fitted with auto-defrost and drain condensers, ICOPS controls and version 3.06 software or later, to give an additional pressure control option, “crystallise”. This then enables the user to set the pressure reduction (from atmospheric) and the cycle time. The necessary upgrades are available on older series 2 HT systems, (depending on the age of the system, suitability can be checked by providing the manufacturer’s serial number).

During the summer of 2013, Researchers at Novartis Pharmaceuticals in Horsham, UK carried out a lengthy evaluation of eXalt™ technology to investigate how it may be applied to small molecule crystallisation processes in pharmaceutical chemistry R & D. A presentation with an account of this work is available below:- eXaltTechnology_NovartisPresentation 2013

Conclusions from this study were that Exalt offers a simple, reproducible method for evaporative crystallisation screening. The method is easy to use and allows late stage medicinal chemists to easily screen for crystalline forms with as little as 5mg of compound. Being non-destructive valuable compound is not lost and can be reused and knowledge gained can be used to develop a classic scalable crystallisation process. Crystals produced by exalt are high quality and suitable for XRPD analysis as well as for use as seed crystals.