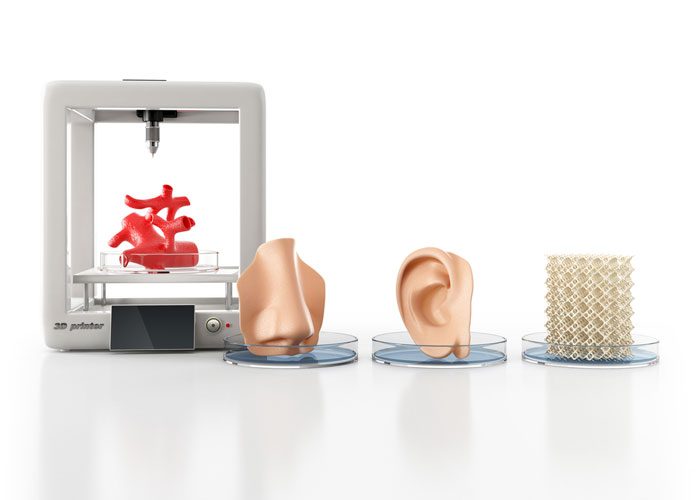 A team of Penn State engineers believe they have a way to create the structural framework for growing living tissue using an off-the-shelf 3-D printer.

The researchers’ report that their aim is to create a novel, low-cost and efficient method to fabricate high-resolution and repeatable 3-D polymer fibre patterns on nonconductive materials for tissue engineering with available hobbyist-grade 3-D printers. The method they use is a combination of 3-D printing and electrospinning, a method that uses an electric charge to spin nanometer threads from either a polymer melt or solution.

Currently, nearly all complex transplant tissues, from hearts and kidneys to tendons, come from living or dead donors. The researchers are looking for a way to grow replacement tissues reliably using inexpensive methods. The combination of 3-D printing and electrospinning to produce a scaffold for tissue engineering might also enable the production of combined muscles and tendons, or tendons and cartilage, for example.

“We are trying to make stem-cell-loaded hydrogels reinforced with fibres like the rebar in cement,” said Justin L. Brown, Associate Professor of Biomedical Engineering. “If we can lend some structure to the gel, we can grow living cells in defined patterns and eventually the fibres will dissolve and go away.”

“The overarching idea is that if we could multiplex electrospinning with a collagen gel and bioprinting, we could build large and complex tissue interfaces, such as bone to cartilage,” said researcher Pouria Fattahi. “Others have created these combination tissues using a micro-extrusion bioprinter.”

These current strategies create the different tissues separately and then combine them using some type of adhesive or connector. However, in the body, tissues such as cartilage and bone, and tendons and muscles, grow seamlessly together.

The researchers’ apparatus uses the electro-spinner to replace the extruder nozzle on the 3-D printer. The printer can deposit a precise pattern of fibres in three dimensions to form a scaffold in a hydrogel on which cells can grow. Once the tissue has grown sufficiently, the scaffolding can be dissolved, leaving only a structured tissue appropriate for use.

If two different tissues — muscle and tendon — are needed, the 3-D printer can alter the pattern of threads in such a way that the transition could be seamless with the appropriate cells, resulting in a naturally formed, two-part tissue replacement.

Using near-field electrospinning, the researchers first produced exceptionally thin threads in the micron and nanometer range. They next showed that they could grow cells on these fibres and finally, deposited patterned fibres into a collagen gel loaded with cells

The research has been published in the Journal of Advanced Healthcare Materials.