An international team of scientists has developed a water-soluble warped nanographene, that is biocompatible and shows promise for fluorescent cell imaging… 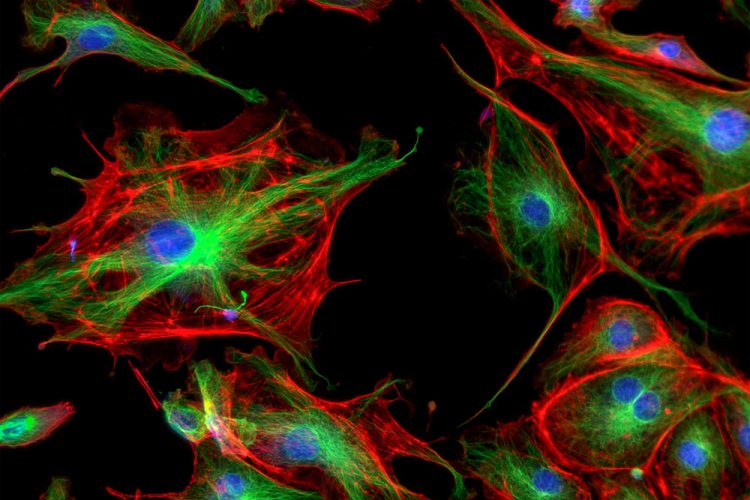 An international team of scientists has developed a water-soluble “warped nanographene”, a flexible molecule that is biocompatible and shows promise for fluorescent cell imaging. The nanographene molecule also induces cell death when exposed to blue laser light. Further investigation is required to determine how nano-carbons could be used for a range of biological applications, such as photodynamic therapy for cancer treatments.

A group of chemists and biologists at Nagoya University and Boston College, have succeeded in synthesising a water-soluble warped nanographene molecule that is water soluble for the first time. This new molecule expands the biological applications for nano-carbons, including cancer cell imaging and possibly eradication. 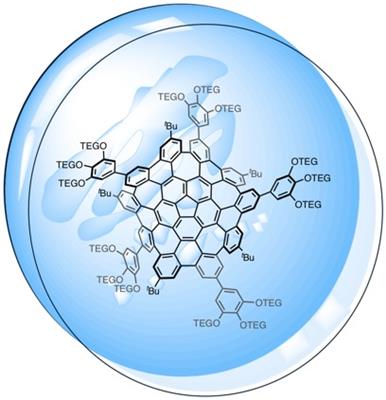 Nanographenes, nano-sized carbon molecules, exhibit unique electronic, optical and mechanical properties, and have been recognised as promising materials for electronic and biomedical purposes. However, the flat structure of nano-graphenes leads to stacking and aggregation in solvents, making it difficult to dissolve in various solvents and thus causing complications for biological applications.

In 2013, Professor Kenichiro Itami, director of the JST-ERATO Itami Molecular Nanocarbon Project and the Institute of Transformative Bio-Molecules (ITbM) at Nagoya University and his co-workers synthesised a warped nanographene molecule with a saddle-shaped structure. The unique organisation of the molecule’s 26 graphene rings prevents aggregation, making it soluble in most common organic solvents. Moreover, it exhibits green fluorescence when irradiated with ultraviolet or blue light.

“We were really excited when we succeeded in synthesising the warped nanographene molecule, and we were interested in making it available for biological applications, which we achieved by adding water-soluble functional groups to the molecule,” says Prof Itami.

In the latest study, Prof Itami’s group explains how they developed a straightforward route to make warped nano-graphenes water soluble. First, they replaced five hydrogen atoms with boron moieties, through an iridium-catalyzed C–H borylation reaction. The boron-substituted warped nanographene is then mixed with a compound, called an aryl halide, containing water-soluble chains. A palladium-catalysed Suzuki-Miyaura coupling reaction leads to the water-soluble chains attaching to the edges of the nanographene molecule, making it soluble in water and other organic solvents. This method can also be used to install other functional groups to warped nanographene to easily tune its properties.

The team examined the fluorescent properties of water-soluble warped nanographene. They found that under ultraviolet light, the molecule fluoresced yellow when dissolved in water, and fluoresced green when mixed in the common organic solvent dichloromethane. The new nanographene showed high photostability, meaning that its properties do not change when exposed to light. Rather, the colour of fluorescence changes according to the polarity of the solvents that they are dissolved in.

Next, Prof Itami’s team collaborated with ITbM’s biologists to test if the new molecule could stain live cells for fluorescent cell imaging. They treated HeLa cells, a strain of cervical cancer cells widely used in research, with a water-soluble warped nanographene solution. Microscopic observations showed that the cells took up the molecule over a few hours and it accumulated in the lysosomes, which are organelles found in cells. Cell viability did not change significantly over time, demonstrating that water-soluble warped nanographene has low cytotoxicity and could be used as a fluorescent stain for HeLa cells.

“Although our new warped nanographene has low toxicity to HeLa cells, we were surprised to find that cell death was observed upon irradiating light to the cells stained with the new nanographene,” says Prof Itami.

The specific mechanism of how this cell death occurs is not clear yet, but the group speculates that a toxic singlet oxygen molecule is generated during irradiation and is responsible for cell death. Several other compounds are known to cause photo-induced cell death, but there is still a need to discover molecules that can absorb longer wavelengths to be safely used to treat cancer cells in deep tissues. The researchers envisage that their method to functionalise and tune warped nano-graphenes could lead to biocompatible molecules that absorb different wavelengths of irradiation.

Light-induced cell death in the presence of water-soluble warped nano-graphenes.

“We have succeeded in synthesising a water-soluble warped nanographene showing fluorescence, good photostability and low cytotoxicity, which makes it promising for bioimaging,” says Prof Itami. “This achievement is an excellent example showing the output of the extensive collaboration between chemistry and biology ongoing at our institute. We hope that our molecules can be developed further for a wide range of biological applications through further interdisciplinary collaborations.”

The outcome of this study not only demonstrates the power of nano-carbons for biological applications but also shows the rewarding synergy between synthetic chemistry and biology.

The study has been published in the journal Angewandte Chemie International Edition.