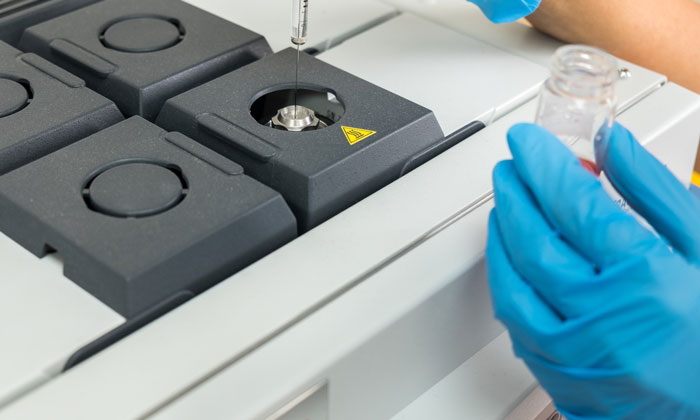 One of the key challenges of proteomics is managing to distinguish between molecules that are structurally different yet have the same mass. This is hard because a mass spectrometer works like a weighing scale, sorting the molecules analysed according to their mass.

One way to reduce confusion when using a mass spectrometer is to start by submitting the sample to liquid chromatography, which separates hydrophilic proteins from hydrophobic ones. The hydrophilic proteins enter the spectrometer first, and the most hydrophobic are left for the last, decreasing the likelihood that two different molecules with equivalent masses will be interpreted as only one by the apparatus.

“It’s like solving a jigsaw puzzle with millions of pieces. When you first open the bag, the pieces are all jumbled and overlapping. You must begin by sorting them out. As we work with proteomics, we constantly endeavour to develop more refined sorting techniques,” said Daniel Martins-de-Souza, who heads the Neuroproteomics Laboratory at the University of Campinas (UNICAMP) in Brazil.

In a study with results published in Proteomics, Martins-de-Souza’s group optimised a method to increase the resolution of proteomic analysis by mass spectrometry. Thanks to a combination of two other techniques – two-dimensional liquid chromatography and ion mobility – the group succeeded in identifying 10,390 proteins expressed in oligodendrocytes, the central nervous system cells responsible for producing myelin, a lipidic substance that plays an essential role in the information exchange between neurons.

With FAPESP’s support , the UNICAMP group have studied the human oligodendrocyte proteome for several years, with the aim of better understanding the causes of schizophrenia as a basis for proposing novel therapeutic approaches.

“We now have a far more complete oligodendrocyte protein database, which will be useful for our own studies and those of other researchers in the field,” Martins-de-Souza said. “It’s available online, and the data can be downloaded. In addition, the optimisation technique can be used to study the proteome of any biological sample.”

In a previous study using single-dimensional liquid chromatography for pre-sorting, the group had identified only 2,290 proteins in oligodendrocytes.

According to Martins-de-Souza, currently available treatments for schizophrenia focus on neurons, but the neural communication failures observed in patients may be due to oligodendrocyte dysfunction.

“One of our research lines consists of evaluating how the drugs used to control schizophrenia modify the oligodendrocyte proteome,” he said. “With this new methodology, we can obtain five times more information on the role of these drugs.”

The study was conducted during the postdoctoral research of Juliana Silva Cassoli and the master’s research of Caroline Brandão Teles, both with scholarships from FAPESP and supervision by Martins-de-Souza.

The first step in proteomic analysis using mass spectrometry is to break down the proteins extracted from the biological sample of interest, which in this case consists of oligodendrocytes, into smaller particles called peptides.

“A small protein can give rise to at least 10 different peptides. The spectrometer isn’t good at analysing the entire molecule because of its large size,” Martins-de-Souza explained.

Next the group submitted the sample to separation by chromatography. Instead of using a single matrix, as in the conventional technique, they used two. In the first separation, only a fifth of the injected peptides entered the spectrometer in liquid form. This was followed by another fifth in the second separation, and so on.

Inside the spectrometer, the sample is transformed into gas and flies back and forth in a vacuum. The smaller the peptide, the faster it reaches its destination, and the apparatus then measures its mass.

As the molecules are flying about inside the spectrometer, the ion mobility technique injects a small amount of gas into the apparatus through a tube.

“The resistance offered to the gas by the molecule depends on its three-dimensional shape, so if two different peptides with the same mass are flying together and we inject the gas in the opposite direction, they will tend to be separated by the force of resistance to the gas. It’s like picking up two sheets of paper with the same mass, crumpling one into a ball, and dropping them both. Because of its shape, the crumpled sheet will reach the floor first,” Martins-de-Souza explained.

At the end of the experiment, the more than 223,000 peptides identified by the spectrometer were reconstructed using bioinformatics tools, resulting in the 10,390 proteins described in the paper. The group also used bioinformatics to map the cellular compartments in which the proteins are located and the biological processes in which they are involved.

“Ideally, it should be possible to identify at least two peptides per protein. That way, we can be sure a molecule is really present in the sample, since two proteins with two exactly identical peptides are unlikely to occur. In this study, about 20% of the proteins were identified by more than 20 peptides,” Martins-de-Souza said.

The methodology enabled the researchers to identify even proteins that were relatively scarce in the sample, i.e., in quantities some 10 million times smaller than those of the most highly expressed molecules.

“One of the problems with mass spectrometry is that a very large piece of the jigsaw puzzle may hide several smaller ones. However, with an effective tool to spread out the pieces, you can see practically all of them,” Martins-de-Souza said.

The way ahead for chromatography systems after the pandemic