In the future, venomous snakebites could be treated using nanoparticles to bind the venom toxins and prevent them from spreading around the body… 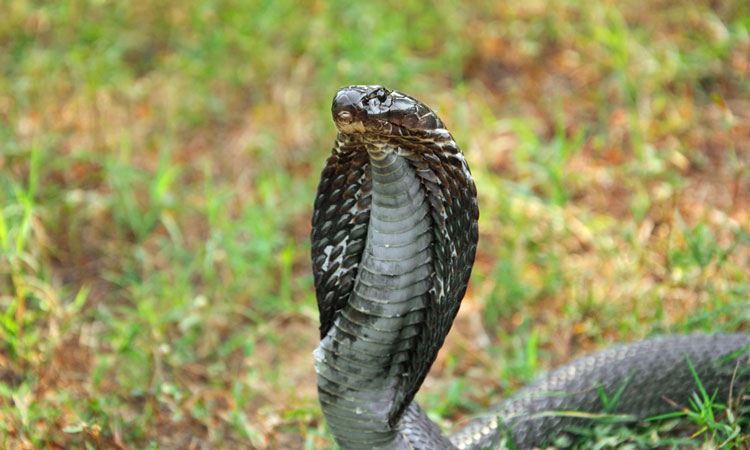 Researchers have identified a new way of treating snake bites, using nanoparticles to bind to venom toxins, preventing the spread of the venom through the body.

Venomous snakebites cause over 100,000 deaths annually, and leave over 400,000 individuals with permanent trauma each year. Snakebites affect 2.5 million people annually.

The standard treatment for snakebites is the intravenous administration of IgG immune molecules that recognize venoms. However, such antivenom therapies must be administered quickly–and by trained healthcare workers– to be effective and are highly specific to particular venoms. There is an ongoing need for a snakebite treatment which can be used in a rural setting and works against the bites of diverse venomous snakes.

In the new work, Dr Kenneth Shea, of the University of California, Irvine, and colleagues engineered nanoparticles that bind to and sequester an array of phospholipases A2 (PLA2)and three-finger toxin (3FTX) molecules found in Elapidae snake venoms. The Elapidae family is a large family of venomous snakes that includes cobras, kraits, tiger snakes, sea snakes, coral snakes and mambas, among other species. The researchers tested the ability of the nanoparticles to block Naja nigricollis (black-necked spitting cobra) venom in mice that received varying doses of the nanoparticles, injected into the skin. Envenomings by this snake in sub-Saharan Africa inflict serious cutaneous necrosis that may leave permanent tissue damage in the victims.

In experiments on isolated cells, the nanoparticles were found to sequester a wide range of Elapidae PLA and 3FTX venoms. Moreover, with collaborator Dr José María Gutiérrez from the Instituto Clodomiro Picado (Universidad de Costa Rica), experiments with mice demonstrated that injections of the nanoparticles at the site of venom injection significantly mitigated the typical necrotic effects–including blistering and ulcers– of the spitting cobra venom. The nanoparticles administered to mice that had not received venom did not have an effect on skin and did not induce systemic toxicity.

“The stable, low-cost nanoparticles have the potential to be administered subcutaneously immediately after the bite at the site of envenoming by this spitting cobra to halt or reduce the extent of local damage and mitigate the systemic distribution of toxins post-envenoming,” the researchers say.

The researchers reported their findings in PLOS Neglected Tropical Diseases.