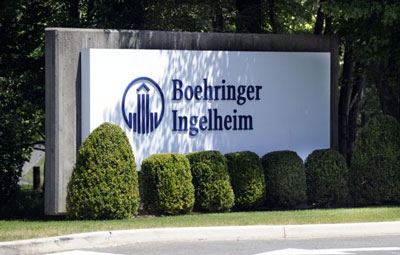 “We are pleased that, Boehringer Ingelheim has further developed positively in line with our expectations, particularly also through innovative medications that are ready for the market“, Professor Andreas Barner, Chairman of the Board of Managing Directors, underlined. “Our vision – Value through Innovation – thereby proves itself sustainably as the basis of our company.”

Overall, Prescription Medicines’ net sales amounted to EUR 4.9 billion in the first half-year, broadly in line with the previous year’s level. After currency adjustment and taking into account structural business conditions (e. g. the expiry of exclusivity on medications in the USA and Germany), business grew by 10 percent in local currency terms, particularly in the USA, Japan and Canada. Some 60 percent of the increase in net sales was borne by the new launches of Pradaxa® (anticoagulant), Twynsta® (antihypertensive) and Tradjenta® (diabetes treatment). But established prescription medicines, such as Spiriva® and Micardis®, also showed market increases, with growth of 10 and 11 percent respectively.

“For Boehringer Ingelheim the first half of business year 2011 is characterised in turnover terms by successful new launches. A good earnings position overall has enabled us to activate again higher investment in research and development, even though further burdensome interventions by the legislators in price-setting for prescription medicines have had a negative effect,” explained Hubertus von Baumbach, Member of the Board of Managing Directors responsible for Finance. Operating income in the first half-year has developed more positively compared to the previous year.

The turnover of the Consumer Health Care business amounted to EUR 667 million, or 11 percent growth towards the first six months of the previous year in local currency terms. The gratifying increase in net sales of cold medications in Europe contrasted with depressed growth in the self-medication business in Japan (- 6 percent in local currency terms). The prolonged stagnation of the self-medication market was furthermore negatively impacted by the consequences of the earthquake and the tsunami.

In the emerging markets, Boehringer Ingelheim was able to increase its Human Pharmaceuticals’ net sales by some 12 percent overall to EUR 890 million. Here, China, Russia, Venezuela and Mexico were the companies with the strongest growth.

The Industrial Customer business achieved EUR 332 million net sales in the first half of 2011, or 13 percent more than during the same period of the previous year. This development is primarily attributable to increased turnover in the development and production of biopharmaceuticals for third party customers. Other third party business was reduced by 9 percent.

The Animal Health business achieved net sales of EUR 468 million in the first half of 2011, thereby growing three percent over the first half of last year in local currency terms. The important growth driver was again the innovative swine vaccine Ingelvac® CircoFLEX, with net sales growth of 10 percent compared to the same period of the previous year.

New substances from the company’s own research and development made further progress, Prof. Barner stressed. A row of new biological and chemical active ingredients were transferred from the preclinical stage to clinical development. Furthermore, substances in the late development phases were progressed according to plan.

The novel, direct thrombin inhibitor Pradaxa® (dabigatran etexilate) has thereby achieved another important milestone: it was approved Europewide for the prevention of stroke and systemic embolism in patients with atrial fibrillation (AF). Millions of AF patients throughout The European Union could now benefit from this new medication whose registration for stroke prevention represents the greatest advance in anticoagulation therapy for more than 50 years. Outside the European Union, dabigatran etexilate has already been granted approval for prevention of stroke in AF patients in the USA, Canada, Japan and other countries on four continents.

In addition, linagliptin, a dipeptidylpeptidase-4 inhibitor (DPP-4 inhibitor), has already received approval from the authorities in the USA (as Tradjenta®) and Japan (as Trazenta®). It is the first substance from the diabetes alliance between Boehringer Ingelheim and Eli Lilly & Company and was developed as a tablet taken once daily for the treatment of adults with type 2 diabetes. The European Medicines Agency‘s (EMA) Committee for Medicinal Products for Human Use (CHMP) in June 2011 recommended approval of linagliptin (planned brand name Trajenta®).

The personnel capacity of Boehringer Ingelheim’s international group of companies, as of 30 June 2011, stood at 42,486, or 4.8 percent (+1,957 positions) higher compared to the first half of the previous year.