A research group has designed a pills-on-a-coil system to administer drugs without having to take pills. 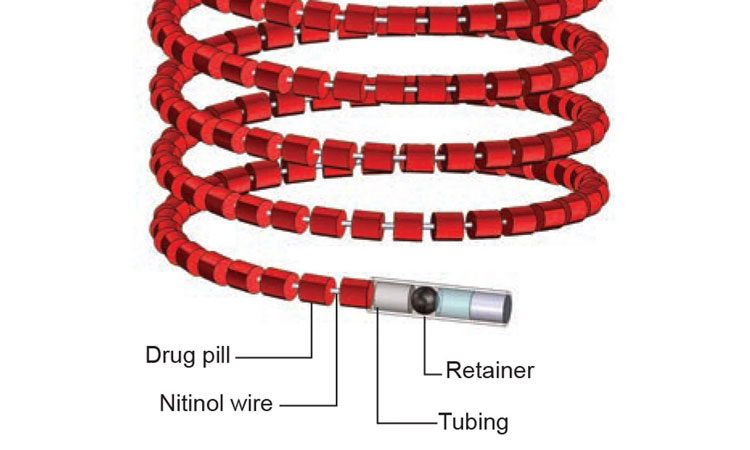 The group have worked on a capsule that can be swallowed and then unfolds into a star shape with six arms once it reaches the stomach. Because of its size, shape, chemical and mechanical properties, the star can stay in the stomach for weeks.

Each arm of the star can hold a different drug and slowly release it.

After the drugs have all been released, the star can be triggered to break apart and pass through the intestine safely. However, this system is limited by the mass of drug it can dispense. Because it is swallowed, it can hold at most just 1 gram of drug. But a daily dose of antibiotics for the disease tuberculosis (TB), for example, requires more than 3 grams of the drug.

Therefore, the research group has designed a pills-on-a-coil system that can hold and release at least 10 grams of drug for one month which they tested in pigs. This system is able to dispense the quantity of antibiotics necessary to treat TB for one month.

The group’s pills-on-a-coil system consists of a coiled wire upon which medication is strung. The ends of the wire are protected in a piece of tube with a magnet. The wire is superelastic and can be stretched to pass through the esophagus and then form a tight coil when it reaches the stomach. Cylindrical drug pills are made from mixing the drug with silicone followed by coating a thin layer of Eudragit RS 100.

Silicone and Eudragit RS 100 are common materials used in long-term drug delivery to provide slow drug release. All pills simultaneously release a predictable amount of drug into the stomach. Once all drugs from the pills have been released, a separate retrieval device with a magnet can sense, attach and remove the coil from the stomach.

The group anticipate multiple applications of the pills-on-a-coil system for treating a variety of diseases by making it easier for patients to finish their regimens and get cured. Initial safety studies of the device will be conducted in the US and the group hope that clinical trials will begin in five years.