As the industry approaches the five year anniversary of the ground breaking regulator initiatives (the ‘PAT framework’ and ‘cGMPs for the 21st Century’1,2), it is time to assess the impact they have had on the industry and to look forward to what the industry may look like in another five years time. In some ways the initiatives need to be considered as ‘facilitators’, enabling the business driven activities (which had already started in many pharmaceutical companies) to flourish; these activities, driven by reducing risk by increased process understanding, were already common in other advanced manufacturing industries. 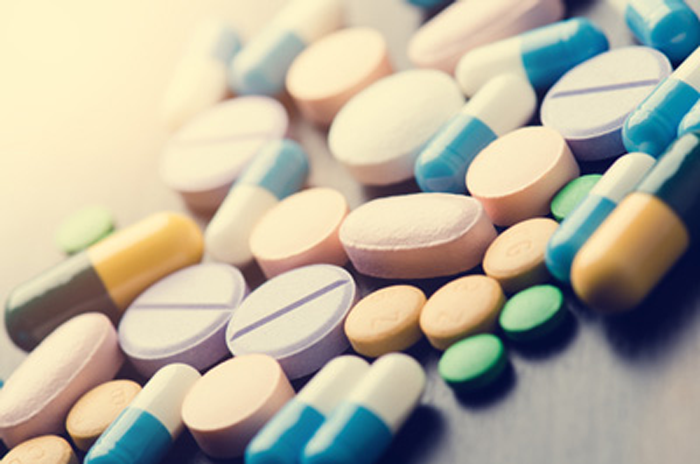 So what has the impact been?

Firstly there was always a clear intention to generate ‘relevant’, industry wide, standards (as part of the activity), and there has been regular and continuous progress in that area. The definition of the term PAT became standardised (recognised by FDA, ASTM and ICH) and ICH generated the ‘quality trio’ – Q8 (Pharmaceutical Development), Q9 (Quality Risk Management) and now the third part Q10 (Pharmaceutical Quality System) which was finalised for adoption in June 2008. However even here the ‘inherent behaviour of the industry’ became apparent and it was necessary to publish an annex of Q8, not to change the guidance but to give examples to follow. ASTM setup the E55 committee which now has five active sub-committees; E55.01 (PAT System Management), E55.02 (PAT System Implementation and Practice), E55.03 (General Pharmaceutical Standards), E55.90 (Executive), E55.91 (Terminology), E55.92 (Awards). The activity has not been exclusive to the ‘standards bodies’ and organisations such as ISPE ‘s Design Space Task team have made advances working under their Product Quality Lifecycle Initiative (PQLI). These activities have also introduced new terminologies; Design Space (…the multidimensional combination and interaction of input variables (e.g., material attributes) and process parameters that have been demonstrated to provide assurance of quality…3) and Quality by Design (QbD), a term which has now widely replaced the use of ‘PAT initiative’. However the intention of the initiatives were not simply to generate new standards but to change behaviours and move pharmaceutical manufacturing from an art to a science, the new ‘standards’ were to facilitate that change.

So, five years on has the ‘inherent behaviour’ changed? The changes in regulation and relevant standards have removed any (perceived) barriers to change and science based/risk assessment approaches are now used by some in new product development and by others in reducing variance on existing product lines. But the industry is still wrestling with the behavioural conflict; do you manage risk or try to avoid it? In the past the focus, and behaviour, was on avoidance. The necessary change to risk management is highlighted in the new draft Process Validation guidance4. The guidance (although not currently for implementation) dispels the old ‘3 batch validation’, risk avoidance, approaches and replaces it with a three stage activity:

“Process Design” (the building and capturing of process knowledge and understanding, followed by establishing strategy for process control)

“Continued Process Verification” (where it is shown that the process is in a state of control during routine production).

This last stage is much more than avoiding deviation. It is around the use of statistical tools to establish the significance of any process variance and ensure that the speed and direction of that variance will not cause a deviation; this means not just looking at within batch but also intra-batch variance. This is a very different culture to that previously required within pharmaceutical development and manufacturing. Other industries have established models for ‘technology uptake’ and they broadly fall into two categories. The traditional (and the one most often quoted during the early years of PAT) is based on end user types; the Innovators who sit on the ‘bleeding edge’, the Early Adopters who ‘manage risk and take the chance’, then the Early and Late Majorities who ‘avoid the risk’, before lastly Laggards. We have to acknowledge that without those at the ‘bleeding edge’ the opportunity would not arise for others. But the decision whether to be an Early Adopter or one of the Early Majority (or later) is one based on risk culture, and leads to a ‘chasm’ opening between the two. However this is not the only ‘uptake model’. Another, more recent, uptake model is used in the IT industry; it is known as the Gartner Hype Model. The Hype model describes how a technology innovation leads to an initial peak of inflated expectation, and failure to deliver leads to a trough of disillusionment, before going through a slope of enlightenment and reaching a plateau of productivity.

These two models accurately reflect the status of the PAT initiative today. Those whose culture is still risk avoidance are firmly to the right hand side of the traditional model, with no intention of risking failing in the ‘chasm’. Those who have changed to a risk management culture are somewhere on the Gartner Hype Model curve; there was a considerable initial ‘hype’ (which certainly led to a peak of inflated expectation), this was primarily based on impressions that ‘PAT’ could simply be purchased, then would plug’n’play. But those that managed the risk (and didn’t get too carried away with the hype) are now coming out of the other side – they are somewhere on the slope of enlightenment, with the benefits in front of them. The model can also be applied to the vendors/supplier community, many have gone through the cycle as well, but now face a positive future having found the applicability for their solutions; applicability which only comes from ‘enlightenment’.

So as for the next five years; although the near future looks positive for those who have gone through the culture change, the concern is for those still standing to the right side of the first model, carefully avoiding falling in the ‘chasm’. The industry is under huge economic/efficiency pressures which are gradually eroding the landscape. There already is no room for the Laggards, and the area the Late Majority is occupying is being eaten away – there soon will be no choice but to fall into the chasm, as the ground they were standing on, simply, will not be there any more. 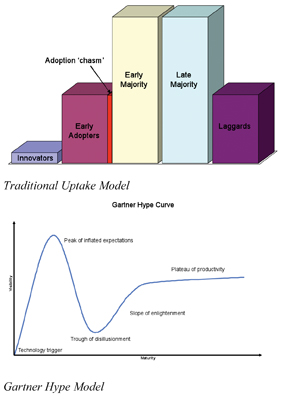