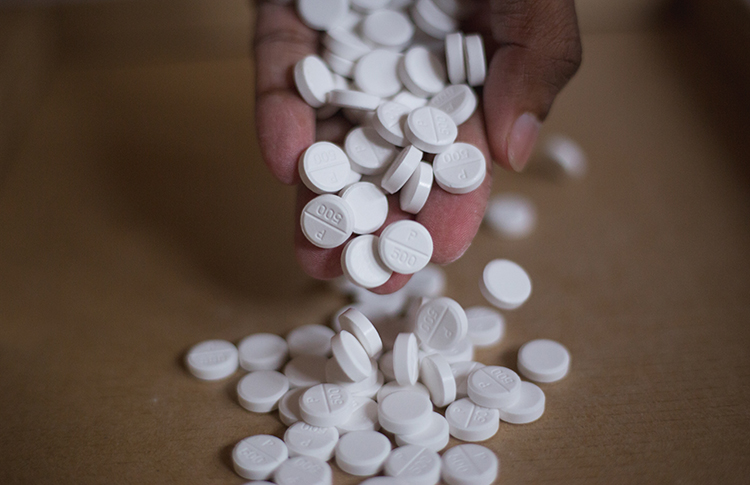 THE DISCOVERY of metformin started with the synthesis of galegine-like compounds derived from Galega officinalis; a plant that has been used as a drug for treating diabetes in Europe for centuries. Metformin acts primarily at the liver by reducing glucose output and secondarily by augmenting glucose uptake in the peripheral tissues (mainly muscle). Metformin’s efficacy, safety profile, beneficial cardiovascular and metabolic effects, as well as its capacity to be associated with other anti‑diabetic agents, makes it the first glucoselowering agent of choice when treating patients with type 2 diabetes mellitus.

Thus far, metformin is the only anti-diabetic agent that has shown reduced macrovascular outcomes, which is likely explained by its effects beyond glycaemic control. It has also been employed as an adjunct to lifestyle modifications in pre-diabetes and insulin-resistant states.

Although monotherapy with an oral hypoglycaemic agent is often initially effective, glycaemic control deteriorates in most patients, which requires the addition of a second agent.

Gastrointestinal side-effects are common with the use of immediate-release (IR) metformin and are usually associated with rapid titration and high-dose initiation of the drug. These effects are generally transient, arise early in the course of treatment and tend to subside over time. The gastrointestinal side-effects can be addressed by taking the agent with meals, reducing the rate of dose escalation or transferring to a prolonged-release formulation (XR). Metformin XR formulations release the active drug through hydrated polymers that expand after uptake of fluid, prolonging gastric residence time and leading to slower drug absorption in the upper gastrointestinal tract, allowing for once-daily administration.

Metformin XR has been associated with improved tolerability and increased compliance. A large proportion of metformin tablets (either IR or XR formulations) produced globally are film coated for a variety of reasons, including aesthetics, taste or odour masking, enhanced mechanical strength, improved swallowability and/or protection from environmental conditions (eg, moisture, light or air).

The focus of this case study was to develop a valid methodology to shift production of metformin tablets to the largest available equipment. Tablets containing metformin and sitagliptin (weight 1,300mg, friability 0.8 percent, hardness 280N, density 0.75kg/L) were coated in a pilot coater (Perfima Lab drum 70L) to first evaluate all optimal coating conditions for product quality and secondarily to find out the maximum spray rate/nozzle to have as a starting point for subsequent scale up.

In a previous study, the dependency of the coating result on the dispersion uptake of a single core was investigated. As it is difficult to apply the results of these calculations practically, the number of nozzles can be taken as a measure for this parameter. It was shown that by keeping the ratio of spray rate and inlet air quantity, as well as the spray rate per nozzle and the drum peripheral speed constant, comparable results in different scales could be achieved.

This methodology ensures similar humidity exposure to all tablets in transit below the spray pattern: since the limiting factor is air availability and the mechanical pressure on the cores, step-up processes were used to successfully increase the drum scale from a 70L to a 800L coater.

Coating formulation in all trials for a more than three percent theoretical weight gain can be seen in Table 1. Table 2 describes optimal process parameters to achieve good coating quality and process equilibrium. 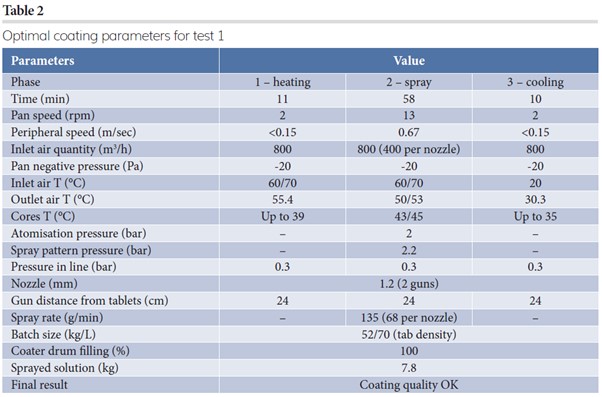 In the first test, the spray rate per nozzle was kept at 68g/min/nozzle and inlet air flow rate at 400m3/h/nozzle, while peripheral speed was maintained at 0.67m/sec during the spray phase. The final result was optimal. For the subsequent industrial step, an evaluation of the maximum achievable spray rate/nozzle was fundamental and the result of test two is reported in Table 3. 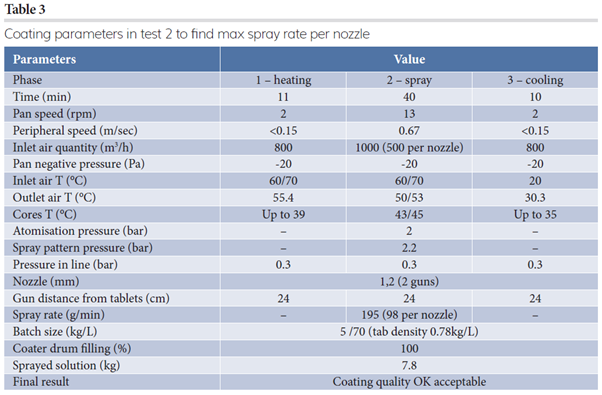 Based on preliminary results, test three was performed on a Perfima 200 (250L drum) at the maximum filling percentage (Table 4). The tablet bed is deeper and larger in bigger equipment, making a linear scale up quite complex; therefore, in this paper we discuss step-up processes. 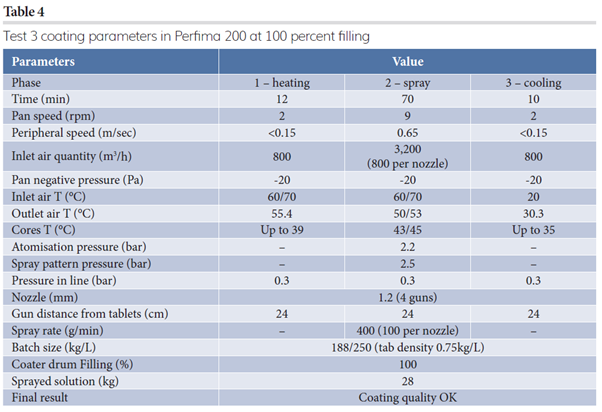 Final implementation was conducted for further step-up of processes in even larger equipment – Perfima 500 (550L drum) – trying to maintain similar ratios of spray rate/nozzle (Table 5). Given that the inlet air amount cannot be scaled up linearly, the inlet air temperature (T) had to be adjusted accordingly. 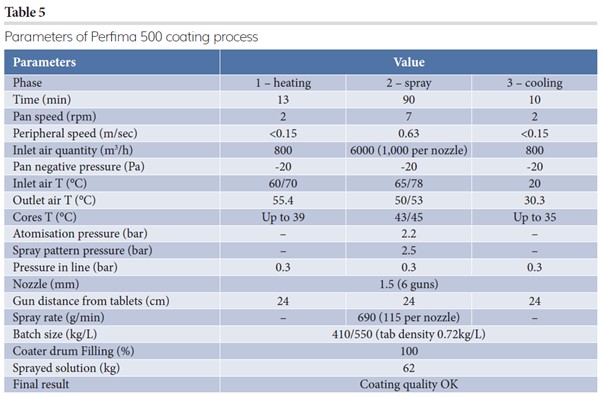 The last step of this case study was to bring production to a Perfima 800 (950L coater). With this equipment, due to the large amount of tablets, smoothness of mixing played an important role in ensuring the tablets were treated gently during coating and handling steps. Parameters of the Perfima 800 process are reported in Table 6. 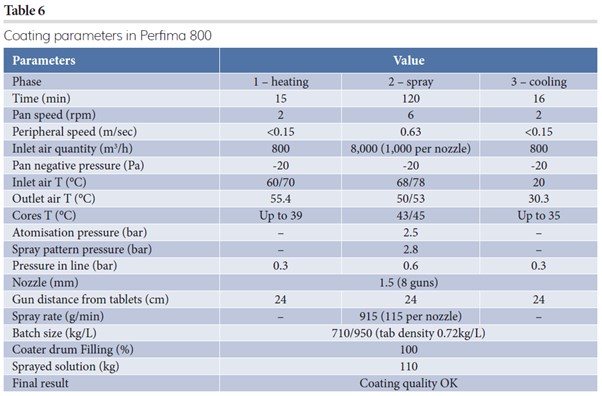 In all trials, comparable results regarding coating quality were achieved. This was firstly due to the geometric similarity of all equipment involved, which is guaranteed by the Perfima design.

The process was first studied on a lab (or pilot) scale machine and the extreme process conditions found were the base for the following scale up. Due to the variations in inlet air amount available at different scales causing an increase in the charge of the tablets, the max spray rate per nozzle was chosen to keep a comparable and reasonable coating time during the step-up process, as shown in Table 7.

In all the trials, a good surface coating was achieved and coating losses were kept in the range of seven to 13 percent. The lower coating losses were observed in the large production cycles, potentially due to better polymer uptake and distribution. Therefore, the production of coated metformin tablets is more suited to larger batches, which is appealing for the growing market.

J&J to pay up to $5bn in US opioid settlement